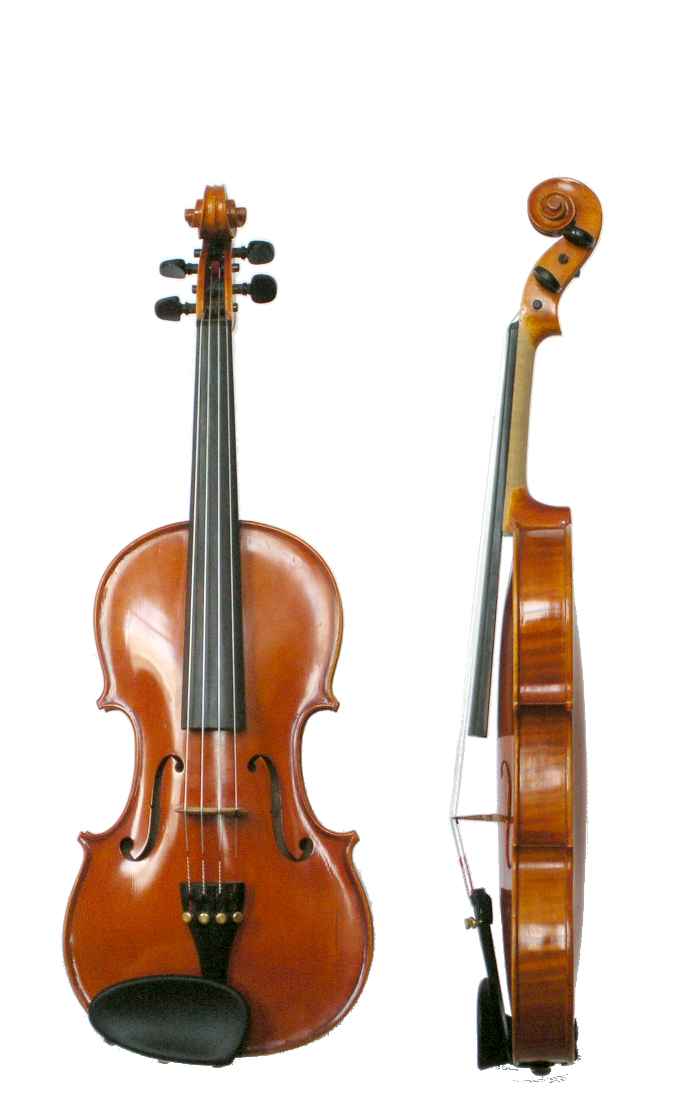 classification= (bowed)
range=
related=
* (, )
* family (includes )
musicians=
*
builders=
*
articles=ViolinThe term fiddle refers to a ; it is a colloquial term for the instrument used by players in all genres, including classical music. Fiddle playing, or fiddling, is a style of music.

Any violin may be informally called a fiddle, regardless of the kind of music being played with it.

"Fiddle" has a more generalized meaning than "violin". Whereas "violin" refers to a specific instrument, "fiddle" may be used to refer to a violin or any member of a general category of similar stringed instruments played with a horsehair bow, such as the , the Chinese , the Welsh , the , the in the context of a Scottish violin/cello duo ("wee fiddle and big fiddle"), the ("bull fiddle" or "bass fiddle"), and so on.

The of "fiddle" is uncertain: the Germanic "fiddle" may derive from the same early Romance word as does "violin", or it may be natively Germanic. [cite encyclopedia
url = http://dictionary.oed.com/cgi/entry/50084343?query_type=word&queryword=fiddle&first=1&max_to_show=10&sort_type=alpha&result_place=1&search_id=aqCu-MRFGqf-11482&hilite=50084343
title = fiddle, n.
encyclopedia = Oxford English Dictionary, 2nd ed
publisher = Oxford University Press
date= 1989
accessdate = 2008-03-28: "(as access to the OED online is not free, the relevant excerpt is provided)" "The ultimate origin is obscure. The Teutonic word bears a singular resemblance in sound to its Latin synonym "vitula", "vidula", whence "viole", Pr. viula, and (by adoption from these languages) Italian, Spanish, Portuguese "viola": see "viol". The supposition that the early Romance "vidula" was adopted independently in more than one Teutonic language would account adequately for all the Teutonic forms; on the other hand, "*fiÞulôn-" may be an Old Teutonic word of native etymology, though no satisfactory Teutonic derivation has been found."] A native Germanic ancestor of "fiddle" may even be the ancestor of the early Romance form of "violin." [, "The Story of the English Language" (New York: Simon and Schuster, 1967), p. 109.] Historically, "fiddle" also referred to a predecessor of today's violin. Like the violin, it tended to have four strings, but came in a variety of shapes and sizes. Another family of instruments which contributed to the development of the modern fiddle are the s, which are held between the legs and played vertically, and have fretted fingerboards.

Common distinctions between violins and fiddles reflect the differences in the instruments used to play classical and folk music. However, it is not uncommon for classically trained violinists to play fiddle music, and today many fiddle players have some classical training. As might be expected from the differences between the classical and folk music cultures, more musicians with no formal training play fiddle music than play classical music.

In construction, fiddles and violins are essentially identical (with the Norwegian excepted as a special case).

Some (folk) fiddle traditions fit the instrument with a flatter bridge than classical violinists use. The difference between "round" and "flat" is not more than about a quarter or half a millimeter variation in the height of one or two strings, but is sufficient to reduce the range of right-arm motion required for the rapid string-crossings found in some styles, and those who use flatter bridges say it makes playing s and shuffles () easier. It can also make s possible, allowing one to play chords. In bluegrass and , for example, the top of the bridge is sometimes cut so that it is very slightly flattened; the Hardanger fiddle uses an even flatter bridge, and the bridge of the "kontra" or "bracsa" (a three-string viola used in Hungarian and n folk music) is flat enough that all three strings can easily be played simultaneously.

Most classical violinists prefer a more rounded curve to the top of the bridge, feeling that this allows them to articulate each note more easily and clearly. Many fiddle players use the same top curve as well; most fiddles are fitted with a standard classical bridge, regardless of the style of music played on the instrument. Since the bridge may be changed, it does not permanently define an instrument as fiddle or violin.

"Fiddle" is more likely to be used than "violin" if the instrument's strings are steel rather than gut or synthetic, as the sound of steel strings better suits some fiddling styles. Tuning steel strings is easier with fine tuners (small screw mechanisms attached or built into the ) so fiddlers may favor instruments with fine tuners on all four strings; it is very uncommon to see four fine tuners on full-size instruments played by classical musicians. Strings are subject to regular replacement, fine tuners may be added or removed, and tailpieces may be changed, so, like flattened bridges, they do not make an irreversible difference.

Various clichés describe the difference between fiddle and violin: "When you are buying it, it's a fiddle. When you are selling it, it's a violin." "What's the difference between a violin and a fiddle? About $10,0000". "The violin sings, the fiddle dances." "A fiddle is a violin with attitude." "No one cries when they spill beer on a fiddle." According to the performer , the difference lies "in how you fiddle around with it." The clichés concerning cost reflect folk/fiddle music's lack of concern about or need of high priced instruments.

In performance, solo fiddling is the norm, though twin fiddling is represented in some North American, Scandinavian, and Irish styles. Violins, on the other hand, are commonly grouped in sections. These contrasting traditions may be vestiges of historical performance settings: large concert halls in which violins were played required more instruments, before electronic amplification, than did more intimate dance halls and houses fiddles were played in. The difference was likely compounded by the different sounds expected of violin music and fiddle music. Historically, the majority of fiddle music was dance music, while violin music had either grown out of dance music or was something else entirely. Violin music came to value a smoothness which fiddling, with its dance-driven clear beat, did not always follow - in situations that required greater volume, a fiddler (as long as they kept the beat) could push their instrument harder than could a violinist. (Different fiddle traditions had different values, as detailed below; these explanations are meant to present the differences between fiddle music and violin music generally.)

Following the folk revivals of the second half of the 20th century, however, it has become common for less formal situations to find large groups of fiddlers playing together -- see for example the Swedish folk-musician clubs, and the world-wide [cite web | authorlink = http://www.thesession.org | url = http://www.thesession.org/sessions/index.php | title = The Session: Sessions | accessdaymonth = 28 August | accessyear = 2006] phenomenon of Irish sessions.

In the very late 20th century, a few artists have successfully attempted a reconstruction of the Scottish tradition of violin and "big fiddle," or cello. Notable recorded examples include Amelia Kaminski and Christine Hanson's [http://www.willockandsaxgallery.com/kaminski.htm Bonnie Lasses] and and ' [http://www.culburnie.com/albums/AlasdairFraser/fire_and_grace.htm Fire and Grace] .

Most fiddling styles that use the standard violin also use the standard violin bow, the same as classical players. However, there are a few styles which use other bows. One notable example is the folk music from Hungary and Transylvania used in the tradition. While the violinist uses a standard bow, both the () and bass are played with heavy and crude "folk bows", consisting of a stout stick, usually hand-hewn, with the hank of horsehair attached at the tip and tied around the frog. The player tensions the hair by squeezing it when playing.

Violin bows used by fiddlers are usually made from wood, but bows made from fiberglass and other materials are becoming more common.

Scottish fiddlers emulating 18th century playing styles sometimes use a replica of the type of bow used in that period, which is a few inches shorter, and weighs significantly more.fact|date=May 2007

To a greater extent than classical playing, fiddle playing is characterized by a huge variety of ethnic or traditions, each of which has its own distinctive sound, including, but not limited to: