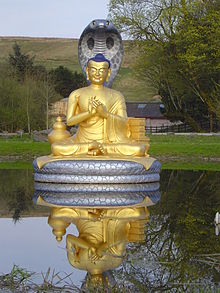 Nāgārjuna (Devanagari:नागार्जुन, Telugu: నాగార్జున, Tibetan: ཀླུ་སྒྲུབ་ klu sgrub, Chinese: 龍樹, Sinhala නාගර්පුන) (ca. 150–250 CE) was an important Buddhist teacher and philosopher. Along with his disciple Āryadeva, he is credited with founding the Mādhyamaka school of Mahāyāna Buddhism.[1] The Mādhyamaka school was in turn transmitted to China under the name of the Sānlùn School (Ch. 三論宗, "Three Treatise School"). In some Mahāyāna traditions, Nāgārjuna is regarded as a second buddha.[2]

Nāgārjuna is sometimes credited with developing the philosophy of the Prajñāpāramitā sūtras, and being associated with the Buddhist university of Nālandā. In the Jodo Shinshu branch of Buddhism, he is considered the First Patriarch.

According to most available accounts, Nāgārjuna was originally from Southern India.[3][4] Archaeological discoveries at Amarāvatī confirm the fact that Nāgārjuna maintained a friendship with the Sātavāhana king Gautamīputra Śātakarṇi, to whom he addressed his Letter to a Friend (Skt. Sahṛd-lekhā).[5] On this basis, Nāgārjuna is conventionally placed at around 150–250 CE.[6]

According to a biography translated by Kumārajīva, he was born into a Brahmin family, but later converted to Buddhism. This may be the reason he was one of the earliest significant Buddhist thinkers to write in classical Sanskrit rather than a prakrit.

From studying his writings, it is clear that Nāgārjuna was conversant with many of the Śrāvaka philosophies and with the Mahāyāna tradition. However, determining Nāgārjuna's affiliation with a specific Nikaya is difficult, considering much of this material is presently lost. If the most commonly accepted attribution of texts (that of Christian Lindtner) holds, then he was clearly a Māhayānist, but his philosophy holds assiduously to the Śrāvaka canon, and while he does make explicit references to Mahāyāna texts, he is always careful to stay within the parameters set out by the Śrāvaka canon.

Nagarjuna may have arrived at his positions from a desire to achieve a consistent exegesis of the Buddha's doctrine as recorded in the āgamas. In the eyes of Nagarjuna the Buddha was not merely a forerunner, but the very founder of the Madhyamaka system.[7] David Kalupahana sees Nagarjuna as a successor to Moggaliputta-Tissa in being a champion of the middle-way and a reviver of the original philosophical ideals of the Buddha.[8]

Nāgārjuna is said to have lived on the mountain of Śrīparvata in his later years, near the city that would later be called Nāgārjunakoṇḍa ("Hill of Nāgārjuna").[9] Nāgārjunakoṇḍa was located in what is now the Guntur district of Andhra Pradesh. The Caitika and Bahuśrutīya nikāyas are known to have had monasteries in Nāgārjunakoṇḍa.[10]

There exist a number of influential texts attributed to Nāgārjuna, although most were probably written by later authors. The only work that all scholars agree is Nagarjuna's is the Mūlamadhyamakakārikā (Fundamental Verses on the Middle Way), which contains the essentials of his thought in twenty-seven short chapters. According to Lindtner[11] the works definitely written by Nagarjuna are:-

There are other works attributed to Nāgārjuna, some of which may be genuine and some not. Some confusion may be caused by the fact that there were other Nāgārjunas, f.e. the Siddha Nāgārjuna, a holder of the Mahamudra-Lineage, who wrote probably several important works of esoteric Buddhism (most notably the Pañcakrama or "Five Stages"), as contemporary research suggests that these works are datable to a significantly later period in Buddhist history (late eighth or early ninth century), but the traditional sources maintain the theory that there was only one Nāgārjuna, who lived for almost 1000 years (as mentioned in Keith Dowmans "Masters of Mahamudra"). Traditional historians (for example, the 17th century Tibetan Tāranātha), aware of the chronological difficulties involved, account for the anachronism via a variety of theories, such as the propagation of later writings via mystical revelation. A useful summary of this tradition, its literature, and historiography may be found in Wedemeyer 2007.

Lindtner considers that the Māhaprajñāparamitopadeśa, a huge commentary on the Large Prajñāparamita not to be a genuine work of Nāgārjuna. This is only extant in a Chinese translation by Kumārajīva.There is much discussion as to whether this is a work of Nāgārjuna, or someone else. Étienne Lamotte, who translated one third of the Upadeśa into French, felt that it was the work of a North Indian bhikṣu of the Sarvāstivāda school, who later became a convert to the Mahayana. The Chinese scholar-monk Yin Shun felt that it was the work of a South Indian, and that Nāgārjuna was quite possibly the author. Actually, these two views are not necessarily in opposition, and a South Indian Nāgārjuna could well have studied in the northern Sarvāstivāda. Neither of the two felt that it was composed by Kumārajīva which others have suggested. 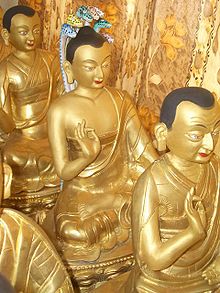 Statue of Nagarjuna in Tibetan monastery near Kullu, India

Nāgārjuna's primary contribution to Buddhist philosophy is in the use of the concept of śūnyatā, or "emptiness," which brings together other key Buddhist doctrines, particularly anātman (no-self) and pratītyasamutpāda (dependent origination), to refute the metaphysics of Sarvastivāda and Sautrāntika (extinct non-Mahayana schools). For Nāgārjuna, as for the Buddha in the early texts, it is not merely sentient beings that are "selfless" or non-substantial; all phenomena are without any svabhāva, literally "own-being" or "self-nature", and thus without any underlying essence. They are empty of being independently existent; thus the heterodox theories of svabhāva circulating at the time were refuted on the basis of the doctrines of early Buddhism. This is so because all things arise always dependently: not by their own power, but by depending on conditions leading to their coming into existence, as opposed to being. Nāgārjuna was also instrumental in the development of the two-truths doctrine, which claims that there are two levels of truth in Buddhist teaching, one which is directly (ultimately) true, and one which is only conventionally or instrumentally true, commonly called upaya in later Mahāyāna writings. Nāgārjuna drew on an early version of this doctrine found in the Kaccāyanagotta Sutta, which distinguishes nītārtha (clear) and neyārtha (obscure) terms -

"By and large, Kaccayana, this world is in bondage to attachments, clingings (sustenances), and biases. But one such as this does not get involved with or cling to these attachments, clingings, fixations of awareness, biases, or obsessions; nor is he resolved on 'my self.' He has no uncertainty or doubt that just stress, when arising, is arising; stress, when passing away, is passing away. In this, his knowledge is independent of others. It's to this extent, Kaccayana, that there is right view.

"'Everything exists': That is one extreme. 'Everything doesn't exist': That is a second extreme. Avoiding these two extremes, the Tathagata teaches the Dhamma via the middle..."[12]

Nāgārjuna differentiates between saṃvṛti (conventionally true) and paramārtha (ultimately true) teachings, but he never declares any conceptually formulated doctrines to fall in this latter category; for him, even śūnyatā is śūnyatā; even emptiness is empty. For him, ultimately,

The designable is ceased when the range of thought is ceased,
For phenomenality is like nirvana, unarisen and unstopped.

This was famously rendered in his tetralemma with the logical propositions:

Nagarjuna was also a practitioner of Ayurveda, or traditional Indian Ayurvedic medicine. First described in the Sanskrit medical treatise entitled Sushruta Samhita (of which he was the compiler of the redaction), many of his unique conceptualizations, such as his descriptions of the circulatory system and blood tissue (uniquely described as rakta dhātu) and his pioneering work on the therapeutic value of specially treated minerals knowns as bhasmas, which earned him the title of the "father of iatrochemistry.[14]

Nāgārjuna is often depicted in composite form comprising human and naga characteristics. Often the naga aspect forms a canopy crowning and shielding his human head. The notion of the naga is found throughout Indian religious culture, and typically signifies an intelligent serpent or dragon, who is responsible for the rains, lakes and other bodies of water. In Buddhism, it is a synonym for a realized arhat, or wise person in general. The term also means "elephant".