Buddhist cuisine is an East Asian cuisine which is followed by some believers of Buddhism. It is primarily vegetarian, in order to keep with the general Buddhist precept of ahimsa (non-violence). Parts of Ancient India were also Buddhist, and many Indians remain vegetarian.

Vegetarian cuisine is known as zhāicài ("(Buddhist) vegetarian food") in China, Hong Kong, Malaysia, Singapore and Taiwan; đồ chay in Vietnam; shōjin ryōri ("devotion cuisine") in Japan; sachal eumsik ("temple food") in Korea and by other names in many countries.

Both Mahayana and Theravada thinking is that eating meat in and of itself does not constitute a violation of the Five Precepts which prohibit one from directly harming life.

When monks and nuns who follow the Theravadan way feed themselves by alms, they must eat whatever leftover foods which are given to them, including meat. (The Pali/Sanskrit term for monks and nuns means "one who seeks alms".) The exception to this alms rule is when monks and nuns have seen, heard or known that animal(s) have been specifically killed to feed the alms-seeker, in which case consumption of such meat would be karmically negative. The same restriction is also followed by lay Buddhists and is known as the consumption of the "triply clean meat" (三净肉).

On the other hand, when lay communities specifically purchase meat for the consumption of monks and nuns, the permissibility of meat eating differ among Buddhist sects. The Theravada Pali Canon records instances of Buddha eating meat that was specifically purchased for him. This act was deliberately performed by the Buddha to demonstrate that, if need be, a Buddhist can bend the rules in times of emergency or inconvenience.[citation needed] Obstinately observing vegetarianism or Buddhist rules in times when you cannot conflicts with Mahayana philosophy because obstinacy or attachment for anything, is considered to be "stubbornness" (执著), which will become an obstacle to nirvana or enlightenment. However, if one undertakes a vow to be a Buddhist vegetarian, one is expected to follow this vow until it is humanly impossible to continue one's vegetarian diet.

Buddhism and other food considerations

East Asian "Buddhist" cuisine differ from Western vegetarian cuisine in one aspect, that is avoidance of killing plant life. Buddhist vinaya for monks and nuns prohibit harming of plants. Therefore, strictly speaking, root vegetables (such as potatoes, carrots or onion) are not to be used as this will result in death of vegetables.[citation needed][dubious – discuss] Instead, vegetables such as beans or fruits are used. However, this stricter version of diet is often practiced only on special occasions.[citation needed]

Some Mahayana Buddhists in China, Japan and Vietnam specifically avoid eating strong-smelling plants, traditionally garlic, Allium chinense, asafoetida, shallot, and mountain leek, and refer to these as wǔ hūn (五荤, or 'Five Acrid And Strong Smelling Vegetables') or wǔ xīn (五辛 or 'Five Spices') as they tend to excite senses. This is based on teachings found in the Brahamajala Sutra, the Surangama Sutra and the Lankavatara Sutra (chapter 8). In modern times this rule is often interpreted to include other vegetables of the onion genus, as well as coriander. This draws parallels with some sects of Hinduism, who also do not consume pungent tasting foods. 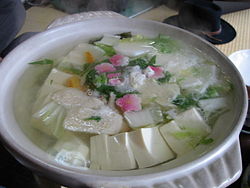 An example of shōjin-ryōri taken in Kyoto, Japan at the zen temple of Ryuanji.

The food that a strict Buddhist takes, even if he/she is not a vegetarian, is also specific. For many Chinese Buddhists, beef and the consumption of large animals and exotic species is avoided. Then there would be the aforementioned sanjingrou rule. One restriction on food that is not known to many is the abstinence from eating animal innards and organs. This is known as xiàshui (下水), and is not to be confused with the term for sewage.

Alcohol and other drugs are also avoided by many Buddhists because of their effects on the mind and "mindfulness". It is part of the Five Precepts which dictate that one is not to consume "addictive materials". The definition of "addictive" depends on each individual but most Buddhists consider alcohol, tobacco and contraband drugs to be addictive.

Buddhist vegetarian chefs have become extremely creative in imitating meat using prepared wheat gluten, also known as "seitan" or "wheat meat", soy (such as tofu or tempeh), agar, and other plant products. Some of their recipes are the oldest and most-refined meat analogues in the world. Soy and wheat gluten are very versatile materials, because they can be manufactured into various shapes and textures, and they absorb flavourings (including, but not limited to, meat-like flavourings), whilst having very little flavour of their own. With the proper seasonings, they can mimic various kinds of meat quite closely.

Some of these Buddhist vegetarian chefs are in the many monasteries which serve wu hun and mock-meat (also known as 'meat analogues') dishes to the monks and visitors (including non-Buddhists who often stay for a few hours or days, to Buddhists who are not monks, but staying overnight for anywhere up to weeks or months). Many Buddhist restaurants also serve vegetarian, vegan, non-alcoholic, and/or wu hun dishes. Some Buddhists eat vegetarian only once per week or month, or on special occasions such as annual visits to an ancestor's grave. To cater to this type of customer, as well as full-time vegetarians, the menu of a Buddhist vegetarian restaurant usually shows no difference from a typical Chinese or far-Eastern restaurant, except that in recipes originally made to contain meat, a chicken flavoured soy or wheat gluten might be served instead.