Mikhail Yuryevich Lermontov (Russian: Михаи́л Ю́рьевич Ле́рмонтов, IPA: [mʲɪxɐˈil ˈjurʲjɪvʲɪtɕ ˈlʲɛrməntəf]; October 15 [O.S. October 3] 1814 – July 27 [O.S. July 15] 1841), a Russian Romantic writer, poet and painter, sometimes called "the poet of the Caucasus", became the most important Russian poet after Alexander Pushkin's death in 1837. Lermontov is considered the supreme poet of Russian literature alongside Pushkin and the greatest figure in Russian Romanticism. His influence on later Russian literature is still felt in modern times, not only through his poetry, but also through his prose, which founded the tradition of the Russian psychological novel.

Lermontov was born in Moscow into a respectable noble family of the Tula Oblast, and grew up on the Tarkhany estate in in the village of Tarkhany (now Lermontovo) in Penza Oblast. According to one disputed and uncorroborated theory his paternal family was believed to have descended from the Scottish Learmonths, one of whom settled in Russia in the early 17th century, during the reign of Mikhail Fedorovich Romanov. The legendary Scottish poet Thomas the Rhymer (Thomas Learmonth) is claimed as a relative of Lermontov. However this claim has been neither proved nor disproved, and thus remains a legend.[1]

Lermontov's father, Yuri Lermontov, like his father before him, was a military man. Having moved up the ranks to captain, he married the sixteen-year-old Maria Arsenyeva, to the great dismay of her mother, Yelizaveta Alekseyevna. A year after the marriage, on the night of October 3 (Old Style), 1814, Maria gave birth to Mikhail Lermontov. According to tradition, soon after his birth some discord between Lermontov's father and grandmother erupted, and unable to bear it, Maria fell ill and died in 1817. After her daughter's death, Yelizaveta Alekseyevna devoted all her love to her grandson, constantly afraid that his father might move away with him. Either because of this pampering or continuing family tension or both,the young Lermontov developed a fearful and arrogant temper, which he took out on the servants, and in vandalising his grandmother's garden.

As a small boy Lermontov listened to stories about the outlaws of the Volga region, about their great bravery and wild country life. When he was ten, Mikhail fell sick, and Yelizaveta Alekseyevna took him to the Caucasus because of its better climate. That was the beginning of his love for this region.

Lermontov as a child

The intellectual atmosphere in which he grew up was similar to that experienced by Pushkin, though the domination of French had begun to give way to a preference for English, and Lamartine shared popularity with Byron. In his early childhood Lermontov was educated by a Frenchman named Gendrot. Yelizaveta Alekseyevna felt that this was not sufficient and decided to take Lermontov to Moscow, to prepare for gymnasium. In Moscow, Lermontov was introduced to Goethe and Schiller by a German pedagogue, Levy, and shortly afterwards, in 1828, he entered the gymnasium. He proved to be an exceptional student. Also at the gymnasium he became acquainted with the poetry of Pushkin and Zhukovsky, and one of his friends, Katerina Khvostovaya, later described him as "married to a hefty volume of Byron". Katerina had at one time been the object of Lermontov's affections and to her he dedicated some of his earliest poems, "Нищий (У врат обители святой)" (The Beggar). At that time, along with his poetic passion, Lermontov also developed an inclination for poisonous wit and cruel, sardonic humor. His ability to draw caricatures was matched by his ability to pin someone down with a well aimed epigram or nickname.

After the academic gymnasium, in August 1830 Lermontov entered Moscow University. That same summer the final, tragic act of the family discord played itself out. Deeply affected by his son's alienation, Yuri Lermontov left the Arseniev house for good, only to die a short time later. His father's death under such circumstances was a terrible loss for Mikhail and is reflected in his poems: "Forgive me, Will we Meet Again?" and "The Terrible Fate of Father and Son".

Lermontov's career at the university was short-lived. He attended lectures faithfully, but he would often read a book in the corner of the auditorium, and rarely took part in student life. A prank pulled by a group of students against one of the professors named Malov brought his time at the University to an end.[clarification needed] Several biographers cite this incident as the reason for Mikhail's departure.[citation needed]

The events at the university led Lermontov to seriously reconsider his career choice. From 1830 to 1834 he attended the cadet school in Saint Petersburg and in due course he became an officer in the guards. At that time he began writing poetry. He also took a keen interest in Russian history and medieval epics, which would be reflected in the Song of the Merchant Kalashnikov, his long poem Borodino, poems addressed to the city of Moscow, and a series of popular ballads. 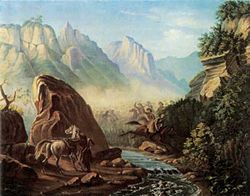 To express his own and the nation's anger at the loss of Pushkin (1837) the young soldier wrote a passionate poem, Death of the Poet, — the latter part of which is explicitly addressed to the inner circles at the court, though not to the Tsar himself. The poem all but accuses the powerful "pillars" of Russian high society of complicity in Pushkin's death. Without mincing words, it portrays that society as a cabal of self-interested venomous wretches "huddling about the throne in a greedy throng", "the hangmen who kill liberty, genius, and glory" about to suffer the apocalyptic judgment of God.

The tsar Nicholas I, however, seems to have found more impertinence than inspiration in the address, as Lermontov was forthwith banished to the Caucasus as an officer in the dragoons.[2] He had been in the Caucasus with his grandmother as a boy of ten, and he felt himself at home, with emotions deeper than those of childhood recollection. The stern and gritty virtues of the mountain tribesmen against whom he had to fight, no less than the scenery of the rocks and of the mountains themselves, were close to his heart; the tsar had exiled him to his spiritual homeland.

Lermontov visited Saint Petersburg in 1838 and 1839, and his indignant observations of the aristocratic milieu, where fashionable ladies welcomed him as a celebrity, occasioned his play Masquerade. His doomed love for Barbara Lopukhina was recorded in the novel Princess Ligovskaya, which he never finished. Lermontov's duel with a son of the French ambassador led to him being returned to the army fighting the war in the Caucasus, where he distinguished himself in hand-to-hand combat at the Battle of the Valerik River, the basis for his poem Valerik. 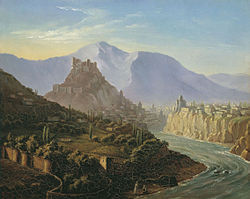 A landscape painted by Lermontov. Tiflis, 1837

By 1839 he completed his most important novel, A Hero of Our Time, which prophetically describes a duel like the one in which he would eventually lose his life.

On July 25, 1841, at Pyatigorsk, fellow army officer Nikolai Martynov, who felt offended by one of Lermontov's jokes, challenged him to a duel. The duel took place two days later at the foot of Mashuk mountain. Lermontov was killed by Martynov's first shot. Several of his verses were discovered posthumously in his notebook. He is buried at Tarkhany.

Lermontov's poetic development was unusual. His earliest unpublished poems that he circulated in manuscript through his friends in the military were pornographic in the extreme, with elements of sadism. His subsequent reputation was clouded by this, so much so that admission of familiarity with Lermontov's poetry was not permissible for any young upper-class woman for a good part of the 19th century. These poems were published only once, in 1936, as part of a scholarly edition of Lermontov's complete works (edited by Irakly Andronikov).

During his lifetime, Lermontov published only one slender collection of poems (1840). Three volumes, much mutilated by censorship, were published a year after his death. His short poems range from indignantly patriotic pieces like Fatherland to the pantheistic glorification of living nature (e.g., Alone I set out on the road ...) Some have termed Lermontov's early verse puerile, since, despite his dexterous command of the language, it usually appeals more to adolescents than to adults. Mikhail attempted to analyse and bring to light the deeper reasons for this metaphysical discontent with society and himself. His poem "Mtsyri" ("The Novice") tells the story of a young man who finds that dangerous freedom is vastly preferable to protected servitude. 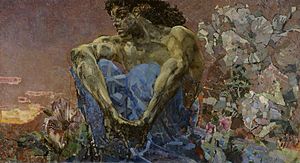 Both his patriotic and pantheistic poems had an enormous influence on later Russian literature. Boris Pasternak, for instance, dedicated his 1917 poetic collection of signal importance to the memory of Lermontov's Demon, a long poem, which Lermontov rewrote several times, featuring some of the most mellifluous lines in the language. The poem, which celebrates the carnal passions of the "eternal spirit of atheism" to a "maid of mountains", was banned from publication for decades. Anton Rubinstein's lush opera on the same subject was also banned by censors who deemed it sacrilegious and stupid.

Lermontov's major works, which many Russians can readily quote from memory, suffer from poor quality or scarcity of translations - Lermontov therefore, remains largely unknown to English-speaking readers, save for his novel A Hero of Our Time.

Lermontov's Cossack Lullaby "went the whole round: from the original folklore source to literature, and from literature to living folklore. ... For one and a half centuries people have performed these literary lullabies in real lulling situations [in Russia]." [3]

The town of Lermontov, Russia (granted municipal status in 1956), the cruise liner MS Mikhail Lermontov (launched in 1970) and the minor planet 2222 Lermontov (discovered in 1977)[4] were named after him.

The crew of Soyuz TMA-21 selected Tarkhany as their call sign, after the estate where Lermontov spent his childhood and where his remains are preserved.[5]