Mácha grew up in Prague, the son of a foreman at a mill. He learned Latin and German in school. He went on to study law at Prague University; during that time he also became involved in theatre (as an actor he first appeared in Jan Nepomuk Štěpánek's drama Czech and German in July 1832 in Benešov[1]), where he met Eleonora Šomková, with whom he had a son out of wedlock. He was fond of travel, enjoying trips into the mountains, and was an avid walker. Eventually he moved to Litoměřice, a quiet town some 60 km from Prague, to prepare for law school exams and to write poetry. Three days before he was to be married to Šomková, just a few weeks after he had begun working as a legal assistant, Mácha, in helping put out a fire, overstrained himself, and died after a short period of illness, due to pneumonia.[2] The day after his death he was expected in Prague to marry his mistress.

Mácha was buried in Litoměřice in a pauper's grave. Recognition came after his death: in 1939, his remains were exhumed, and they were given a formal state burial at the Vyšehrad cemetery in Prague. A statue was erected in his honor in Petřín Park, Prague.[2] In 1937 a biographical film, Karel Hynek Mácha, was made by Zet Molas (a pen name of Zdena Smolová). Máchovo jezero (English Mácha's Lake) was named after him in 1961. 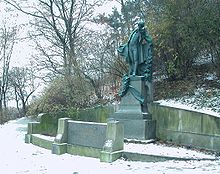 His lyrical epic poem Máj (May), published in 1836 shortly before his death, was judged by his contemporaries as confusing, too individualistic, and not in harmony with the national ideas.[2] Czech playwright Josef Kajetán Tyl even wrote a parody on Mácha's style, Rozervanec (The Chaotic). Máj was rejected by publishers, and was published by a vanity press at Mácha's own expense, not long before his early death.

Mácha's genius was discovered and glorified much later by the poets and novelists of the 1850s generation (for example Jan Neruda, Vítězslav Hálek, Karolina Světlá) and Máj is now regarded as the classic work of Czech Romanticism, and is considered one of the best Czech poems ever written.[citation needed] It contains forebodings of many of the tendencies of twentieth-century literature: existentialism, alienation, isolation, surrealism, etc.

He also authored a collection of autobiographical sketches titled Pictures From My Life, the 1835–36 novel Cikáni (Gypsies), as well as several individual poems, besides a journal in which, for instance, he detailed his sexual encounters with Somkova.[2]

Besides poetry and prose he wrote diaries and literary sketchbooks. The Diary of Travel to Italy describes his journey to Venice, Trieste and Ljubljana (where he met the Slovene national poet France Prešeren) in 1834. The Secret Diary describes his daily life in autumn 1835 with cipher passages concerning his relationship with Eleonora Šomková.[3]