James Fenimore Cooper (September 15, 1789 – September 14, 1851) was a prolific and popular American writer of the early 19th century. He is best remembered as a novelist who wrote numerous sea-stories and the historical novels known as the Leatherstocking Tales, featuring frontiersman Natty Bumppo. Among his most famous works is the Romantic novel The Last of the Mohicans, often regarded as his masterpiece.

James Fenimore Cooper was born in Burlington, New Jersey, the son of William and Elizabeth (Fenimore) Cooper. His father was a United States Congressman. Shortly after his first birthday, his family moved to Cooperstown, New York, a community founded by his father.

At 13, Cooper was enrolled at Yale, but he did not obtain a degree due to being expelled. His expulsion stemmed from a dangerous prank that involved him blowing up another student's door.[1] Another less dangerous prank consisted of training a donkey to sit in a professor's chair.[2] He obtained work as a sailor on a merchant vessel, and at 18, joined the United States Navy. He obtained the rank of midshipman before leaving in 1811.

At age 21, he married Susan DeLancey. They had seven children, five of whom lived to adulthood. The writer Paul Fenimore Cooper was a great-grandson.

He anonymously published his first book, Precaution (1820). He soon issued several others. In 1823, he published The Pioneers; this was the first of the Leatherstocking series, featuring Natty Bumppo, the resourceful American woodsman at home with the Delaware Indians and especially their chief Chingachgook. Cooper's most famous novel, Last of the Mohicans (1826), became one of the most widely read American novels of the 19th century. The book was written in New York City, where Cooper and his family lived from 1822 to 1826.

In 1826 Cooper moved his family to Europe, where he sought to gain more income from his books as well as provide better education for his children. While overseas, he continued to write. His books published in Paris include The Red Rover and The Water Witch—two of his many sea stories.

In 1832 he entered the lists as a political writer; in a series of letters to the National, a Parisian journal, he defended the United States against a string of charges brought against them by the Revue Britannique. For the rest of his life, he continued skirmishing in print, sometimes for the national interest, sometimes for that of the individual, and not infrequently for both at once.

This opportunity to make a political confession of faith reflected the political turn he already had taken in his fiction, having attacked European anti-republicanism in The Bravo (1831). Cooper continued this political course in The Heidenmauer (1832) and The Headsman: or the Abbaye of Vigneron (1833). The Bravo depicted Venice as a place where a ruthless oligarchy lurks behind the mask of the "serene republic". All were widely read on both sides of the Atlantic, though The Bravo was a critical failure in the United States.[3]

In 1833 Cooper returned to the United States and immediately published A Letter to My Countrymen, in which he gave his own version of the controversy and sharply censured his compatriots for their share in it. He followed up with novels and several sets of notes on his travels and experiences in Europe. His Homeward Bound and Home as Found are notable for containing a highly idealized self portrait.

In June 1834, Cooper decided to reopen his ancestral mansion, Otsego Hall, at Cooperstown. It had long been closed and falling into decay; he had been absent from the mansion nearly 16 years. Repairs were begun, and the house was speedily put in order. At first, he wintered in New York City and summered in Cooperstown, but eventually he made Otsego Hall his permanent home.[4] 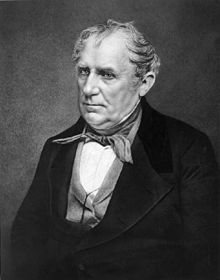 His books related to current politics and Cooper's self promotion increased the ill feeling between author and public. The Whig press was virulent in its comments about him, and Cooper filed legal actions for libel, winning all his lawsuits.

After concluding his last case in court, Cooper returned to writing with more energy and success than he had had for several years. He wrote a history of the US Navy, and returned to the Leatherstocking series with The Pathfinder, or The Inland Sea (1840) and The Deerslayer (1841) and other novels. He wrote again on maritime themes, including Ned Myers, or A Life Before the Mast, which is of particular interest to naval historians.

He turned again from pure fiction to the combination of art and controversy in which he had achieved distinction with the Littlepage Manuscripts (1845–1846). His next novel was The Crater, or Vulcan's Peak (1847), in which he attempted to introduce supernatural machinery. Jack Tier (1848) was a remaking of The Red Rover, and The Ways of the Hour was his last completed novel.

Cooper spent the last years of his life back in Cooperstown. He died of dropsy on September 14, 1851, the day before his 62nd birthday. His interment was in Christ Episcopal Churchyard, where his father, William Cooper, was buried. Several well-known writers, politicians, and other public figures honored Cooper's memory with a dinner in February 1852; Washington Irving served as a co-chairman for the event, alongside William Cullen Bryant and Daniel Webster.[5] 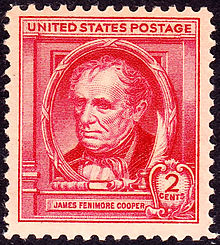 Cooper was honored on a U.S. commemorative stamp, issued in 1940

Cooper was one of the most popular 19th-century American authors, and his work was admired greatly throughout the world. While on his death bed, the Austrian composer Franz Schubert wanted most to read more of Cooper's novels.[6] Honoré de Balzac, the French novelist and playwright, admired him greatly[citation needed]. Cooper's stories have been translated into nearly all the languages of Europe and into some of those of Asia.

Cooper's work is read carefully by law and literature scholars such as Nan Goodman, who argues that several of Cooper's novels, particularly The Pioneers and The Pilot, demonstrate an early 19th century American preoccupation with prudence and negligence in a country where property rights were often still in dispute.[7] However, despite his close association with the period, he also innovated in several ways. Amongst these, Cooper was the first major American Novelist to include African and African American characters. Though these black characters often fell into stereotypical roles, he still used slaves, free Negroes and mulattoes throughout his books.[8] 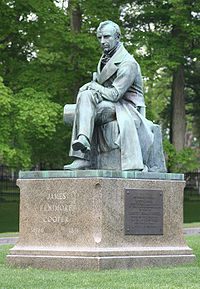 Though some scholars may dispute Cooper being classified as a Romantic, Victor Hugo pronounced him greater than the great master of modern romance[citation needed], and this verdict was echoed by a multitude of less famous readers[who?], who were satisfied with no title for their favorite less than that of the "American Scott.”[citation needed] The Deerslayer and The Pathfinder were criticized by Mark Twain in a satirical but vicious essay, "Fenimore Cooper's Literary Offenses" (1895),[9] which has often been criticized as unfair and distorted.[10] As scholars Schachterle and Ljungquist write, "Twain's deliberate misreading of Cooper has been devastating....Twain valued economy of style (a possible but not necessary criterion), but such concision simply was not a characteristic of many early nineteenth-century novelists' work. Writing with the expectation that their readers would often read their works aloud, Scott, Dickens, Thackeray, Cooper, and Melville favored a full, sometimes rotund, style that Twain and his fellow Realists a generation later spurned."[11]

His reputation today rests upon the five Leatherstocking tales and some of the maritime stories. Literary scholar Leslie Fiedler, however, noted that Cooper's "collected works are monumental in their cumulative dullness."[12]

Cooper was also criticized heavily for his depiction of women characters in his work. James Russell Lowell, Cooper's contemporary and a critic, referred to it poetically in A Fable for Critics, writing, ". . . the women he draws from one model don't vary / All sappy as maples and flat as a prairie."[13]

Three dining halls at the State University of New York at Oswego are named in Cooper's remembrance (Cooper Hall, The Pathfinder, and Littlepage) because of his temporary residence in Oswego and for setting some of his works there.[14] The gilded and red tole chandelier hanging in the library of the White House in Washington DC is from the home of James Fenimore Cooper. It was brought there through the efforts of First Lady Jacqueline Kennedy in her great White House restoration.[citation needed]