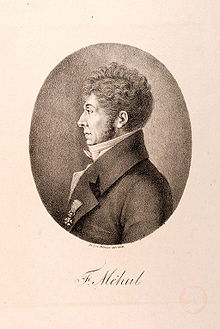 Méhul was born at Givet in Ardennes to Jean-François Méhul - a wine merchant - and his wife Marie-Cécile (née Keuly). His first music lessons came from a blind local organist, but he had innate aptitude and was sent to study with a German musician and organist, Wilhelm Hanser, at the monastery of Lavaldieu, a few miles from Givet. Here Méhul developed his lifelong love of flowers.[3]

In 1778 or 1779 he went to Paris and began to study with Jean-Frédéric Edelmann, a harpsichord player and friend of Méhul's idol Christoph Willibald von Gluck. Méhul's first published composition was a book of piano pieces in 1783. He also arranged airs from popular operas and by the late 1780s he had begun to think about an operatic career for himself.

In 1787, the writer Valadier offered Méhul one of his libretti, Cora, which had been rejected by Gluck in 1785.[4] The Académie royale de musique (the Paris Opéra put Méhul's work, under the title Alonzo et Cora, into rehearsal in June 1789. However, the rehearsals were abandoned on 8 August, probably because the Opéra had been suffering severe financial difficulties throughout the 1780s, and the opera was not premiered until 1791.[5] In the meantime, Méhul found an ideal collaborator in the librettist François-Benoît Hoffman, who provided the words to the first of Méhul's operas to be performed, Euphrosine. Its premiere in 1790 was an immense success and marked the composer out as a new talent. It was also the start of his long relationship with the Comédie Italienne theatre (soon to be renamed the Opéra-Comique). 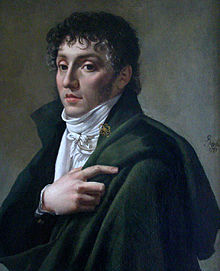 Méhul in 1799, portrait by Antoine Gros.

In spite of the failure of Cora in 1791 and the banning of Adrien for political reasons the year after that, Méhul consolidated his reputation with works such as Stratonice and Mélidore et Phrosine. During the French Revolution, Méhul composed many patriotic songs and propaganda pieces, the most famous of which is the Chant du départ. Méhul was rewarded by becoming the first composer named to the newly founded Institut de France in 1795. He also held a post as one of the five inspectors of the Conservatoire de Paris. Mehul was on friendly terms with Napoleon and became one of the first Frenchmen to receive the Légion d'honneur.

Méhul's operatic success was not as great in the first decade of the nineteenth century as it had been in the 1790s, although works such as Joseph (1807) became famous abroad, particularly in Germany. The failure of his opera Les amazones in 1811 was a severe blow and virtually ended his career as a composer for the theatre. In spite of his friendship with Napoleon, Méhul's public standing survived the transition to the Bourbon Restoration intact. However, the composer was now seriously ill with tuberculosis and he died on October 18, 1817.[6]His grave is at the cemetery of Père Lachaise, near the grave of the Belgian composer, his contemporary François-Joseph Gossec.

In 1797 Méhul adopted his seven year old nephew, composer Joseph Daussoigne-Méhul, and his younger brother. He played a major role in his nephew's musical education and career; counting him among his pupils at the Paris Conservatoire. After his death, Daussoigne-Méhul notably completed his unfinished opera Valentine de Milan which premiered at the Opéra-Comique in 1822. He also wrote new recitatives for his opera Stratonice in 1821 for a revival of that work in Paris.[7]

Méhul's most important contribution to music was his operas. He led the generation of composers who emerged in France in the 1790s, which included his friend and rival Luigi Cherubini and his outright enemy Jean-François Lesueur. Méhul followed the example of the operas which Gluck had written for Paris in the 1770s and applied Gluck's "reforms" to opéra comique (a genre which mixed music with spoken dialogue and was not necessarily at all "comic" in mood). But he pushed music in a more Romantic direction, showing an increased use of dissonance and an interest in psychological states such as anger and jealousy, thus foreshadowing later Romantic composers such as Weber and Berlioz. Indeed, Méhul was the very first composer to be styled a Romantic; a critic used the term when reviewing Méhul's Le jeune sage et le vieux fou in La chronique de Paris on April 1, 1793.[8]

Méhul's main musical concern was that everything should serve to increase the dramatic impact. As his admirer Berlioz wrote:

[Méhul] was fully convinced that in truly dramatic music, when the importance of the situation deserves the sacrifice, the composer should not hesitate as between a pretty musical effect that is foreign to the scenic or dramatic character, and a series of accents that are true but do not yield any surface pleasure. He was convinced that musical expressiveness is a lovely flower, delicate and rare, of exquisite fragrance, which does not bloom without culture, and which a breath can wither; that it does not dwell in melody alone, but that everything concurs either to create or destroy it - melody, harmony, modulation, rhythm, instrumentation, the choice of deep or high registers for the voices or instruments, a quick or slow tempo, and the several degrees of volume in the sound emitted.[9]

One way in which Méhul increased dramatic expressivity was to experiment with orchestration. For example, in Uthal, an opera set in the Highlands of Scotland, he eliminated violins from the orchestra, replacing them with the darker sounds of violas in order to add local colour.[10] Méhul's La chasse du jeune Henri (Young Henri's Hunt) provides a more humorous example, with its expanded horn section portraying yelping hounds as well as giving hunting calls. (Sir Thomas Beecham frequently programmed this piece to showcase the Royal Philharmonic horn section.)

Méhul's key works of the 1790s were Euphrosine, Stratonice, Mélidore et Phrosine and Ariodant.[11] Ariodant, though a failure at its premiere in 1799, has come in for particular praise from critics. Elizabeth Bartlet calls it "Mehul's best work of the decade and a highpoint of Revolutionary opera".[12] It deals with the same tale of passion and jealousy as Handel's 1735 opera Ariodante. As in many of his other operas, Mehul makes use of a structural device called the "reminiscence motif", a musical theme associated with a particular character or idea in the opera. This device looks forward to the leitmotifs in Richard Wagner's music dramas. In Ariodant, the reminiscence motif is the cri de fureur ("cry of fury"), expressing the emotion of jealousy.[12]

Around 1800, the popularity of such stormy dramas began to wane, replaced by a fashion for the lighter opéra comiques of composers such as Boieldieu. In addition, Mehul's friend Napoleon told him he preferred a more comic style of opera. As a Corsican, Napoleon's cultural background was Italian, and he loved the opera buffa of composers like Paisiello and Cimarosa. Méhul responded with L'irato ("The Angry Man"), a one-act comedy premiered as the work of the Italian composer "Fiorelli" in 1801. When it became an immediate success, Méhul revealed the hoax he had played.[13] Méhul also continued to compose works in a more serious vein. Joseph, based on the Biblical story of Joseph and his brothers, is the most famous of these later operas, but its success in France was short-lived. In Germany, however, it won many admirers throughout the nineteenth century, including Wagner.[14] A melody from Joseph is very similar to a popular folk melody widely known in Germany which was used as a song in the German Imperial Navy, and adapted, notoriously, as the tune for the co-national anthem of Nazi Germany, the Horst-Wessel-Lied. It is unclear, however, whether Méhul's melody was the actual provenance of the melody.[15]

Symphonies and other works

Besides operas, Méhul composed a number of songs for the festivals of the republic (often commissioned by the emperor Napoleon), cantatas, and five symphonies in the years 1797 and 1808 to 1810.The First Symphony was revived in one of Felix Mendelssohn's concerts with the Leipzig Gewandhaus Orchestra in 1838 and 1846 to an audience including Robert Schumann, who was impressed by the piece. In all four movements there are some stylistic similarities with Beethoven's Symphony No.5 (including the dissonant, furious mood of the first movement and the string pizzicatos in the third), which were also noted by Schumann. Actually at this date only Beethoven's Symphonies No.1 and 2 (1799/1800 and 1802) had been performed in France and both Beethoven's Fifth and Mehul's First were composed in the same year, 1808, were published in the following, 1809. In his mature symphonies, Mehul continued the path Haydn (the Paris Symphonies, 1785-86, for example), Mozart (Symphony No. 40, K.550, 1788) had taken, two composers who enjoyed great popularity in France in the early 19th century. A fifth symphony was never completed—"as disillusionment and tuberculosis took their toll", as David Charlton pointed out. The Symphonies nos.3 and 4 were only rediscovered by Charlton in 1979. Interviewed 8 November 2010 on the on BBC Radio 4's Today programme, Professor Charlton said that Méhul's 4th Symphony was the first ever to employ the cyclical principle.