Opéra-Comique
This article is about the Parisian opera company. For the London opera house associated with Gilbert and Sullivan operettas, see Opera Comique. For the opera genre, see Opéra comique. 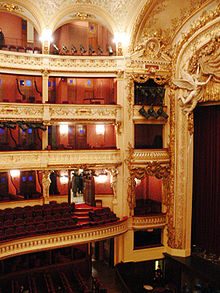 Interior of the present-day Opéra-Comique

The Opéra-Comique is a Parisian opera company, which was founded around 1714 by some of the popular theatres of the Parisian fairs. In 1762 the company was merged with, and for a time took the name of its chief rival the Comédie-Italienne at the Hôtel de Bourgogne, and was also called the Théâtre-Italien up to about 1793, when it again became most commonly known as the Opéra-Comique. Today the company's official name is Théâtre national de l'Opéra-Comique, and its theatre, with a capacity of around 1,248 seats, sometimes referred to as the Salle Favart (the third on this site), is located in Place Boïeldieu, in the 2nd arrondissement of Paris, not far from the Palais Garnier, one of the theatres of the Paris Opéra. The musicians and others associated with the Opéra-Comique have made important contributions to operatic history and tradition in France, and to French opera. Its current mission is to reconnect with its history, and discover its unique repertoire, to ensure production and dissemination of operas for the wider public.[1] Mainstays of the repertory at the Opéra-Comique during its history have included the following works which have each been performed more than 1,000 times by the company: Cavalleria Rusticana, Le chalet, La dame blanche, Le domino noir, La fille du régiment, Lakmé, Manon, Mignon, Les noces de Jeannette, Le pré aux clercs, Tosca, La bohème, Werther and Carmen, the last having been performed more than 2,500 times.[2] 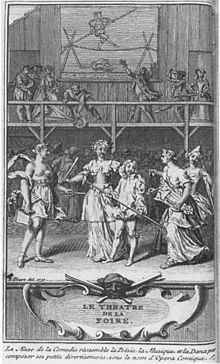 Since the Middle Ages popular light theatrical entertainments had been a part of the seasonal Parisian fairs, especially the Foire Saint-Germain and the Foire Saint-Laurent. They included farces, tightrope acts, acrobatics, and marionettes, and also included music, such as vaudevilles and popular songs. The audiences were diverse, from all levels of society, and the presentations were given on makeshift stages. However, with the establishment in 1672 of King Louis XIV's Académie royale de Musique (popularly known as the Opéra) under Jean-Baptiste Lully, the use of music by fair troupes was significantly curtailed.[3][4]

When the Italian players at the Hôtel de Bourgogne were banished from Paris in 1697 for performing their comedy La fausse prude ("The False Prude"), which satirized the King's mistress, Madame de Maintenon, the fair theatres were quick to adopt much of the Italians' repertory, which included parodies of operas and tragedies. The fair theatres were soon viewed as competition by the Opéra and the Comédie-Française, and restrictions were again more strictly enforced. The troupes at the Foire Saint-Germain and the Foire Saint-Laurent received warnings from the police in 1699 and 1706. Although in 1708 the fairground entrepreneurs Charles Alard and Maurice were able to purchase from the Opéra's director Pierre Guyenet the right to use singers, dancers, musicians, and sets, this did not last as Guyenet died in 1712, leaving the Opéra with a debt in the neighborhood of 400,000 livres. Alard resorted to giving silent performances with the actors' speeches displayed to the audience on large cue cards. The players next tried including vaudeville airs via audience participation: the musicians would play a popular tune, and the spectators would sing, while the actors remained silent. This was further enhanced when the words began to be displayed to the audience on a large banner.[3][4][5][6] 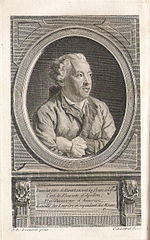 In 1713 and 1714 several of the fair troupes were able to conclude a new series of agreements with the creditors of the deceased Guyenet, who at this point had become the managers of the rather expensive Opéra. For an annual fee the troupes obtained the right to perform light comedies interspersed with songs and dances and to use sets and theatre machines.[5] They were also given the right to use the name "Opéra-Comique". The first work officially given that designation was Télémaque (a parody of the opera by André Cardinal Destouches), which was first performed by the Théâtre de la Foire Saint-Germain in 1715. The words were by Alain-René Lesage, the music was arranged by Jean-Claude Gillier, and the orchestra consisted of 15 players. Lesage authored many of the early opéras comiques, and composers like Gillier worked primarily as arrangers of existing music.[3][7] In 1716 one of the troupes' leaders, Catherine Vanderberg purchased additional rights and began to present more original works by authors, such as Jacques-Philippe d'Orneval, Alexis Piron, and Louis Fuzelier.[4] In these early days the role of librettist for the theatre was more important than that of the composer – and pre-eminent among them for more than forty years was Charles-Simon Favart, who made his first contribution in 1734 and achieved his first important success with La chercheuse d'esprit in 1741.[8]

In 1743 the impresario Jean Monnet paid 12,000 livres to the Opéra for the right to run the Opéra-Comique, He renovated the theatre and brought together a group of highly talented creative artists, including, besides Favart, who also worked as a stage director, the comedian "Préville" (real name Pierre-Louis Dubos), the stage designer François Boucher, and the ballet master Dupré and his pupil Jean-Georges Noverre. Jean-Philippe Rameau may also have been the leader of the orchestra. The company was, however, too successful, and the Opéra refused to renew Monnet's privilege in 1745. After working briefly in Lyon, and mounting unsuccessful productions in Dijon (1746) and London (1749), he was able to repurchase the Opéra-Comique privilège in December 1751 and remained its director until 1757.[9] 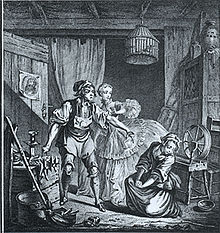 During his second period as director, Monnet continued to work with Favart and Noverre, and Boucher designed and built a substantial new theatre for the company of the Foire Saint-Laurent in 1752. The new theatre was not located on the fairground, however, but was on the rue Bergère, and later became the Salle des Menus-Plaisirs, used by the Opéra in 1781,[10], and then the first concert hall of the Paris Conservatory, which was founded on the same site in 1795.[11] The new theatre was especially important, as it enabled the company to perform at times when the fair was not in operation. Monnet's friend Jean Joseph Vadé wrote the libretto for Les troqueurs, first staged in July 1753 and advertised as a translation of an Italian work. The music was actually original, composed by Antoine Dauvergne, and began a period of new works in a more Italian style in which music played a much more significant role. Composers for the company during this period included Egidio Duni, François-André Danican Philidor and Pierre-Alexandre Monsigny.[8][9]

The dramatist Michel-Jean Sedaine wrote the text of his first opera for the company, Le diable à quatre, in 1756. It premiered at the Fair Saint-Laurent on 19 August with verses for the ariettes provided by Pierre Baurans and with music parodying a variety of composers including Vincenzo Ciampi, Duni, Baldassare Galuppi, and Giuseppe Scarlatti, and also included music attributed to the French composers Jean-Louis Laurette and Philidor. Christoph Willibald Gluck was later to compose his own music for the work. His version was first given in Laxenburg, Austria, on 28 May 1759. Other settings were later composed for the Opéra-Comique by Bernardo Porta (14 February 1790)[12] and Jean-Pierre Solié (30 November 1809).[13]

On 3 February 1762 the Opéra-Comique was merged into the Comédie-Italienne and occupied the Hôtel de Bourgogne,[14] gaining in respectability what it lost in independence. The company was renamed to Opéra-Comique by an edict of the king in 1780, although the names Comédie-Italienne and Théâtre Italien were still used frequently by the press and public for many years thereafter. In 1783 the company moved again, into the Salle Favart (architect Jean-François Heurtier; ca. 1,100 seats) on the site where the current theatre stands. Around that time the works of Grétry featured strongly.[8][15]

With the proliferation of opera houses after the Law of 1791 which removed restrictions on the opening of theatres, there was competition with the Théâtre Feydeau, which was resolved in 1801 by merger. By 1807 Napoleon had reduced theatrical freedoms, and the Opéra-Comique was named one of four primary theatres in Paris. 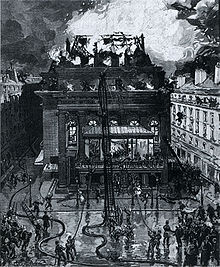 French opéra comique, in the 19th century at least, was not necessarily comic; the term covered a much wider category of work. Notable composers in the history of the Opéra-Comique include Auber, Halévy, Berlioz and Bizet.

In 1840, the Opéra-Comique company settled in the second Salle Favart (architect Louis Charpentier; 1,500 seats), built on the site of the first theatre, destroyed by fire in 1838. The new house was inaugurated with a revival of Hérold's Le Pré aux clercs. During the 1850s and 1860s the Théâtre Lyrique offered competition in the type of repertoire staged, being particularly strong in its policy of new commissions.

Performances took place on most evenings of the week except for major festivals. Boxes could be hired for a year at a time, and many subscribers were wealthy. Before 1848 a third of subscribers were of the aristocracy, but after then it became an especially middle class theatre. After 1848 Émile Perrin sought to revive the repertoire with more literary and ambitious works. Until 1864 its repertoire was still prescribed, by statute, to have spoken dialogue between musical numbers.[16]

The Opéra-Comique staged the first performances of such important French works as Berlioz's The Damnation of Faust (1846), Thomas' Mignon (1866), and Bizet's Carmen (1875). In the latter part of the century the theatre revived works it had made its own, restaged works from the repertoire of the Théâtre Lyrique (which had closed in 1872) and premiered new pieces, such as Offenbach's Les Contes d'Hoffmann (1881); Delibes' Lakmé (1883); Massenet's Manon (1884), Esclarmonde (1889), and Werther (French premiere in 1893); and Charpentier's Louise (1900).

A fire at the Salle Favart on 25 May 1887 resulted in the death of 84 people by asphyxiation. The building was destroyed and the director Léon Carvalho was forced to resign, although later he was acquitted of blame and resumed the helm at the company from 1891 to 1897. The third Salle Favart (architect Louis Bernier) was officially opened in the presence of President Félix Faure on 7 December 1898.

As the differences between opéra and opéra comique faded, the two main houses in Paris came more into competition, although the Salle Favart saw the premieres of more innovative works: Debussy's Pelléas et Mélisande (1902), Dukas' Ariane et Barbe-bleue (1907), Ravel's L'heure espagnole (1911), and French premieres of works by Puccini and Falla. Between 1900 and 1950, 401 works by 206 different composers were performed at the Opéra-Comique, of which 222 were either world premieres (136) or the first performance in Paris (86).[2]

In June 1936 a broadcast of Les Contes d'Hoffmann was disrupted by the start of a company sit-in demanding the director's resignation.[17] In 1939 financial problems resulted in the Opéra-Comique being merged with the Opéra to become the 'Réunion des Théatres Lyriques Nationaux'.[18] Notable premieres during this period included Poulenc's Les Mamelles de Tiresias (1947) and La Voix humaine (1959). In 1972 the Opéra-Comique company was closed (although the theatre itself received visiting productions) and its government grant added to that of the Opéra.

The company regained its autonomy and returned to the Salle Favart in 1990. It currently mounts 7 or 8 operas or opéra comiques (some of them co-productions), with complementary concerts, recitals and exhibitions, each season. In common with many other opera houses the Opéra-Comique also offers relayed performances to cinemas (around France and in Europe); Carmen in June 2009 and Béatrice et Bénédict in March 2010.

Theatres used by the Opéra-Comique company