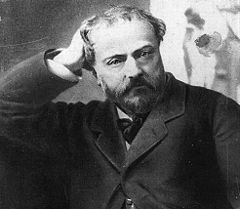 Emmanuel Chabrier (pronounced: [ɛmanɥɛl ʃabʁie]) (January 18, 1841 – September 13, 1894) was a French Romantic composer and pianist. Although known primarily for two of his orchestral works, España and Joyeuse marche, he left an important corpus of operas (including the increasingly popular L'étoile), songs, and piano music as well. These works, though small in number, are of very high quality, and he was admired by composers as diverse as Debussy, Ravel, Richard Strauss, Satie, Schmitt, Stravinsky, and the group of composers known as Les six. Stravinsky alluded to España in his ballet Petrushka, Ravel wrote that the opening bars of Le roi malgré lui changed the course of harmony in France, Poulenc wrote a biography of the composer, and Richard Strauss conducted the first staged performance of Chabrier's incomplete opera Briséïs.

Chabrier was also associated with some of the leading writers and painters of his time. He was especially friendly with the painters Claude Monet and Édouard Manet, and collected Impressionist paintings before Impressionism became fashionable. A number of such paintings from his personal collection are now housed in some of the world's leading art museums.

Alexis-Emmanuel Chabrier was born in Ambert (Puy-de-Dôme), a town in the Auvergne region of central France. His father was an attorney; his childhood nanny Anne Delayre (whom Chabrier called 'Nanine') remained close to him throughout her life. He began his music lessons at the age of six; the earliest of his compositions to survive in manuscript are piano works from 1849.

His family moved to Clermont-Ferrand in 1852 where he prepared for a legal career, studied at the Lycée imperial and had practical and theoretical music lessons with Alexander Tarnowski, a Polish-born composer and violinist. A piano piece from this period, Le Scalp!!!, was later modified into the Marche des Cipayes.

In 1856 the family made Paris their home, and the young Chabrier continued serious studies in both of his chosen fields. Chabrier spent a year at the Lycée Saint-Louis, passed the Baccalauréat, and entered law school from which he graduated in 1861, and on 29 October that year began a career at the French Ministry of the Interior. Despite this, his passion was music; during the 1860s he composed a number of minor piano works. His interest in Wagner began at this time, and he copied out the orchestral score of Tannhäuser.

From 1862 he entered the circle of the Parnassians in Paris, some of whom collaborated with him in his work. His interest in poetry lead to a long friendship with Paul Verlaine, who contributed librettos to two early operettas that he did not complete.

There are several descriptions of Chabrier's piano-playing from around this time; many years later d'Indy wrote "Though his arms were too short, his fingers too thick and his whole manner somewhat clumsy, he managed to achieve a degree of finesse and a command of expression that very few pianists - with the exception of Liszt and Rubinstein - have surpassed".[1] The wife of Renoir, a friend of Chabrier, wrote "one day Chabrier came; and he played his España for me. It sounded as if a hurricane had been let loose. He pounded and pounded the keyboard. The street was full of people, and they were listening, fascinated. When Chabrier reached the last crashing chords, I swore to myself I would never touch the piano again... Besides, Chabrier had broken several strings and put the piano out of action."[2] Alfred Bruneau recalled that "he played the piano as no one has ever played it before, or ever will..."[3]

His parents died within a few months of each other in 1869. During the Franco-Prussian War (1870–1871) and Commune, Chabrier continued with his desk job as the ministry moved from Tours to Bordeaux to Versailles. In 1873, he married Marie Alice Dejean, with whom he had three sons, one of whom died in early childhood.

He began several stage works during the 1870s. His first one to be completed was L'étoile, which achieved 48 successful performances at the Théâtre des Bouffes Parisiens in 1877, showcasing his light touch, musical aplomb, and comic wit. 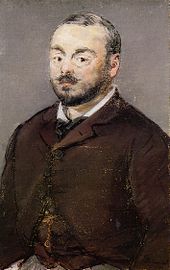 Chabrier's friends from the artistic avant-garde in Paris included Gabriel Fauré, Ernest Chausson, and Vincent d'Indy, as well as painters Henri Fantin-Latour, Edgar Degas and Édouard Manet, whose 'Thursday' soirées Chabrier attended,[4] and writers such as Émile Zola, Alphonse Daudet, Jean Moréas, Jean Richepin, Auguste Villiers de l'Isle-Adam and Stéphane Mallarmé.[5] On a trip to Munich with Henri Duparc in 1879, he discovered Wagner's masterpiece Tristan und Isolde. This event led him to realize his true passion for composition, and he quit the Ministry of the Interior in 1880. That year he composed his piano cycle Pièces pittoresques, of which the Idylle greatly influenced Francis Poulenc.[6]

Chabrier plunged himself into the scores of Wagner, and became an important assistant to Charles Lamoureux in preparing concert performances of the German master's works in Paris. He travelled to London (1882) and Brussels (1883) to hear Wagner's Ring cycle. However, the strength of Chabrier's musical personality and his essential 'Frenchness' of temperament and sensibility made it impossible for him to do more than experiment with Wagner's more superficial technical procedures, without getting involved in the aesthetic and philosophical theories.[7]

In 1882 Chabrier visited Spain, which resulted in his most famous work, España (1883), a mixture of popular airs he had heard and his own imagination. In the view of his friend Duparc, this composition for orchestra demonstrated an individual style that seemed to come from nowhere; other contemporary musicians were more condescending.[8]

His opera Gwendoline, set in England during the Anglo-Saxon period, was refused by the Paris Opera but was a success at its premiere at La Monnaie in Brussels under Henry Verdhurdt in 1885. However, it closed after just two performances because the impresario went bankrupt. Despite this major disappointment, he soon found a new lyric project to tackle - Le roi malgré lui (The King in Spite of Himself) - and completed the score in six months. But bad luck intervened again when, having been well-received, its run at the Opéra-Comique in Paris ended when the theatre burned after the third performance.[7] D'Indy felt Chabrier lavished some of his most beautiful music on Le roi malgré lui but condemned the libretto, complaining "people continually come in when they ought to go out and vice versa". Fortunately (through Chabrier's friendship with the Belgian tenor Ernest van Dyck and subsequently the conductor Felix Mottl), theater directors in Leipzig and Munich expressed interest in both works and Chabrier made several happy trips to Germany as a result.

In his final years, Chabrier was strained by financial problems caused by the collapse of his bankers, suffered from failing health brought on by the terminal stage of syphilis, and depression about the neglect of his stage works in France. The death of his beloved 'Nanine' in January 1891 greatly affected him. He became obsessed with the composition of his opera Briséïs, which was inspired by a tragedy of Goethe and melodic echos of Wagner, but he completed only one act. At the Paris premiere of Gwendoline, which finally took place in December 1893, the ailing composer in a box did not understand that the applause was for him. In 1892 he had written to his friend Lecocq: "Never has an artist more loved, more tried to honour music than me, none has suffered more from it; and I will go on suffering from it for ever".[9]

He succumbed to general paralysis in the last year of his life, dying in Paris at the age of 53. Although he had asked to be buried near the tomb of Manet, he was laid to rest in the cemetery of Montparnasse.

Chabrier is remembered for his dazzling harmonic colors and his command of orchestral composition. The piano pieces he wrote show much originality and beauty. His many surviving letters give a vivid impression of his character, his ideas and his life.[10]

The conservatoire of music, dance and drama in Clermont Ferrand is named after Chabrier.[11]

Of particular interest in discussing Chabrier is his contacts with contemporary artists, particularly painters of the Impressionism school. He was also a subject for several leading artists.

Chabrier left a rich collection of paintings by contemporary French painters. A sale of his collection at the Hôtel Drouot on 26 March 1896 included[12]:

Chabrier himself features in L'orchestre by Edgar Degas (C in the stage box), Autour du piano by Henri Fantin-Latour (C at the piano), and two portraits by Manet: