Giacomo Meyerbeer[1] (5 September 1791 – 2 May 1864) was a noted German opera composer, and the first great exponent of "grand opera." At his peak in the 1830s and 1840s, he was the most famous and successful composer of opera in Europe, yet he is rarely performed today.

He was born to a Jewish family in Tasdorf (now a part of Rüdersdorf), near Berlin with the name Jacob Liebmann Beer. His father was the enormously wealthy financier Jacob Judah Herz Beer (1769-1825) and his much-beloved mother, Amalia Liebmann Meyer Wulff (1767-1854) also came from the wealthy elite. Their other children included the astronomer Wilhelm Beer and the poet Michael Beer. 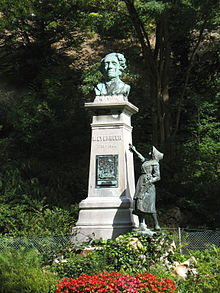 Statue of Meyerbeer in the Belgian town of Spa, where he stayed many times

Beer's first keyboard instructor was Franz Lauska, a pupil of Johann Georg Albrechtsberger and a favoured teacher at the Berlin court.[2] Beer also became one of Muzio Clementi's pupils while Clementi was in Berlin, and old Clementi himself, although he had long given up teaching, was so much struck, during a visit to Berlin, with the promise displayed in the boy's performance as to consent to give Beer lessons. Beer made his public debut in 1801 playing Mozart's D minor Piano Concerto in Berlin. The Allgemeine musikalische Zeitung reported: 'The amazing keyboard playing of young Bär (a Jewish lad of 9), who carried off the difficult passages and other solo parts with aplomb, and has fine powers of rendition even more rarely found in one of his age, made the concert even more interesting'.[3]

Throughout his youth, although he was determined to become a musician, Beer found it difficult to decide between playing and composition. Certainly other professionals in the decade 1810-1820, including Moscheles, considered him amongst the greatest virtuosi of his period.

Study in Italy and change of name

Beer, as he still was, studied with Antonio Salieri and the German master and friend of Goethe, Carl Friedrich Zelter. Realizing that a full understanding of Italian opera was essential for his musical development, however, he went to study in Italy for some years, during which time he adopted the first name "Giacomo." The "Meyer" in his surname he adopted after the death of his great-grandfather. It was during these years in Italy that he became acquainted with, and impressed by, the works of his contemporary Gioachino Rossini. 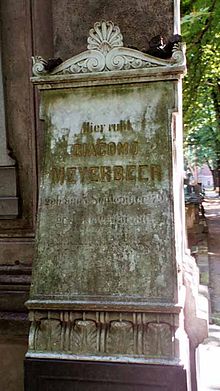 The name Giacomo Meyerbeer first became known internationally with his opera Il crociato in Egitto — premiered in Venice in 1824 and produced in London and Paris in 1825; incidentally the last opera ever to feature a castrato. But Meyerbeer became virtually a superstar with Robert le diable (with libretto by Eugène Scribe and Casimir Delavigne), produced in Paris in 1831 and regarded by some as the first grand opera, although this honour rightly belongs to Auber's La muette de Portici.

The fusion of dramatic music, melodramatic plot, and sumptuous staging proved a sure-fire formula, which Meyerbeer would go on to repeat in Les Huguenots (1836), Le prophète (1849), and L'Africaine, (produced posthumously, 1865). All of these operas held the international stage throughout the 19th century, as did the more pastoral Dinorah (1859).

Meyerbeer, who had settled in Paris, left for Berlin in 1842 to take the post of court music director, but he returned to Paris in 1849.

Meyerbeer's immense wealth (increased by the success of his operas) and his continuing adherence to his Jewish religion set him apart somewhat from many of his musical contemporaries. They also gave rise to malicious rumours that his success was due to his bribing musical critics. Richard Wagner (see below) accused him of being interested only in money, not music.

Meyerbeer was, however, a deeply serious musician and a sensitive personality. He philosophically resigned himself to being a victim of his own success: his extensive diaries and correspondence — which survived the turmoil of 20th century Europe and are now being published; 6 volumes so far out of 7 — are an invaluable source for the history of music and theatre in the composer's time. Meyerbeer was interred in the Berlin Jewish cemetery in Schönhauser Allee, amongst other members of the Beer family.

The vitriolic campaign of Richard Wagner against Meyerbeer was to a great extent responsible for the decline of Meyerbeer's popularity after his death in 1864. This campaign was as much a matter of personal spite as of racism - Wagner had learnt a great deal from Meyerbeer and indeed Wagner's early opera Rienzi (1842) has, facetiously, been called 'Meyerbeer's most successful work'. Meyerbeer supported the young Wagner, both financially and in obtaining a production of Rienzi at Dresden.

However, Wagner resented Meyerbeer's continuing success at a time when his own vision of German opera had little chance of prospering. After the May Uprising in Dresden of 1849, Wagner was for some years a political refugee facing a prison sentence or worse in Saxony. During this period when he was gestating his Ring cycle, he had few sources of income apart from journalism and benefactors, and little opportunity of getting his own works performed. The success of Le prophète sent Wagner over the edge, and he was also deeply envious of Meyerbeer's wealth. After Meyerbeer's death Wagner reissued his 1850 essay Das Judenthum in der Musik (Judaism in Music), in 1868, in an extended form, with a far more explicit attack on Meyerbeer. This version was under Wagner's own name - for the first version he had sheltered behind a pseudonym - and as Wagner had by now a far greater reputation, his views obtained far wider publicity.

These attacks on Meyerbeer (which also included a swipe at Felix Mendelssohn) are regarded by Paul Lawrence Rose as a significant milestone in the growth of German anti-Semitism.[4]

Meyerbeer's costly operas, requiring grand casts of leading singers, were gradually dropped from the repertoire in the early 20th century. They were banned by the Nazi regime because the composer was Jewish, and this was a major factor in their further disappearance from the repertory. However, the operas are now beginning to be regularly revived and recorded, although (despite the efforts of such champions as Dame Joan Sutherland, who took part in performances of, and recorded, Les Huguenots) they have yet to achieve anything like the huge popular following they attracted during their creator's lifetime.

Amongst reasons often adduced for the dearth of modern productions are the scale of Meyerbeer's more ambitious works and the cost of mounting them, as well as the alleged lack of virtuoso singers capable of doing justice to Meyerbeer's demanding music. However, recent successful productions of some of the major operas at relatively small centres such as Strasbourg (L'Africaine, 2004) and Metz (Les Huguenots, 2004) show that this conventional wisdom is not unchallengeable.