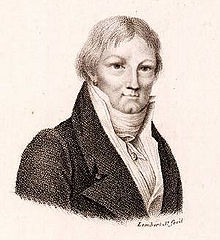 Blasius was born in Lauterbourg, a town in the far north-west corner of France on the Rhineland border of Alsace. This frontier town had been fortified in the late 17th century by Louis XIV and had a large military presence, including many musicians.[1] Both of his parents were German. His mother, a member of the Bugard family, was originally from the South Rhineland town of Schaidt, and his father, Johann Michael Blasius,[2] was from Rastatt in Baden. His father earned his living primarily as a master tailor, but was also a musician and gave his son his first lessons.[1][3] The young Blasius also received lessons from military musicians;[1] a man referred to as Herr Stadt;[2] and his two older brothers: Johann Peter (French: Pierre; born Lauterbourg, 2 September 1752), a violinist; and Franz Ignaz (French: Ignace; born Lauterbourg, 11 April 1755), a bassoonist. Both of his brothers also later worked in Paris.[1][2]

From 1780 to 1782 Blasius worked for the Bishop of Strasbourg, Prince Louis-René-Edouard de Rohan.[2] The Cathedral Kapellmeister and Municipal Music Director of Strasbourg at that time was Franz Xaver Richter. Richter was a co-founder of the "Mannheim School" and a leading music theoretician.[1] In 1784 Blasius went to Paris and in the spring made his debut as the violin soloist and conductor of one of his own concertos at a concert of the Concert spirituel. The performance received favourable reviews.[2][3]

During the earlier period, from 1788 to 1801, the Opéra-Comique underwent significant challenges. Up to that time the theatre had had a virtual monopoly on the performance of French comic opera in Paris, but in 1788 Marie Antoinette gave a license to open a new theatre to her hairdresser and wig-maker, Léonard Autié. Autié sold his license to the Italian violinist Giovanni Battista Viotti, who hired Luigi Cherubini to be the director of the new company. The two men recruited actors from the provinces and singers from Italy. At first the new troupe was named the Théâtre de Monsieur after the king's brother, Louis-Stanislas-Xavier, comte de Provence, who had the court title of Monsieur, and who along with the queen promised their protection to the new group. Later, after a move from the Salle des Machines in the Tuileries Palace to the rue Feydeau, and the fall of the monarchy, it became commonly known as the Théâtre Feydeau.[6]

Initially the Théâtre de Monsieur was forbidden to perform the same repertory as the Opéra-Comique, but this quickly changed. With the invasion of the Tuileries by a mob on 10 August In 1792, the Italian singers returned to Italy, and Viotti fled to England. The Feydeau company, still under the direction of Cherubini, turned to performing French opéra comique. The competition between the two companies, forced the Opera-Comique to upgrade salaries in order to retain the best personnel.[7] In 1794, Blasius' salary at the Opéra-Comique was increased from 2,000 livres to 2,600 livres.[8]

An account of the year VII (1795) refers to the conductor of the Opéra-Comique as "le cit. [citoyen] Blasius", i.e., Citizen Blasius.[9] The repertoire of the Opéra-Comique performing at the Salle Favart during these years testifies to its adherence to the values of the revolution, in contrast to its "rival and emulator", at the Feydeau, which remained true to its aristocratic origins and attracted opponents of the government.[10] In 1793 Blasius had composed the music for a two-act trait historique by Auguste-Louis Bertin d'Antilly called Le Peletier de Saint-Fargeau, ou Le premier martyr de la République française. This piece, which was first performed by the Opéra-Comique at the Salle Favart on 23 February, was based on an event which had occurred only one month prior: Louis-Michel le Peletier, marquis de Saint-Fargeau, was assassinated on 20 January for having voted for the execution of Louis XVI, who was executed on the 21st.[11] Early in 1794 Blasius was one of twelve composers, including Cherubini, who collaborated on a 3-act Revolutionary, patriotic comédie mêlée d'ariettes called Le congrès des rois. The composition, ordered by the Committee of Public Safety, was finished in just two days and first performed in the Salle Favart on 26 February 1794. Unfortunately, the work was not a success, and the Revolutionary purists found much to object to. After only two performances the authorities banned it altogether.[12][13]

By 1800 the competition between the Opéra-Comique and the Théâtre Feydeau had reached an impasse, and it was decided to merge the two companies "by a legal act of union dated 7 thermidor an IX (25 July 1800)".[14] The new corporation was to use the old name Opéra-Comique but perform at the newer theatre on the rue Feydeau. The merged company's first performance there was a program consisting of Étienne Méhul's Stratonice and Cherubini's Les deux journées which took place on 16 September 1801.[15] It was in 1801 that Blasius first lost his position as conductor of the Opéra-Comique orchestra.[5] During his time with that company Blasius had performed and conducted works by Nicolas Dalayrac, André Grétry, and Étienne Méhul, all of whom had praised his conducting skills.[2]

Blasius next worked at other Parisian theaters, first at the Théâtre de la Gaîté, where in November 1801 he conducted the first Parisian performance in German of Mozart's Die Entführung aus dem Serail, with the German company of Elmenreich. Two of his own compositions, the mélodrames Adelson et Salvini and Don Pèdre et Zulika, were first performed at the Gaîté in 1802. Later he worked at the Théâtre de la Porte Saint-Martin, where his Clodomire, ou La Prêtresse d'Irmunsul a three-act mélodrame was first performed on 5 May 1803.[2][5]

In 1795 Blasius received an appointment as professor of violin at the newly founded Paris Conservatoire. He also held other official positions at various times during the Revolution and the Directory.[5] He was a member and director of the National Guard Band from 1793 to 1795, and in 1799 became a conductor of the bands of the Garde Consulaire. In 1802 Blasius lost his professorship at the Conservatoire, and in 1804 he lost his position at the Garde Consulaire, but became director of the Grenadiers de la Garde de Napoléon I.[2][3] Later during the reign of Louis XVIII he became director of the fifth regiment band of the Imperial Guard, and a member of the king's private orchestra.[2] In 1816[2] (or 1818)[5] he retired and went to Versailles, where he died in 1829.

Blasius wrote a number of works for the stage as well as instrumental pieces for Harmoniemusik (music for wind band), concertos with orchestra, and chamber music with a particular emphasis on works for violin, clarinet, and bassoon. He also wrote pedagogical works for clarinet (see next) and bassoon. According to the music historian Deanne Arkus Klein, Blasius' compositions were "influenced by the foreign musicians he encountered in Strasbourg and Paris.... [His] Harmoniemusik for Revolutionary fêtes ... were especially well received [and his] string quartets in particular employ a balance of parts uncommon in France at a time when the virtuosity of the first violin was standard practice."[2]

In 1796 Blasius wrote a treatise on playing clarinet (Nouvelle methode de clarinette et raisonnement des instruments) which included a fingering chart for a five-key instrument built in five sections: mouthpiece, barrel, two finger-hole sections, and stock bell.[16][17] It included separate fingerings for the enharmonically equivalent notes of g-sharp and a-flat.[18] Blasius also advocated using both lips to cover the upper and lower teeth, which modern players refer to as the "double-lip" embouchure: "take good care that [neither] the mouthpiece nor the reed is touched by the teeth. It is necessary to support the mouthpiece on the lower lip to cover the reed with the upper lip, without the teeth touching any of it."[19] Clarinetists of this period typically played with the reed up, so this method avoided the teeth touching the reed. Moreover, this embouchure is normal for the double-reed instruments, oboe and bassoon, and clarinetists at the time often played these instruments as well.[19] In fact, it is known that Blasius also mastered the bassoon and the flute.[1][3]

The works in this list are primarily from The New Grove Dictionary of Music and Musicians[2] with additional sources as noted.