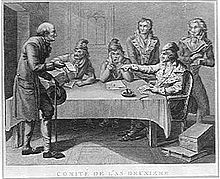 The Committee of Public Safety (French: Comité de salut public), created in April 1793 by the National Convention and then restructured in July 1793, formed the de facto executive government in France during the Reign of Terror (1793–1794), a stage of the French Revolution. The Committee of Public Safety succeeded the previous Committee of General Defence (established in January 1793) and assumed its role of protecting the newly established republic against foreign attacks and internal rebellion. As a wartime measure, the Committee – composed at first of nine, and later of twelve members – was given broad supervisory powers over military, judicial, and legislative efforts. Its power peaked under the leadership of Maximilien Robespierre, between August 1793 and July 1794; following the downfall of Robespierre, the Committee's influence diminished, and it was disestablished in 1795.

On April 4, 1793, the French military commander and former minister of war General Charles François Dumouriez defected to Austria following the publication of an incendiary letter in which he threatened to march his army on the city of Paris if the National Convention did not accede to his leadership. News of his defection caused alarm in Paris, where imminent defeat by the Austrians and their allies was feared. A widespread belief held that revolutionary France was in immediate peril, threatened not only by foreign armies and by recent anti-revolutionary revolts in the Vendée, but also by foreign agents who plotted the destruction of the nation from within. The betrayal of the revolutionary government by Dumouriez lent greater credence to this belief. In light of this threat, the Girondin leader Maximin Isnard proposed the creation of a nine-member Committee of Public Safety. Isnard was supported in this effort by Georges Danton, who declared, "This Committee is precisely what we want, a hand to grasp the weapon of the Revolutionary Tribunal."[1]

The Committee was formally created on April 6, 1793. Closely associated with the leadership of Danton, it was initially known as "the Danton Committee".[2] Danton steered the Committee through the May 31 and June 2, 1793 journées that resulted in the fall of the Girondins, and through the intensifying war in the Vendée. However, when the Committee was recomposed on July 10, Danton was not included. Nevertheless, he continued to support the centralization of power by the Committee.[3]

On July 27, 1793, Maximilien Robespierre was elected to the Committee. At this time, the Committee was entering a more powerful and active phase, which would see it become a de facto dictatorship alongside its powerful partner, the Committee of General Security. The role of the Committee of Public Safety included the governance of the war (including the appointment of generals), the appointing of judges and juries for the Revolutionary Tribunal,[4] the provisioning of the armies and the public, the maintenance of public order, and oversight of the state bureaucracy.[5] The Committee was also responsible for interpreting and applying the decrees of the National Convention, and thus for implementing some of the most stringent policies of the Terror – for instance, the levée en masse, passed on August 16, 1793, the Law of Suspects, passed on September 17, 1793, and the Law of the Maximum, passed on September 29, 1793. The broad and centralized powers of the Committee were codified by the Law of 14 Frimaire (also known as the Law of Revolutionary Government) on December 4, 1793.

The elimination of the Hébertists and the Dantonists, in the opinion of historian François Furet, "had definitively closed the book on a collegial executive: Robespierre was, in fact, the head of the Republic's government."[7] Certainly the strength of the committees had been made evident, as had their ability to control and silence opposition. The creation, in March 1794, of a "General Police Bureau" – reporting nominally to the Committee of Public Safety, but more often directly to Robespierre and his closest ally, Louis Antoine de Saint-Just – served to increase the power of the Committee of Public Safety, and of Robespierre himself.

The Law of 22 Prairial, proposed by the Committee of Public Safety and enacted on June 10, 1794, went further in establishing the iron control of the Revolutionary Tribunal and, above it, the Committees of Public Safety and General Security; the law enumerated various forms of public enemies, made mandatory their denunciation, and severely limited the legal recourse available to those accused. The punishment for all crimes under the Law of 22 Prarial was death. From the initiation of this law to the fall of Robespierre on July 27, more people were condemned to death than in the previous history of the Revolutionary Tribunal.[8]

However, even as the Terror reached its height, and with it the Committee's political power, discord was growing within the revolutionary government. Members of the Committee of General Security resented the autocratic behavior of the Committee of Public Safety, and particularly the encroachment of Robespierre's General Police Bureau upon their own brief.[9] Arguments within the Committee of Public Safety itself had grown so violent that it relocated its meetings to a more private room to preserve the illusion of agreement.[10] Robespierre, a fervent supporter of the theistic Cult of the Supreme Being, found himself frequently in conflict with anti-religious Committee members Collot d'Herbois and Billaud-Varenne; moreover, Robespierre's increasingly extensive absences from the Committee due to illness (he all but ceased to attend meetings in June 1794) created the impression that he was isolated and out of touch.

Fall of the Committee, and aftermath

When it became evident, in mid-July 1794, that Robespierre and Saint-Just were planning to strike against their political opponents Joseph Fouché, Jean-Lambert Tallien, and Marc-Guillaume Alexis Vadier – the latter two were members of the Committee of General Security – the fragile truce within the government was dissolved. Saint-Just and his fellow Committee of Public Safety member Barère attempted to keep the peace between the Committees of Public Safety and General Security; however, on July 26, Robespierre delivered a speech to the National Convention in which he emphasized the need to "purify" the Committees and "crush all factions."[11] In a speech to the Jacobin Club that night, he attacked Collot d'Herbois and Billaud-Varenne, who had refused to allow the printing and distribution of his speech to the Convention.

On the following day, 9 Thermidor according to the Revolutionary calendar (July 27, 1794), Saint-Just began to deliver a speech to the Convention in which he had planned to denounce Collot d'Herbois, Billaud-Varenne, and other members of the Committee of Public Safety. However, he was almost immediately interrupted by a riot of denunciation by Tallien and by Billaud-Varenne, who accused Saint-Just of intending to "murder the Convention."[12] Barère, Vadier, and Stanislas Fréron joined the accusations against Saint-Just and Robespierre. The arrest of Robespierre, his brother Augustin, and Saint-Just was ordered, along with that of their supporters, Philippe Le Bas and Georges Couthon.

A period of intense civil unrest ensued, during which the members of the Committees of Public Safety and General Security were forced to seek refuge in the Convention; the Robespierre brothers, Saint-Just, Le Bas, and Couthon ensconced themselves in the Hôtel de Ville, attempting to incite an insurrection. Ultimately, faced with defeat and arrest, Le Bas committed suicide. Saint-Just, Couthon, and Maximilien and Augustin Robespierre were arrested and guillotined on July 28.

The ensuing period of upheaval, dubbed the Thermidorian Reaction, saw the repeal of many of the Terror's most unpopular laws and the reduction in power of the Committees of General Security and Public Safety. The Committees ceased to exist under the Constitution of 1795, which marked the beginning of the Directory.

The Committee was initially composed of nine members, all selected by the National Convention for one month at a time, without period limits. Its first members, instated on April 6, 1793, were as follows, in order of election.

After Robespierre's election to the Committee on July 27, 1793, the Committee increased its membership to twelve. The list below represents the Committee's membership from the addition of Collot d'Herbois and Billaud-Varenne in September 1793 through the arrest of Hérault de Séchelles in March 1794.