The Bibliothèque nationale de France (BnF, IPA: [bi.bli.jɔ.tɛk na.sjɔ.nal də fʁɑ̃s]) is the National Library of France, located in Paris. It is intended to be the repository of all that is published in France. The current president of the library is Bruno Racine.

The National Library of France traces its origin to the royal library founded at the Louvre by Charles V in 1368. It expanded under Louis XIV and opened to the public in 1692. The library's collections swelled to over 300,000 volumes during the radical phase of the French Revolution when the private libraries of aristocrats and clergy were seized. After the establishment of the French First Republic in September 1792, "the Assembly declared the Bibliotheque du Roi to be national property and the institution was renamed the Bibliothèque Nationale. After four centuries of control by the Crown, this great library now became the property of the French people."[3]

Following a series of regime changes in France, it became the Imperial National Library and in 1868 was moved to newly constructed buildings on the Rue de Richelieu designed by Henri Labrouste. Upon Labrouste's death in 1875 the library was further expanded, including the grand staircase and the Oval Room, by academic architect Jean-Louis Pascal. By 1896, the library had become the largest repository of books in the world, although it has since been surpassed by other libraries for that title.[4]

On 14 July 1988, President François Mitterrand announced the construction and the expansion of one of the largest and most modern libraries in the world, intended to cover all fields of knowledge, and designed to be accessible to all, using the most modern data transfer technologies, which could be consulted from a distance, and which would collaborate with other European libraries. Surprisingly, the library does not maintain a wireless network. In July 1989, the services of the architectural firm of Dominique Perrault were retained. The construction was carried out by Bouygues.[5] Construction of the library ran into huge cost overruns and technical difficulties related to its high-rise design, so much so that it is commonly referred to as the "TGB" or "Très Grande Bibliothèque" (i.e. "Very Large Library," a sarcastic allusion to France's successful high-speed rail system, the TGV).[6] After the move of the major collections from the rue de Richelieu, the National Library of France was inaugurated on 15 December 1996.[7] It contains more than ten million volumes.

The library retains the use of the rue de Richelieu complex for some of its collections. 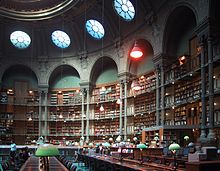 François Mitterrand site, as viewed from the Simone-de-Beauvoir footbridge.

The National Library of France is a public establishment under the supervision of the Ministry of Culture. Its mission is to constitute collections, especially the copies of works published in France that must, by law, be deposited there, conserve them, and make them available to the public. It produces a reference catalogue, cooperates with other national and international establishments, and participates in research programs.