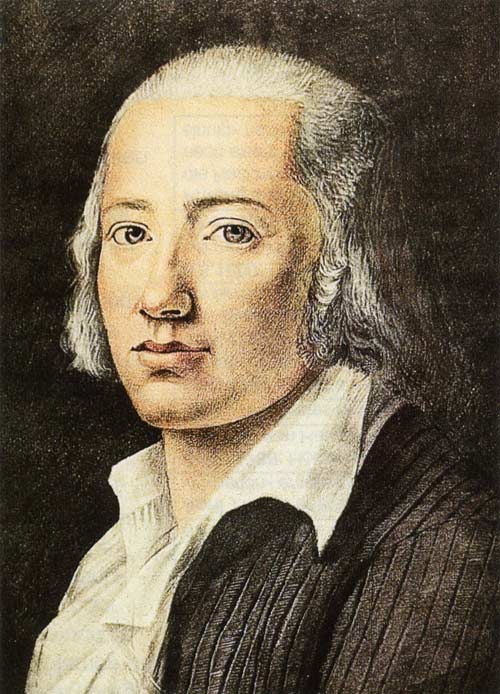 Having spent most of his life tormented by mental illness, he suffered great loneliness, and often spent his time playing the piano, drawing, reading, writing, and enjoyed travelling when he had the chance.

Hölderlin was born in in the . His father, the manager of a church estate, died when the boy was two years old. He was brought up by his mother, who in 1774 married the of and moved there. He had a full sister, born after their father's death, and a half-brother. His stepfather died when he was nine. He went to school in and and then studied at the , where his fellow-students included , (who had been a fellow-pupil at his first school) and . It has been speculated that it was probably Hölderlin who brought to Hegel's attention the ideas of about the union of opposites, which the philosopher would develop into his concept of . Finding he could not sustain a Christian faith, he declined to become a minister of religion and worked instead as a private tutor. In 1793-94 he met and and began writing his "Hyperion". During 1795 he enrolled for a while at the University of where he attended Fichte's classes and met .

As a tutor in from 1796 to 1798 he fell in love with , the wife of his employer, the banker Jakob Gontard. The feeling was mutual, and this relationship was the most important in Hölderlin's life. Susette is addressed in his poetry under the name of 'Diotima'. Their affair was discovered and Hölderlin was harshly dismissed. He lived in from 1798 to 1800, meeting Susette in secret once a month and attempting to establish himself as a poet, but was plagued by money worries, having to accept a small allowance from his mother. He worked on a tragedy in the Greek manner, "Empedokles", producing three versions, all unfinished. Already at this time he was diagnosed as suffering from a severe "", a condition that would worsen after his last meeting with Susette Gontard in 1800. After a sojourn in , probably working on his translations of , at the end of 1800 he found further employment as a tutor in , Switzerland and then, in 1802, in , at the household of the consul. His stay in that French city is celebrated in "Andenken" ("Remembrance"), one of his greatest poems. In a few months, however, he returned home on foot via (where he saw Greek sculptures for the only time in his life). He arrived home in Nürtingen both physically and mentally prostrated. Susette died from in Frankfurt about the same time.

After some time in Nürtingen he was taken to the court of by Sinclair, who found a sinecure for him as court librarian, but in 1805 Sinclair was denounced as a conspirator and tried for treason. Hölderlin was in danger of being tried too but was declared mentally unfit to stand trial. The state of Hesse-Homburg was dissolved the following year after the . On 11 September Hölderlin was delivered into the clinic at Tübingen run by Dr , inventor of a mask for the prevention of screaming in the mentally ill. [ Constantine (1990), p. 299.] The clinic was attached to the University and the poet Kerner, then studying medicine, was assigned to look after Hölderlin for a while. The following year he was discharged as incurable and given three years to live, but was taken in by the carpenter Ernst Zimmer (a cultured man, who had read "Hyperion") and given a room in his house, which had been a tower in the old city wall, with a view across the river and meadows. Zimmer and his family cared for Hölderlin until his death, 36 years later. , a young poet and admirer, left a poignant account of Hölderlin's day-to-day life during these long, empty years. Hölderlin continued to write poetry of a simplicity and formality quite unlike what he had been writing up to 1805. As time went on he became a kind of minor tourist attraction and was visited by curious travellers and autograph-hunters. Often he would spontaneously write short verses for such visitors, confining himself to conventional subjects such as Greece, the Seasons, or The Spirit of the Times, pure in versification but almost empty of affect, although a few of these (such as the famous 'The Lines of Life', "Die Linien des Lebens", which he wrote out for his carer Zimmer on a piece of wood [ Constantine (1990), p. 302.] ) have a piercing beauty and have been set to music by many composers. Hölderlin's own family did nothing to support him but instead petitioned (successfully) for his upkeep to be paid by the state. His mother and sister never visited him, and his step-brother only once. His mother died in 1828: his sister and step-brother quarrelled over the inheritance, arguing that too large a share had been allotted to Hölderlin, and tried unsuccessfully to have the will overturned in court. Neither of them attended his funeral; the Zimmer family were his only mourners. His inheritance, including the patrimony left him by his father when he was two, had been kept from him by his mother and was untouched and continually accruing interest. He was a rich man, and never knew it. [ Constantine (1990), p. 300.]

The poetry of Hölderlin, widely recognized today as one of the highest points of German , was little known or understood during his lifetime and slipped into obscurity shortly after his death; his illness and reclusion made him fade from his contemporaries' consciousness &ndash; and, even though selections of his work were being published by his friends already during his lifetime, it was largely ignored for the rest of the 19th century, Hölderlin being classified merely as a melancholy imitator of Schiller.

In fact, Hölderlin was a man of his time, an early supporter of the &ndash; in his youth at the Seminary of Tübingen, he and some colleagues from a "republican club" planted a "Tree of Freedom" in the market square, prompting the Grand-Duke himself to admonish the students at the seminary. He was at first carried away by , whom he honors in one of his couplets (it should be noted that his exact contemporary Beethoven also initially dedicated his "Eroica" to the Corsican general).

Like Goethe and Schiller, his older contemporaries, Hölderlin was a fervent admirer of ancient Greek culture, but had a very personal understanding of it. Much later, would recognize in him the poet who first acknowledged the Orphic and Dionysian Greece of the mysteries, which he would fuse with the of his native in a highly original religious experience. For Hölderlin, the Greek gods were not the plaster figures of conventional classicism, but living, actual presences, wonderfully life-giving and, at the same time, terrifying. He understood and sympathized with the Greek idea of the tragic fall, which he expressed movingly in the last stanza of his "Hyperions Schicksalslied" ("Hyperion's Song of Destiny").

In the great poems of his maturity, Hölderlin would generally adopt a large-scale, expansive and unrhymed style. Together with these long hymns, odes and elegies &ndash; which included "Der Archipelagus" ("The Archipelago"), "Brot und Wein" ("Bread and Wine") and "Patmos" &ndash; he also cultivated a crisper, more concise manner in epigrams and couplets, and in short poems like the famous "Hälfte des Lebens" ("The Middle of Life"). In the years after his return from Bordeaux he completed some of his greatest poems but also, once they were finished, returned to them repeatedly, creating new and stranger versions sometimes in several layers on the same manuscript, which makes the editing of his works problematic. Some of these later versions (and some later poems) are fragmentary, but have astonishing intensity. He seems also to have considered fragments, even with gaps and unfinished lines and unfinished sentence-structure, sometimes as poems in themselves. Both these tendencies (the obsessive revisions, the stand-alone fragments) used to be taken as proof of his mental disorder, but they were to prove very influential on later poets such as . In his years of madness, Hölderlin would occasionally pen ingenuous rhymed quatrains, sometimes of a childlike beauty, which he would sign with fantastic names (most often "Scardanelli") and give fictitious dates from the previous or future centuries.

Hölderlin’s major publication in his lifetime was his novel "Hyperion", which was issued in two parts (1797 and 1799). Various individual poems were published but attracted little attention and in 1799 he also attempted to produce a literary-philosophical periodical, "Iduna". His translations of the dramas of were published in 1804 but were generally met with derision over their apparent artificiality and difficulty caused by transposing Greek idioms into German. In the 20th century, theorists of such as have vindicated them, showing their importance as a new &ndash; and greatly influential &ndash; model of poetic translation.

Wilhelm Waiblinger, who visited Hölderlin in his tower repeatedly in 1822-3 and depicted him in the protagonist of his novel "Phaëthon", urged the necessity of issuing an edition of his poems and the first collection of his poetry was issued by and in 1826. They omitted anything they suspected might be 'touched by insanity'. A copy was given to Hölderlin, but some years later this was stolen by a souvenir-hunter. [ Constantine (1990), p. 300.] A second, enlarged edition with a biographical essay appeared in 1842, the year before Hölderlin’s death.

Only in 1913 did , a member of the circle around poet , bring out the first two volumes of what eventually became a six-volume edition of Hölderlin's poems, prose and letters (the 'Berlin Edition', "Berliner Ausgabe"). This was to some extent superseded by the Stuttgart Edition ("Grosse Stuttgarter Ausgabe") edited by and , which began publication in 1943 and was eventually completed in 1986. Meanwhile a third complete edition, the Frankfurt Critical Edition ("Frankfurter Historisch-kritische Ausgabe"), began publication in 1975 under the editorship of . This is still in progress.

Though Hölderlin's ic style &ndash; dependent as it is on a genuine belief in the divinity &ndash; can hardly be transposed without sounding parodistic, his shorter and more fragmentary lyric has exerted its influence in German poetry, from onwards, and his elegiac mode has found an apt successor in . He also had an influence on the poetry of and Paul Celan (Celan wrote a poem about Hölderlin, called "Tübingen, January" which ends with the word "Pallaksch" - according to C. T. Schwab, Hölderlin's favourite "which sometimes meant Yes, sometimes No").

Hölderlin was a poet-thinker who wrote, fragmentarily, on poetic theory and philosophical matters. His theoretical works, such as the essays "Das Werden im Vergehen" ("Becoming in Dissolution") and "Urteil und Sein" ("Judgement and Being") are insightful and important if somewhat tortuous and difficult to parse. They raise many of the key problems also addressed by his roommates and . And, though his poetry was never "theory-driven", the interpretation and exegesis of some of his more difficult poems has given rise to profound philosophical speculation by thinkers as divergent as and .

Hölderlin's poetry has inspired many composers, one of the earliest examples and perhaps the most famous being the by , a setting of "Hyperions Schicksalslied". Other composers to have made settings of his poems include , , ("Drei Hymnen"), ("An die Hoffnung"), ("Hyperion"), (who also wrote many piano pieces inspired by individual lines of the poems), , (whose his First Piano Sonata is also influenced by Hölderlin's poem 'Der Main'), , (whose Seventh Symphony is also partly inspired by Hölderlin), ("Hyperion", "Stele an Diotima"), (the "Scardanelli-Zyklus"), ("Hölderlin lesen I-IV"), (who planned an opera on Hölderlin), ("Hölderlin-Phantasien"), ("Hollywood Liederbuch"), (who wrote settings in concentration camp), , ("Hyperion", an epistolary opera) and . 's late piano suite "Gesänge der Frühe" was inspired by Hölderlin, as was 's string quartet "Stille, an Diotima" and parts of his opera "Prometeo". used Hölderlin's German translations of Sophocles in his operas "Antigone" and "Oedipus der Tyrann".

In the 1986 and 1988 Danièle Huillet and Jean-Marie Straub shooted two film "Der Tod Des Empedokles" and "Swarze Sunde" in Sicily both based on the omonimous Holderlin's drama (respectevely for the two film they used the first and third version of the text).