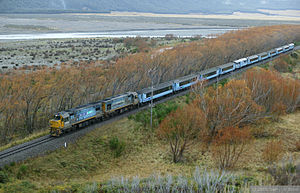 The TranzAlpine, which uses up to nine NZR 56-foot carriages

The NZR 56-foot carriage is a class of 17.07m-long railway passenger car formerly used on almost all long-distance rail transport in New Zealand, and still in service. Some have been preserved.

The first 56 ft carriages were built in 1927, being a development of the then-standard steel-panel Aa class NZR 50-foot carriages. These first six carriages were 50 ft cars with lengthened underframes at the ends, and the cars retained the same bogie spacing as the 50 ft carriages.[1] Designed for sleeper use, these cars were clad in wood initially. All were given the AA classification due to their limited running rights, and were numbered consecutively from AA 1616 to AA 1622. Later they were clad in steel and given new underframes to match the later 56 ft cars.[1] 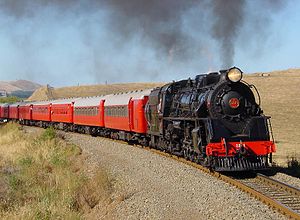 It was not until 1937 that further 56 ft cars were built, to a slightly different design. The new cars had different bogie spacing and a more rounded profile, to allow general route availability.[1] They were classed A, with the initial batch being built at Otahuhu Railway Workshops. It took Otahuhu and Addington Railway Workshops until 1945 to complete the class. There was a large amount of variation in the body arrangement between batches. This primarily reflected the carriage’s use – 2nd Class (X25480), 1st Class, 1st/2nd Class Composite (X25916) or Semi Sleeping - but there was also variations between carriages intended for North Island and South Island use. South Island 1st Class cars (X25495) were built with pressure ventilation and a coupe compartment at one end, while North Island 1st Class cars (X25485) used roof-based vents like 2nd Class cars, and did not include a coupe. Up to 12 2nd Class cars were converted into 20-bed Ambulance cars for use in World War 2 and after the war were converted for general use, six of which were converted for 1st Class use, with four receiving seats of a more modern design, that were later used for the Endeavour Express and The Connoisseur car. Eight out of 11 Semi Sleeper cars were rebuilt as 16-berth all-sleeper cars, one rebuilt as a 14-berth sleeper because it retained the original 4-berth cabin. 56-ft cars quickly became the mainstay of the passenger fleet, being used on the NZR’s important trains in their red livery.

In 1942 two Guard’s vans were built on the same 56 ft type underframe to create vans to match the 56 ft carriage stock.[2] The first two vans had narrow vestibules at both ends, and a further 19 vans built in 1943-44 only had this at one end. These vans were used on principal expresses in both Islands until the 1980s. 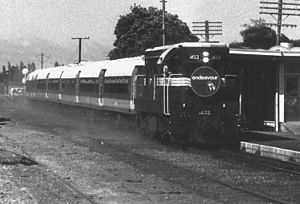 NZR began overhauling a number of 56 ft cars for a new South Island train called the “Southerner”. These carriages were painted blue with a light blue stripe bordered by gold on the sides and white roofs, and received new seating and upholstery to match. Some carriages were highly modified into buffet cars, the first buffet cars on NZR since 1918. Classified AB, these cars had a kitchenette and a full-length buffet counter installed. A similar set of cars was upgraded in the North Island for the new “Endeavour” train from Wellington to Napier. Another set of carriages (including sleeping cars) was overhauled for a new overnight train between Wellington and Auckland called the “Northerner”. These cars were the first to be turned out with the new “Supavent” style of windows,[1] and were painted a mustard yellow instead of blue. All these new carriages were running on new bogies, after a successful trial of a new “deluxe” bogie under 56 ft car A 1622. The bogie type used was initially the same as the FS steam heat vans (X27750, known as a “Kinki” bogie), and later the type of bogie pioneered under the NZR FM guards vans (X28020, known as an “FM” bogie), heavily based on the type of bogies used under the Silver Star classed X28250. This improved the ride quality of the carriages.

The next major change for the 56 ft carriage fleet occurred in 1988: the first carriage with 1m-high panoramic windows, AS2500, was introduced in the South Island for use on the TranzAlpine Express and later re-numbered ASO27,[1] and was quickly followed by further upgraded carriages, primarily on the TranzAlpine. The 2nd servery car upgraded to this large window configuration was to be numbered AS2517 but was released as ASO 14 – the O for Observation denoted the large panoramic windows, and subsequent cars followed this classification. Further carriages were upgraded over the next five years, and some were fitted with air conditioning, a feature not previously used in New Zealand carriages. Four carriages were modified with lounge seating and a large panoramic window in one end, one car incorporating a servery, but no special classification distinguished these cars from the other AOs or ASOs. Other carriages were given upgraded seating and new paint colours but remained on the older style bogies and without air conditioning, for commuter and charter use. Later, some of these cars included air conditioning but retained the smaller Supavent windows

Current use of 56ft Carriages

56 ft carriages still provide the mainstay of all New Zealand’s long distance passenger trains, including the TranzAlpine, TranzCoastal and Overlander passenger services, using carriages rebuilt with panoramic windows. Carriages with Supavent windows are kept as a charter fleet in the North Island. Most of the panoramic carriages are expected to be removed from front-line service in the next two years with 17 new AK carriages to be constructed at Hillside Workshops. They may be retained as new charter fleet cars or be on-sold. A large number of 56 ft cars are now either with small train operating companies (Taieri Gorge Railway, 13 carriages) or in preservation with many railway societies, some which use the cars on main line excursions. None of the car-van van variant remain in use, their use having been supplanted by the newer FM/AG vans. However, examples exist in preservation.

While KiwiRail is phasing out 56-foot carriages, Dunedin tourism operator Taieri Gorge Railway is phasing them in. Due to the tight tunnel clearances on their Taieri Gorge route,[3] TGR is unlikely to be able to use imported carriages such as are becoming widespead on other New Zealand routes.

In September 2007 The Taieri Gorge Railway announced it had purchased 12 NZR 56-foot carriages formerly used on the Wairarapa Connection, to replace its heritage wooden open-platform cars.[4] and its ex-Dunedin suburban NZR 50-foot carriages.[citation needed] The first of these, A2325, was prepared at a cost of $45,000 and ready in September 2008. Although A2325 was the first car put in service, a 13th 56 ft car A2095 had been purchased earlier and conversion begun to a buffet car, which entered service in Nov 2009. Entering service in Oct 2009 was A2277.[5] The company anticipated having three carriages in service by the end of 2008, and all 12 by 2013.[6] The upgrade included new seating, carpets, toilets and external paint. The railway intends to refurbish three carriages each year.[7]