The NZR DX class is a class of 49 Co-Co diesel-electric locomotives that currently operates on New Zealand's national railway network.

Built by General Electric in Erie, Pennsylvania, United States,[1] they were introduced to New Zealand between 1972 and 1976. The class is based on the General Electric U26C model, a narrow-gauge version of the GE U23C model. The U26C is also used in South Africa (see South African Class 34-900), Brazil, Kenya, and, in modified form, in Tanzania/Zambia.

The locomotives were initially confined to the North Island Main Trunk and Marton - New Plymouth Line, due to their high axle loading, and the need for the extra power of the DX on these lines. After the electrification of the central section of the North Island Main Trunk in 1988, members of the class were redistributed, including to the South Island. 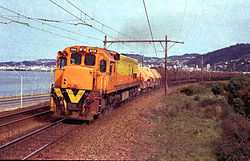 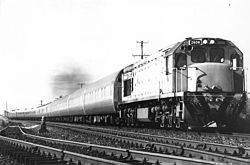 The first 15 members of the class (DX 2600 - DX 2614) were introduced in 1972 to haul freight and passenger trains on the North Island Main Trunk. Initially, they were confined to the NIMT due to their 16.25-tonne axle load being too heavy for many of the bridges on the other lines: several bridges and viaducts on the NIMT had to be strengthened to take the weight of the locomotives.

Before the DX class was introduced, the heaviest freight and passenger trains on the line required two members of the 1,060-kilowatt (1,420 hp) DA class to haul them. The DX class could haul heavier and faster trains than two DA's, even though they produced 70 kilowatts less than the combined DA's. The single DX weighed 97.5 tonnes compared to the two DA's combined weight of 162 tonnes.

There is no clear reason why the class was named the DX class. Diesel mainline locomotive clases begin with "D", followed by another letter - the mystery was why "X". Up to the DX class introduction, all classes had used letters A to J, and shunting locomotives used S. One possible explanation for the X was a reference to the 4-8-2 NZR X class steam locomotives, which ran on the central section of the NIMT between 1909 and 1957, and at the time of their introduction were the most powerful steam locomotives on NZR.

With bridges progressively strengthened throughout the North Island, and to increase capacity on the North Island Main Trunk, 34 more members of the class were introduced in 1975 and 1976.

The DX class was initially used for heavy freight trains on the North Island Main Trunk, especially on the central section where the power was needed, and on the NIMT's overnight passenger expresses. Most of the 49 class members in service by 1976 were used on this line, but a few also operated between Palmerston North and New Plymouth most days of the week, and also occasionally on passenger trains between Wellington and Masterton. In 1974 a DX ventured as far north as Whangarei, and thereafter they saw occasional use in Northland in the late 1970s and early 1980s, but did not have any regular assignments there.

From introduction in 1972 a member of the class was assigned to haul the prestigious Silver Star overnight NIMT passenger express. Previously, the train required two DA class locomotives. The DX class was also used on the Northerner overnight passenger train when it was introduced in 1975.

In 1988 a major reshuffle of the mainline locomotive fleet took place nationwide as a result of the opening of the North Island Main Trunk electrification. For the DX class, this meant leaving the upper North Island, and being split into two fleets for service between Wellington and Gisborne/New Plymouth, and in the South Island. This was the first use of the class on the Palmerston North - Gisborne Line and the northern Wairarapa Line.

In the mid-1990s, a small number of DX's returned to Auckland for use between Auckland and Tauranga, on the Kinleith Branch and between Auckland and Whangarei. This was the first use of the class in regular service east of Hamilton. In 2000, a DX ventured north of Whangarei, which remains the last expansion phase of DX class territory. 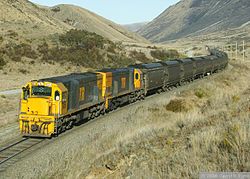 The DX class is still used primarily on heavy freight trains. The majority of the class now operate in the South Island, predominantly hauling coal trains between Solid Energy's West Coast mines and the port of Lyttelton near Christchurch. The trains consist of up to 30 CE class hopper wagons each holding 52 tonnes of coal, and regularly require five members of the class to haul the train through the 3% (1 in 33) Otira Tunnel,[2] and two members to haul it on the other sections of the line. Generally these services are exclusively hauled by the DX class. The DX class are also involved in general freight operations, and also routinely haul the TranzAlpine and Coastal Pacific passenger trains.

In the North Island the DX class are the primary haulers of milk trains to Fonterra's Whareroa factory near Hawera on the MNPL, usually operating in pairs to haul these trains up the 1 in 35 Westmere Bank. The class is also involved in other freight operations in the lower North Island, usually operating singly or in conjunction with DFT class and DC class locomotives.

A small number, including both DXRs, were based in the upper North Island, primarily in general freight use on the ECMT. With the allocation of the new DL class locomotives to that area, these DX/DXR class locomotives were transferred to the South Island in late 2011.

The class periodically haul through trains on the central NIMT when EF locomotives are unavailable or the electrification requires maintenance, and occasionally haul the Overlander and usually the Capital Connection passenger trains. They also, together with other classes, regularly haul the wood product trains between Karioi in the central North Island and Wellington.

With the introduction of the computerised Traffic Monitoring System (TMS) in 1980, the class was renumbered. The DX class received four-digit numbers starting with 5, in which the fourth number is a check digit[1] for the number. The locomotives were numbered in order, with DX 2600 renumbered DX 5016 (6 being the check digit) and DX 2648 renumbered DX 5517. There was no DX 515x or DX 534x as these numbers do not generate a valid check digit, and DX 2639 never received a TMS number.

All the DXB and DXC sub-classes have kept their original TMS numbers. The DXR sub-class received new TMS numbers beginning with 8, numbered irrespective of their DX number. DX 5045 received a new TMS number using the DXR algorithim (5520) when it was upgraded and returned to service following being involved in a fatal derailment at Te Wera in 2002.

Upon introduction, all the DX class members were painted in "clockwork orange". The livery consisted of the locomotive body painted orange except for a yellow segment at the top of the locomotives - roughly the same shape and size as the orange segment on the original KiwiRail livery.

Between 1977 and 1986, the entire class was repainted in the "Fruit Salad" livery - red, grey, and yellow, which most of the class wore until the end of the decade. This livery had the road numbers displayed on the sides of the locomotives in large white numbers. The first to be painted as such was DX 2612. From then, members of the DX class have received liveries including Cato Blue (Fruit Salad with blue instead of red), Bumble Bee (black and yellow), Corn Cob (green and yellow) and KiwiRail (grey, orange, and yellow).

The locomotives received an upgrade during 1988 with the introduction of single-manning to improve visibility for the driver, with a large single front window replacing the original two small windows.

There are two sub-classes of the DX - DXB and DXC.

The classifications DXB and DXC have modifications including modified air intakes, heavier drawgear, electronic traction control systems, uprated engines, new cabs, DC class-style low short hoods and higher power traction motors. The main purpose of these modifications has been to enable the class to be used on the Midland line between Lyttelton and Greymouth in the South Island, particularly in the difficult 8.5 km Otira - Arthur's Pass Otira Tunnel section, which was formerly electrified. DXC denotes the locomotive has been fitted with modified air intakes ("chutes"), while DXB denotes the locomotive is fitted with the BrightStar control system (also fitted to DXCs). Thirteen of the original batch of 15 have been upgraded to DXB standard (DXC 5039 and DX 5045/DXC 5520 being the exceptions), and most of those from the subsequent batches upgraded to DXC standard - exceptions being DX 2639 (long since withdrawn from service), DX 5448 (upgraded to DXB only, due to a cracked frame) and those rebuilt to DXR (DXs 5362 and 5235). 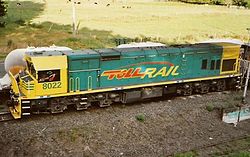 In 1993, New Zealand Rail Limited undertook a significant rebuilding of DX 5362 into the first of what was to be a new sub-class, the DXR. DX 5362 had arrived at Hutt Workshops early in 1989 suffering a cracked frame; it was rebuilt and became the first of the new sub-class. The use of 'R' (like the DBR class) denotes that the DX had been rebuilt. The locomotive features a new diesel engine, new upgraded traction motors and is of radically different appearance to other DX class locomotives, with an enlarged "Universal Cab". The GE classification for the DXR is C30-7M (DXR). The DXR class was the most powerful class of diesel-electric locomotive ever operated in New Zealand, until the introduction of the DL class locomotives in 2010. The DX rebuilding programme was to be much like the rebuilding of the DF class into the DFT class. However, due to the privatisation of New Zealand Rail Limited (renamed Tranz Rail in 1995) later in 1993, the new management decided not to undertake further DX class rebuilds. During the Tranz Rail years, only one more locomotive was rebuilt to the original DXR specification, DX 5310, in 2001 following a derailment at Picton in 1995.[3] It did not receive a new DXR style cab, so retained its original DX classification. It was overhauled and fitted with chutes in late 2010, and now carries the classification DXC 5310.

Following the purchase of Tranz Rail by Toll in 2003, the new management authorised the rebuild of DX 5235, which became DXR 8022. The new DXR did not follow the same lines as the previous locomotive, and in 2006 DXR 8007 was again rebuilt at the Hutt Workshops more closely along the lines of the newer DXR. In 2007, DXR 8022 was one of the locomotives involved in a biofuel trial using of a fuel mix of 5 per cent biodiesel and 95 per cent regular diesel over a period of six months.[4]

As of 2010, only one DX class locomotive had been withrdawn from service. DX 2639 was involved in a crash south of the Parnell Tunnel near Newmarket Train Station, Auckland, at around 4:00pm on 23 March 1977. The locomotive was hauling a Wellington to Auckland express freight train when it crashed head-on into an Auckland to Helensville passenger train that was on the wrong line. The cause was related to human error during a signalling failure. DX 2639 was subsequently written off and scrapped.[5]