The EF class was built by Brush Traction in Loughborough, United Kingdom between 1986 and 1988. They were built to run on the new electrified central section of the NIMT, and the first two members, 30007 and 30013, were involved in the testing of the new electrification system. The locomotives, at 3,000 kilowatts (4,000 hp), are the most powerful locomotives to operate in New Zealand, and the design of the class has been used in designing other electric locomotives overseas, including the Le Shuttle Eurotunnel Class 9 electric locomotives that operate in the Channel Tunnel between the United Kingdom and France.

The North Island Main Trunk is at 681-kilometre (423 mi) long rail line that links New Zealand's capital Wellington and New Zealand's largest city Auckland, and is one of the major backbones of the country's rail network. The line opened in 1908, and included various engineering feats on the central section between Hamilton and Palmerston North, including the world famous Raurimu Spiral and numerous viaducts - five of which are over 70 metres (230 ft) high.

Electrification of the North Island Main Trunk was first proposed as early as 1918 due to coal shortages during World War I, and later was proposed in the 1950s when diesel locomotives started to replace steam. The section between Wellington and Paekakariki was electrified in 1938 at 1500V DC to prevent steam build-up in the long Tawa tunnels near Wellington and to provide banking on the steep seaside section from Paekakariki to Pukerua Bay.

Following the oil shocks of the 1970s, the National government, led by Prime Minister Rob Muldoon, launched the "Think Big" energy development projects. One of the projects involved the electrification of the 411 kilometres (255 mi) of the NIMT between Palmerston North and Te Rapa. This section was chosen for the topography of the line between these two cities, and the advantages electric locomotives had over diesel in this area. The 2,050-kilowatt (2,750 hp) DX class diesel-electric locomotives, then the mainstay of the NIMT and only recently introduced themselves, could handle 720-tonne freight trains on the section, but when climbing the 1 in 52 gradient of the Raurimu Spiral, could only average 27 kilometres per hour (17 mph). A more powerful locomotive however, in this case an electric locomotive, could haul a 900-tonne freight train up the same section of track at a speed of 45 kilometres per hour (28 mph). Electric trains also had their advantage with the oil shocks of the time. New Zealand is dependent on oil from the rest of the world to supply diesel locomotives. Meanwhile, New Zealand's electricity supply is mainly generated from renewable hydroelectricity (hydroelectricity generated 84.5% of New Zealand's electricity in 1980[1]), and therefore electric trains do not have to rely on overseas oil to operate.

The locomotives are able to generate a continuous power output of 3,000 kilowatts (4,000 hp), making the class the most powerful to operate on the NZR network. They also feature the unusual wheel arrangement of Bo-Bo-Bo, which had been previously used on the 1952 EW class and the 1968 DJ class. The advantage of using the Bo-Bo-Bo arrangement over the traditional Co-Co arrangement is that it provides greater flexibility for New Zealand's lightly laid and sharply curved tracks, resulting in less wear on the rails.

The EF class were nicknamed "Toasters" by New Zealand rail enthusiasts due to their boxy shape.

Prior to the Stratford - Okahukura Line being mothballed usual operating practice was for the services originating from Auckland/Hamilton and Stratford to meet at Taumarunui and exchange trains there with an EF regularly hauling the Hamilton-Taumarunui-Hamilton legs. With the mothballing of this line most services now run direct between Palmerston North and Te Rapa. 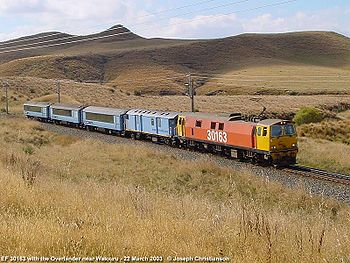 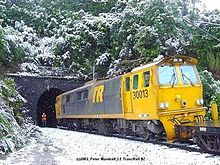 Electric-hauled passenger services originated later, due to the New Zealand Railways being skeptical about electric locomotives on passenger trains, and the fact the then daylight NIMT service, the Silver Fern, utilised diesel-electric rail cars. When the locomotive-hauled Overlander daylight service replaced the Silver Fern in December 1991, EF class locomotives were used on the Hamilton to Palmerston North section of the journey, and later, the locomotives were used on the overnight Northerner passenger service until it was cancelled in November 2004. Electric locomotives are regularly used on the central section of the NIMT to haul the Overlander.

With the EF class being relatively young (the oldest EF class locomotive is only 23 years old), there have been very few upgrades to the locomotives. The locomotives also cannot access the main Hutt Workshops near Wellington due to Wellington's electrification being a different voltage, and therefore must be towed by a diesel to access the workshops.

EF 30007, after being out of action for some time, received a full overhaul including transformer and traction motors in 1993. The remaining 19 locomotives were similarly treated during 1994. This work was performed at the Hutt workshops.

In July 2010, EF 30065 and EF 30128 were being assessed to see if they are able to be made ready to again enter service on the NIMT, having been held in storage for many years at Palmerston North. It is hoped that reinstating the locomotives will help to ease pressure on the working fleet, especially as locomotives are currently regularly out of service for modification and re-branding. EF 30065 was placed on second-hand bogies and moved to Hutt Workshops in August 2010 to begin the assessment, followed by EF 30186 in September, although no announcement had been made on its future.

Of the 17 EF Class locomotives currently in service, 9 are painted in a livery other than the original International Orange scheme that they were introduced in;

The rust removal and repaint into the new KiwiRail scheme began in September 2009 with EF 30163, followed by EF 30059 in February 2010, EF 30134 in March 2010, EF 30249 in April 2010 and EF 30226 in July 2010. It is to be expected that if EF 30065, EF 30128 and EF 30186 do re-enter service, they to will be rebranded in KiwiRail livery. No EFs were ever painted in the Toll Rail "Corn Cob" scheme. So far, the KiwiRail repainting has been done in Wellington, which means the locomotives must be towed (as part of a diesel hauled freight service) to and from Wellington. The units painted in International Orange (except EF 30007) have the road numbers displayed in large type in the centre of the body, while the other schemes have them in smaller type on the cabs.

From of June 2006, locomotives have been fitted with AAR style couplers, each weighing over 400 kilograms (880 lb), to allow them to pull heavier trains.

Five EF class locomotives have been withdrawn from service following accidents or a lack of spare parts:

The EF class design was used as the basis for the Le Shuttle Eurotunnel Class 9 locomotives used in the Channel Tunnel by the Eurotunnel Shuttle Service, as a proven design was required. The Le Shuttle locomotives were also built by Brush, Loughborough, UK and were scaled up to the standard rail gauge and larger loading gauge used in Europe.