The Taieri Gorge Railway (TGR) is a railway line and tourist train operation based at Dunedin Railway Station in the South Island of New Zealand. The railway is a council-controlled trading organisation[1] (formerly known as a local authority trading enterprise) operated by a trust owned jointly by the Dunedin City Council and the Otago Excursion Train Trust.[2]

Train travelling through the Taieri Gorge 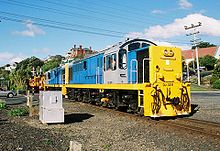 DE class locomotive on the railway.

The Otago Excursion Train Trust was formed in 1978 to operate excursions on the Otago Central Railway line. In 1990 the line beyond Taieri was closed by the New Zealand Railways Corporation. The Trust then stepped in, in partnership with the Dunedin City Council to form the Taieri Gorge Railway Limited, purchasing the line as far as Middlemarch, along with some locomotives. The line beyond Middlemarch was lifted during 1991, and the trackbed handed over to the Department of Conservation in 1993. It is now the Otago Central Rail Trail, a major cycling tourist attraction in the area.

The railway is New Zealand's longest tourist railway and stretches along the former Otago Central Railway from the 4 km peg on KiwiRail's Taieri Branch, 18 km west of Dunedin, to Middlemarch, a distance of some 60 kilometres. Between Dunedin and the start of the line its trains operate on KiwiRail's Main South Line via a running rights agreement.

The line travels through spectacular scenery along the banks of the Taieri River, through numerous tunnels and climbing along the Taieri Gorge to the Strath Taieri. It crosses a dozen viaducts, including the southern hemisphere's largest wrought iron structure, and passes through ten tunnels.[3] The train operates daily to Pukerangi and on summer Fridays and Sundays to Middlemarch.

The OETT also operates the Seasider tourist train along the coast to Palmerston, north of Dunedin, with bus connections to the TGR at Middlemarch.

All trains currently[update] include some of TGR's 11 ex-New Zealand Government Railways 'Scarrett' heritage carriages built 1915-23 in wood with open platform ends and gangways and 37 seats.[4] TGR intends to replace all these carriages.[3]

TGR has four steel-clad NZR 50-foot carriages, formerly used on Dunedin suburban trains. These have 30-37 seats, enclosed vestibules and covered gangways and were built by New Zealand Railways Department in 1930-33.[4]

TGR has three all-steel air conditioned panorama cars with open platform ends and open gangways similar to the 'Skarrett' cars, known locally as 'Jungle Gyms' due to the nature of their framework when under construction. These were designed and built by TGR's own staff during 1986-93 with a "very distinctive shape to fit the tunnels".[4]

In September 2007 the TGR announced that it had purchased 12 NZR 56-foot carriages formerly used on the Wairarapa Connection to replace its heritage wooden open platform cars[3] and its ex-Dunedin suburban NZR 50-foot carriages.[citation needed] The first of these, A2325, was prepared at a cost of $45,000 and was ready in September 2008. The company anticipated having three carriages in service by the end of 2008, and all 12 by 2013.[5] The upgrade included new seating, carpets, toilets and external paint. The railway intends to refurbish three carriages each year.[6]

In the early 2000s the TGR investigated the possibility of introducing log haulage between Mount Allan and Port Chalmers at the end of the Port Chalmers Branch. However on 12 June 2007 it was announced that a cost difference of NZ$5 million existed between road and rail haulage in favour of road, and potential government subsidies were insufficient to close the gap. The announcement was met with disappointment by the Dunedin City Council, which favourably viewed the rail option as it was more environmentally friendly and would have reduced traffic congestion.[7]

It has since been worked out that with extra damage caused by the logging trucks on the Mosgiel to Port Chalmers road that it would have been cheaper to perform the operation by rail, but despite pleas by the local council, Wewka, the relevant company, said it had invested too much in the road option to change its plans.[citation needed]

The route's loading gauge restricts the maximum size of rolling stock that can operate on the railway; some freight wagons cannot use the line.[4]