The ADK class consists of nine diesel multiple unit (DMU) cars each coupled to an ADB class trailer, operating on Auckland's suburban rail network. The Auckland Regional Council (ARC) owns these units, and they are operated by Veolia. 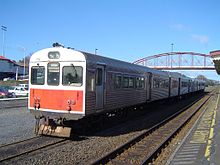 They were purchased along with the newer ADL/ADC class units by New Zealand Rail Limited in 1993 to replace suburban carriage trains then used in Auckland. Later that year, they were sold by NZR to the Auckland Regional Council. The units were credited with an increase in patronage in the Auckland system, but have a number of reliability problems due to their age.[1]

In 2004 the ARC funded the upgrade of the entire class, which included refurbishment of the interiors of the units and the painting of the exterior in the new MAXX colour scheme. The upgrade also include mechanical improvements which would extend the useful life of these units by 10 years. After the upgrades were completed, ADK/ADB trains ran as permanent 4-car sets rather than the 2-car sets they ran as previously.[2] All ADKs are refurbished, except ADB 773 (stored at Westfield) and ADK 689 (which never came to New Zealand).

All ADK units have been scheduled to be decommissioned by the end of 2015[3] at the end of the Auckland rail electrification project.