The NZR RM class 88-seaters were a class of railcar used in New Zealand, known unofficially as 'articulateds', 'twinsets', 'Drewrys' and 'Fiats'. They were purchased to replace steam-hauled provincial passenger trains and mixed trains. New Zealand Railways classed them RM, the notation used for all railcars, numbering the 35 sets from RM100 to RM134.

In the early 1950s, New Zealand Railways were in the process of replacing steam traction with diesel and modernising the railways to cope with vastly increased traffic, the after-effects of wartime stringency, and increasing competition from motor vehicles and aeroplanes. As part of this modernisation process, it was decided to upgrade provincial passenger services, which were provided by a combination of steam-hauled passenger trains that operated several times a week, and "mixed" trains that carried both freight and passengers. An order was placed with the Drewry Car Company in the United Kingdom, which had supplied some smaller diesel shunters previously. They presented a design for an articulated railcar with seating for 88 passengers. The use of horizontal diesel engines allowed increased passenger capacity and a large parcels/baggage compartment. Fiat 210 hp units were selected. The 88-seaters were constructed by the Birmingham Railway, Carriage and Wagon Company Ltd under contract from Drewry.

From almost the beginning they faced mechanical problems, with cooling being the primary issue. The engines had been designed for Italian naval boats and were unsuitable for the conditions. Although modifications were made they continued to have a reputation for unreliability throughout their career, frequently having to run with one motor isolated. 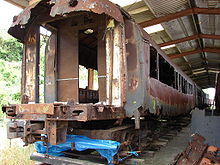 Unfortunately for NZR, the 1950s was a period of increased prosperity and saw massive increases in the numbers of private motorcars, along with improvements to roading such as tarsealing the main highways, and construction of the Auckland Harbour Bridge. These meant dramatic falls in passenger numbers, and in 1967-68 all railcar services from Auckland were cut except for the service to New Plymouth. This was cut back to operate between New Plymouth and Taumarunui in the early 1970s, with passengers making connections to North Island Main Trunk trains. All cancelled trains were replaced by New Zealand Railways Road Services buses.

Although the remaining services were to areas not well served by road, the mechanical condition of the 88-seaters meant that by the mid 1970s replacement was becoming urgent. It was decided to refurbish 14 of them, remove their engines and drivers' cabs, and convert them to what was known as AC class unpowered carriages. These were painted green and came to be known as 'grassgrubs'. They ran on the New Plymouth to Taumarunui, a newly reintroduced Napier to Gisborne service, Wellington to Palmerston North via the Wairarapa, Picton to Christchurch, and Christchurch to Greymouth services. The final run of an 88-seater railcar was in 1978 from Greymouth to Christchurch. The last trip came to an ignominious end when an engine failure and fire meant that passengers had to be taken onwards from Otira by bus.

The 'grassgrubs' were ill-fated. Their drawgear and bodies were not designed to be locomotive-hauled and they quickly wore out. By 1985 they had been withdrawn from service due to metal fatigue. Most of the passenger runs were continued after their demise, but the New Plymouth-Taumarunui service ended in 1983 (having already had its rolling stock replaced by 56 ft cars), and by the late 1980s the Wellington-Wairarapa service was abbreviated to terminate in Masterton as patronage on the Masterton - Palmerston North section was often fewer than 20 passengers per trip, due to improved highways and bus services. The AC class vehicles were replaced by NZR 56-foot carriages on the remaining Wellington-Napier, Picton-Christchurch, Wairarapa and Christchurch-Greymouth services.

In 1968, at the suggestion of Hamilton City Council, an 88-seater was refurbished for a new fast service between Hamilton and Auckland aimed at the businessman, and it started on Monday, 8 April 1968. It was fitted with carpet and reupholstered fabric-covered seats, and was painted in a new two-tone colour scheme that prompted the nickname 'Blue Streak'. The seating was reduced to 84 to accommodate a servery area from which light meals and assorted alcoholic and non-alcoholic drinks could be purchased. This initial service was unsuccessful, with patronage well below levels needed to be profitable.

It was decided to introduce the railcar to a daytime service between Auckland and Wellington in conjunction with the Scenic Daylight carriage train. This service, which started on Monday 23 September 1968, was highly successful and prompted the conversion of two further cars to 82 seats each to accommodate larger servery areas and, later, the purchase of the dedicated Silver Fern railcars for this service.

Initially, the Blue Streak railcar ran from Wellington to Auckland on Mondays, Wednesdays and Fridays and on Tuesdays and Thursdays from Auckland to Wellington until a second railcar was refurbished for the Christmas 1968-New Year 1969 period and a third for the 1969 Easter holidays. The service proved so popular that it was not uncommon to see two Blue Streaks running in multiple in one direction, with the third paired up with an unrefurbished red 88-seater in the other, and the Scenic Daylight carriage train ceased operating.

On Thursday 18 December 1972, the Blue Streaks were replaced by the new Silver Fern railcars and transferred to the Wellington to New Plymouth service, replacing Standard railcars. They continued on this service until Friday 30 July 1977. By that time they were no longer serviceable, patronage had continued to decline and the service was replaced with buses. 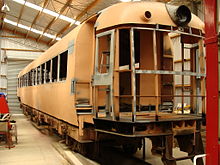 One half of RM 121 in the Railcar Storage Shed at Pahiatua Railway Station. 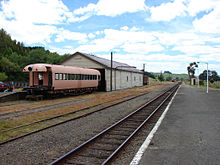 Following withdrawal from service a number of RM class were stored around the country. Several units along with Vulcan RMs were sold to the abortive Southern Rail preservation project at Christchurch where they were scrapped; the cab and baggage car section of the No.1 end of RM 119 on the leading bogie together with some engines and gearboxes were kept at this time. After the project was wound up, the partial section of RM 119 was moved to Linwood Locomotive Depot where it remained in storage for several years. Subsequently the further abbreviated RM 119 consisting of just the cab and part of the baggage compartment was stored in a Bromley scrapyard, where it was found and purchased by the RM 133 Trust.

By the early 1990s it appeared that an 88-seater would not be preserved. The only one believed still to be in existence was a 'grassgrub', former RM 133, used for fire training at Auckland Airport. Fortunately in 2001 the RM 133 Trust was able to obtain this car, with one end fire damaged. In addition both sections of RM 121 were located, the No.2 end being found and recovered from a quarry near Kerikeri. The No.1 end was located at Waitomo, being used as a motel unit, and has since been relocated to Pahiatua.[1] Restoration work has begun on the No.2 unit which has been welded back together, having been cut in two at some stage.