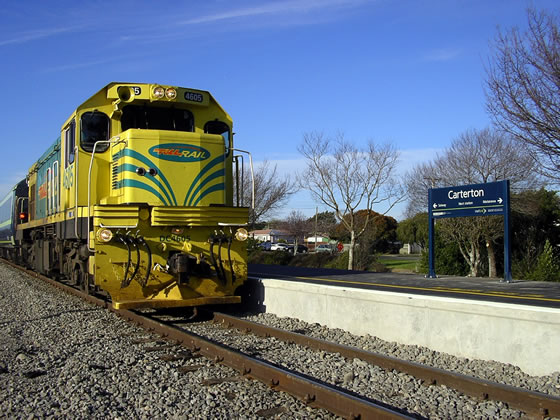 The Wairarapa Connection is an interurban railway passenger commuter service in , between in the and on the . It is run by Wellington suburban operator and thus is not considered to be a long-distance passenger service, unlike 's similar Capital Connection between and .

Comprising of diesel-hauled carriage trains since 1964; previously, Wairarapa class s, 88 seater railcars, the , and steam-hauled s were used on this route. In 1964 six 56-foot former second-class cars from the were transferred north and fitted with Webasto kerosene-burning heaters for the service. They seated 336 on two-person bench-type seats: class A passenger-only cars seated 56 and AL car-vans (with luggage compartment) seated 47.

In 1976 three more As and an AL were added. They were later joined by another A and AL. These six cars were also 56' ex-second class cars and were thoroughly overhauled. They were fitted with fluorescent strip lighting in Northerner and Endeavour cars, and painted in a new, brighter shade of red, with white roofs as opposed to the standard silver oxide.

One AL was thoroughly refurbished with 46 seats to a design created by staff for use on the and , and was put on the service between Napier and that connected with the Endeavour. The second AL followed suit, although it did not join the Gisborne expresses. In 1985, the third AL became part of a promotional New Zealand Police train, then a non-revenue vehicle and finally, in 1993, an air-conditioned 49-seat car for the Northerner and Overlander. The last three cars, each with only one toilet and Scarrett seats for 59, joined the Gisborne-Napier service, but returned to the Masterton route following the redeployment of rolling stock in the wake of a Silver Fern railcar derailment in 1981 and the decision to run the Endeavour as a through service between Wellington and Gisborne, once daily each way simultaneously, in 1984.

Of the second six cars, the first AL also joined the Picton and Greymouth runs in 1982-83. In 1991 one car was thoroughly overhauled and refurbished with 50 Addington-built seats arranged in bays of four, alcove-style (like the cars on the re-introduced Southerner of 1988, but with sheepskin wool seat covers) for the reinstated and revitalised long-distance commuter train. In 1992, one car was rebuilt into a 32-seat servery car, similar to the Southerner servery cars, including alcove seating but with seats of a much more recent design. The other three cars remained on the Wairarapa services.

In the early 1980s, with the refurbishment of the Picton and Greymouth services and the decision to utilise the former Endeavour carriages on new Gisborne-Wellington services, former 88-seater railcars, painted a distinctive green and nicknamed "Grass Grubs", were introduced to the Wairarapa service. These vehicles proved to be far superior in passenger comfort, so much so that seats from decommissioned 88-seaters were installed in the Silver Fern railcars.

However, the underframes were not designed to be towed in the long term and they deteriorated rapidly, bringing about their demise. The introduction of the EM class s to the Wellington suburban system meant 11 56-foot carriages were free for re-allocation, and the cancellation of the unnamed daylight successor to the that ran between and freed more. A wooden 50-foot Z bogie box wagon was refitted with bogies that enabled it to run at passenger-train speed and was painted the same shade of bright red as the cars it accompanied. In the style of the new Fastrak and Northtrak express parcels logos that emphasised the new approach and priority of parcels traffic, the wagon had a logo known as Waitrak, hinting at its being dedicated to Wairarapa services.

In 1989, with the introduction of the between Wellington and Napier, the three remaining Endeavour cars, of which two were ALs, became redundant, so the 54-seat A car and one 46-seat AL were assigned to Wairarapa services. With the streamlining of Greymouth expresses into one out-and-back operation, one Picton car became surplus to requirements and joined the Masterton fleet. In early 1991, the former 54-seat Endeavour car was rebuilt as a "big window" rear-view observation car for the Express, the successor to the West Coast Express. In the same year, the former Picton/Greymouth car was refurbished similarly to Southerner cars with alcove seating, and the former Endeavour AL was refurbished with the same seating arrangement for the Capital Connection. Both cars retained their Addington-built seats, which had minor modifications made to them to increase comfort.

At the end of that year work had begun on rebuilding one car as the first air-conditioned "big window" rear-view observation car for the "new" Northerner/Overlander.

In 1993, after the successful re-introduction and rebranding of the Capital Connection service, a similar refurbishment and rebranding programme was initiated for the 16 Wairarapa carriages and, though only 12 were actually overhauled. This programme lasted four years, until 1997. Six A cars and three of four ALs were thoroughly overhauled and refurbished with a new-style seats, the same as those in the third NIMT servery car and the new air-conditioned "big window" trainsets being assembled at that time. These vehicles were fitted with cloth against the interior walls to reduce noise and were fully carpeted. A cars seated 59, as one toilet from each car was removed to increase seating capacity, while ALs seated 46. The other two A cars and the remaining AL were overhauled but retained their Scarrett seats, reupholstered with material cloth.

The overhauls saw the introduction of the new blue livery, with a 220-mm white stripe and 100-mm green band inside it running the length of each car, with "Cityrail" emblazoned on both ends of each car. In 1995, as an interim measure leading up to the phasing in of the new all-over blue livery of the new corporate image, a light blue 350-mm full-length stripe was introduced, and a new name for Cityrail: . From the beginning of the refurbishment of the seventh car, the new Cato blue livery was applied, along with the Tranz Metro logo.

Of the four unrefurbished cars, two were repainted and operated in the Capital Connection until that train was re-equipped with ex- stock.

One car, after being outshopped in early 1994 following its refurbishment, served on the Bay Express for a while. In 1995 two of the four ALs were equipped with generators similar to those installed in power-baggage vans utilised by long-distance passenger trains, making them power-luggage vans. In 2002 one car was refurbished for the Wairarapa but retained original seating, albeit reupholstered. In 2003 the other car was rebuilt and refurbished for use as a "small window" air-conditioned car for the NIMT passenger trains. A third car was stripped to the underframe but retained its compartment-dividing walls for profile purposes, while the fourth was scrapped.

From 1999 onward, due to age and related deterioration, gradual withdrawal from service of older carriages occurred, and cars from long-distance services were utilised on the interim. These included two former Auckland charter cars that were refurbished in 1993, which later became "no frills" NIMT passenger cars offering cheaper accommodation, later fitted with air-conditioning. These two cars were then permanently allocated to the Wairarapa runs.

From 1995 until 2001 two former Bay Express cars operated on the Masterton line irregularly.

A former 1988 Southerner car turned NIMT no-frills car, later fitted with air-conditioning, was then permanently allocated to the Wairarapa runs. The sole remaining former single-lavatory first-class car, which served in the 1970 Southerner, 1988 Northerner and, as a "Backpackers" car, the Express in 1996, was also working this service in 2003. While on the TranzCoastal it was fitted with air-conditioning. This is not the first time this carriage has worked the Wairarapa services: in 1995, while assigned to the NIMT and sporting the InterCity blue with white stripe and green band, it assumed Wairarapa duties for a time with the first car-van to receive a generator.

A former Southerner, Northerner and carriage also ran on Wairarapa Connection services in 2006.

In 2006 won the contract from the Greater Wellington Regional Council to rebuild 18 former British Rail Mark 2D to Mark 2F 20-metre carriages, to replace the existing fleet. The new cars are classified SW for cars with passenger saloon only, SWS with servery and SWG with luggage compartment and generator for power supply. The S stands for "Scenic Series" and "W" for "Wairarapa", to distinguish them from their Capital Connection counterparts, classified S. There are three sets, each consisting of one SWG, one SWS, and between two and five SWs.The standard configuration of each set is; 1xSWG, 1xSWS, 1xSWS then the remaining SW carriages.

The first run in service was a few days latter on Thursday 18th May with train 1602, departing Wellington at 8.25am

In early 2007 the longest Wairarapa Connection consist (seven cars and van), which formed the weekdays 6.30am from Masterton and 4.33pm from Wellington, had five cars replaced by ones from the now-disbanded charter fleet so that their Korean bogies can be overhauled and placed under five of the new SW cars. The charter cars run on old NZR Timken bogies limited to 80 km/h, not the 100 km/h standard carriage train speed.

In September 2007 the eight A and three AL ex Wairarapa Connection cars that had been sent to Dunedin for bogie removal and storage were sold to the , who are refitting them with Timkin bogies reclaimed from their own cars.

There are five services each way between Masterton and Wellington Monday to Thursday, six on Friday and two on Saturday and Sunday, with train numbers as follows:

* [http://www.nzetc.org/tm/scholarly/Gov12_12Rail-fig-Gov12_12Rail047a.html A photo of a Wairarapa railcar approaching Wellington, alongside Wellington Harbour c1938]
*
*