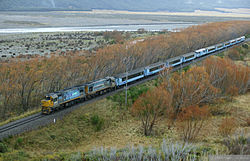 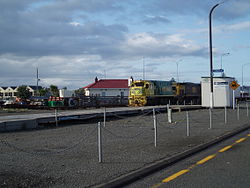 The locomotives started life as members of the since-withdrawn Da class diesel-electric mainline locomotives, built by General Motors Canada. Between 1978 and 1983 they were rebuilt as EMD model G22AR, the DC class, with a new cab and upgraded engines. Five were rebuilt at Hutt Workshops near Wellington, the other 80 at Clyde Engineering in Australia.

In December 1998, DC 4588 was shipped to Tasmania for use on TasRail, part-owned by Tranz Rail through the Australian Transport Network. The locomotive was originally leased by TasRail, but has since been sold to them. It was sold for scrap in 2011, after being in storage since 2002.[1]

Each DC locomotive has a General Motors 12-645C or 12-645E V12 diesel engine and four traction motors, with an authorised maximum speed of 100 km/h. The locomotive is 14 metres long and weighs 82 tonnes.

A subclass of the DC class, the DCP class, was established in 2002 to differentiate the locomotives owned by Tranz Scenic 2001 Ltd from those owned by Tranz Rail Ltd.

The DCP classification was retained on these locomotives after the purchase of Tranz Scenic 2001 by Toll NZ, and continues to be used by KiwiRail. In 2008, DC 4277 was reclassified DCP, followed by 4755 in August 2009 and 4450 in October 2009. In the North Island, the DCP class is used in a general pool of locomotives with the DC class, working both freight and passenger services. In the South Island the DCP class remains in dedicated passenger service. DCP 4663, 4818 and 4945 are leased to Veolia Transport Ltd in Auckland for suburban passenger use.

Due to an increase in demand during March and April 2011, and an overall increase in rail patronage, the Mayor of Auckland, Len Brown, announced that longer trains would be provided on the Southern and Eastern lines. These trains are configured in sets of four SA cars and a SD driving car with a DC locomotive.[2]