The New Zealand Railways EO class of 1923 were electric locomotives used on the steep Otira to Arthur's Pass section of the Midland Line. They were primarily for pulling trains through the 8.5 km Otira Tunnel to avoid the buildup of steam, smoke and soot.

When the Otira tunnel was being built, steam locomotives were not considered for use in the tunnel, because smoke would build up in the tunnel and be difficult to clear. Tenders were received from English Electric, and a company in New York. Due to the economic situation at the time, the tender was given to English Electric[citation needed]. And so on the 10 April 1923, numbered EO 2 to EO 6 (1 was the Class E battery electric loco built in 1922.)

They were later reclassified EO to avoid confusion with the EC class locomotives. 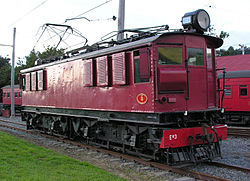 Another view of EO 3

There were replaced in April 1968 by the EA class locomotives. The EA class were later redesignated as EO class (of 1968).

EO3 was preserved at the Ferrymead Railway. There is also a scale model of EO3 in Nelson, New Zealand. It is 7 1/4 inch gauge, and is capable of pulling about six passengers with the driver.