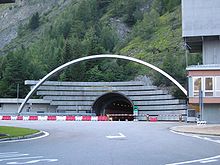 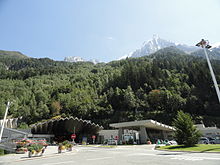 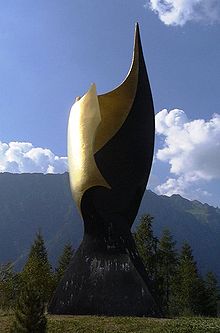 Sculpture in France at the tunnel's northwestern exit.

Plans to widen the tunnel were never implemented because of lack of financing and fierce opposition of local residents who objected to the harmful effects of increased heavy traffic.

The Mont Blanc Tunnel was originally managed by two public companies, each managing half of the tunnel:

After the 1999 fire, which showed how lack of coordination could hamper the safety of the tunnel, all the operations are managed by a single entity: MBT-EEIG, controlled by both ATMB and SITMB together, through a 50–50 shares distribution.[2]

A commemorative plaque on the French side of the tunnel remembering those who were killed in the fire.

On the morning of Wednesday, 24 March 1999, 39 people died[4] when a Belgian transport truck carrying flour and margarine caught fire in the tunnel.[1] After several km, the driver realized something was wrong as cars coming in the opposite direction flashed their headlights at him; a glance in his mirrors showed white smoke coming out from under his cab. This was not yet a fire emergency; there had been 16 other truck fires in the tunnel over the previous 35 years, always extinguished on the spot by the drivers.

At 10:53 CET, the driver of the vehicle, Gilbert Degrave, stopped in the middle of the tunnel to attempt to fight the fire but he was suddenly forced back by flames erupting from his cab.[1]

At 10:55, the tunnel employees triggered the fire alarm and stopped any further traffic from entering. At this point the tunnel was populated by at least 10 cars/vans and 18 trucks that had entered from the French side. A few vehicles from the Italian side passed the Volvo truck without stopping. Some of the cars from the French side managed to turn around in the narrow 2-lane tunnel to retreat back to France, but negotiating the road in the dense smoke that had rapidly filled the tunnel quickly made this impossible. The larger trucks didn't have the space to turn around, and reversing out wasn't an option.

Most drivers rolled up their windows and waited for rescue. The ventilation system in the tunnel drove toxic smoke back down the tunnel faster than anyone could run to safety. These fumes quickly filled the tunnel and caused vehicle engines to stall; they needed oxygen to run. Many drivers near the blaze who attempted to leave their cars and seek refuge points were quickly overcome.

Within minutes, two fire trucks from Chamonix responded to the unfolding disaster. The fire had melted the wiring and plunged the tunnel into darkness; in the smoke and with abandoned and wrecked vehicles blocking their path, the large fire engines were unable to proceed. The fire crews instead abandoned their vehicles and took refuge in two of the emergency fire cubicles (fire-door sealed small rooms set into the walls every 600 metres). As they huddled behind the fire doors, they could hear burning fuel roll down the road surface, causing tires to pop and fuel tanks to explode. They were rescued five hours later by a third fire crew that responded and reached them via a ventilation duct; of the 15 firefighters that had been trapped, 14 were in serious condition and one (their commanding officer) died in the hospital.

Some victims escaped to the fire cubicles. The original fire doors on the cubicles were rated to survive for two hours. Some had been upgraded in the 34 years since the tunnel was built to survive for four hours. However, the fire burned for 53 hours and reached temperatures of 1,000 °C (1,832 °F) mainly because of the margarine load in the trailer, equivalent to a 23,000-litre (5,100 imp gal; 6,100 US gal) oil tanker, which spread to other cargo vehicles nearby that also carried combustible loads. Slowly, everything became part of the inferno. It trapped around 40 vehicles in dense and poisonous smoke (containing carbon monoxide and cyanide). Due to weather conditions at the time, airflow through the tunnel was from the Italian side to the French side.[5] Authorities compounded the effect by pumping in further fresh air from the Italian side, forcing poisonous black smoke through the length of the tunnel. Only vehicles below the inferno on the French side of the tunnel were trapped, while cars on the Italian side of the fire were mostly unaffected. 27 people died in their vehicles. 10 died trying to escape on foot. Of the initial 50 people trapped by the fire, 12 survived.[1] It would be over five days before the tunnel cooled sufficiently for anyone to go back in, to start repairs.

Pierlucio Tinazzi, an Italian security guard employed by the SITMB, is credited with saving at least 10 of the 12 survivors.[1] Another source credits him with helping all 12.[citation needed] Tinazzi died while helping victims of the fire. His job was to ride up and down the tunnel to see that everything was running smoothly. He was on the French side at the time emergency services had given up. He donned breathing equipment and rode into the tunnel on his BMW K75 motorcycle. He was in radio contact with the Italian side for over an hour before succumbing to the intense heat. His motorcycle melted into the pavement after he dragged an unconscious truck driver behind a fire door. A commemorative plaque at the Italian entrance honors his heroism.[6] 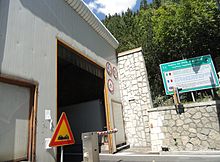 Thermographic inspection station on the Italian side

The tunnel underwent major changes in the three years it remained closed after the fire. Renovations include computerised detection equipment, extra security bays, a parallel escape shaft and a fire station in the middle of the tunnel complete with double cabbed fire trucks. The safety shafts also have clean oxygen flowing through them via air vents. Any people in the security bays now have video contact with the control centre, so they can communicate with the people trapped inside and inform them about what is happening in the tunnel more clearly.

A remote site for cargo safety inspection was created on each side: Aosta (I) and Passy-Le Fayet (F). Here all trucks are inspected well before the tunnel entrance. The same areas are also used as staging areas, to smooth the peaks of commercial traffic.

The experience gained from the investigation into the fire was one of the principal factors that led to the creation of the French Land Transport Accident Investigation Bureau (Bureau d'Enquêtes sur les Accidents de Transport Terrestre).[7]

In Grenoble, France, 16 people and companies were tried on 31 January 2005 for manslaughter. Defendants in the trial included:

The cause of the fire is disputed. Different accounts report it to be a cigarette stub carelessly thrown at the truck, and it supposedly entered the engine induction snorkel above the cab, setting the paper air filter on fire, a mechanical or electrical fault, or poor maintenance of the truck's engine. The closest smoke detector was out of order and French emergency services do not use the same radio frequency as those inside the tunnel. The Italian company responsible for operating the tunnel, SITMB, paid €13.5 million ($17.5 million US) to a fund for the families of the victims. Édouard Balladur, former president of the French company operating the tunnel (from 1968 to 1980), then later Prime Minister of France, was heard as a witness. He was asked about the security measures that he took or failed to take. Balladur claimed that a lot was prevented by the division of the tunnel into two sections operated by two companies (one in France, the other in Italy) which did not take a concerted approach. On 27 July 2005, thirteen defendants were found guilty, and handed sentences ranging from fines to suspended prison sentences, to 6 months in jail.