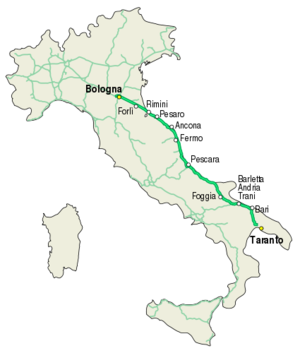 notes=The Autostrada A14, or Autostrada Adriatica, is a motorway which connects to . For most of its route if follows the coast of the Italian peninsula. Though it consists of three lanes in places to the north, it is a two lane route, with many climbs, descents, tunnels and bridges, for most of its 743.4 km length.

Inaugurated in 1965, under the management of "Autostrade per l'Italia", it has been a major holiday route serving the larger coastal towns of the (, , , ) and further south in , , and .

The first part of the A14 which was opened included the Bologna bypass and the connection to the A1 Motorway (the so-called "autostrada del sole"). In 1969 the route reached Ancona, and the approximately 50 km section from to was also opened. In 1973 the motorway was completed from to (absorbing parts of the A17 near Bari) and the spur for was also finished. The extension towards finally opened in 1975.