Mont Blanc
This article is about the mountain. For other uses, see Mont Blanc (disambiguation).
See also: Mont Blanc massif

Mont Blanc (French) or Monte Bianco (Italian), meaning "White Mountain", is the highest mountain in the Alps, Western Europe and the European Union.[1] It rises 4,810.45 m (15,782 ft)[2] above sea level and is ranked 11th in the world in topographic prominence. It is also sometimes known as La Dame blanche (French for "the White Lady") or Il Bianco (Italian for "the White One").

The mountain lies between the regions of Aosta Valley, Italy, and Haute-Savoie, France and the location of the summit is on the watershed line between the valleys of Ferret and Veny in Italy and the Arve Valley in France.

The two most famous towns near Mont Blanc are Courmayeur in Aosta Valley, Italy, and Chamonix in Haute-Savoie, France—the site of the first Winter Olympics. A cable car ascends and crosses the mountain from Courmayeur to Chamonix.

Begun in 1957 and completed in 1965, the 11.6 km (7¼ mi) Mont Blanc Tunnel runs beneath the mountain between these two countries and is one of the major trans-Alpine transport routes.

The Mont Blanc massif is popular for mountaineering, hiking, skiing and snowboarding. 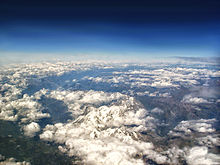 Aerial view of the south-western side of Mont Blanc in early September, taken on a commercial flight.

Aerial view of the south-eastern side of Mont Blanc, taken on a commercial flight

The first recorded ascent of Mont Blanc was on 8 August 1786 by Jacques Balmat and the doctor Michel Paccard. This climb, initiated by Horace-Bénédict de Saussure, who gave a reward for the successful ascent, traditionally marks the start of modern mountaineering.[3] The first woman to reach the summit was Marie Paradis in 1808.

Now the summit is ascended by an average 20,000 mountaineer-tourists each year and could be considered an easy, yet long, ascent for someone who is well trained and used to the altitude. This impression is reinforced by the fact that from l'Aiguille du Midi (where the cable car stops), Mont Blanc seems quite close, being merely 1,000 m (3,300 ft) higher. Whilst seeming deceptively close, La Voie des 3 Monts route (known to be more technical and challenging than other more commonly used routes) requires much ascent and descent before the final section of the climb is reached and the last 1000m push to the summit is undertaken.

However, every year the Mont Blanc massif takes many victims, and in peak weekends (normally around August) the local rescue service flies an average of 12 missions, mostly directed towards people in trouble on one of the normal routes of the mountain. There are courses that require knowledge of high-altitude mountaineering, a guide (or at least a veteran mountaineer), and proper equipment. It is a long course that includes delicate passages and the hazard of rock slides. Also, at least one night at the refuge is required to acclimatize to the altitude (the summit is almost 5 km (3.1 mi) above sea level); less could lead to altitude sickness and possible death.[4][5] 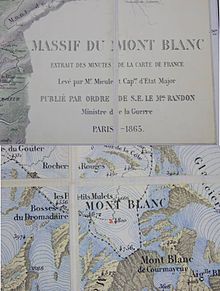 Map of the border in the Mont Blanc made by the captain Mieulet in 1865. Italian historians call this map "an historical falsehood".[6]

Ownership of the summit 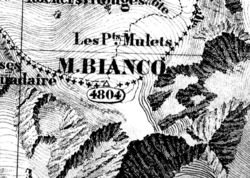 Map from the Sardinian Atlas in 1869 (measured in 1856 before the convention of 7 March 1861) and identical to that attached to the Treaty of Turin. Doc. IGN. As the map shows the summit lies two thirds in Italy and only one third in France

Since the French Revolution the issue of the ownership of the summit has spurred many debates. Previously, the entire mountain had formed part of the Kingdom of Sardinia, one of the pre-unitarian Italian states [7]. Defeated several times by Napoleon, the King of Sardinia, with the Treaty of Paris of May 15, 1796, was forced to cede Savoy and Nice to France. In article 4 of this treaty it says: "The border between the Sardinian kingdom and the departments of the French Republic will be established on a line determined by the most advanced points on the Piedmont side, of the summits, peaks of mountains and other locations subsequently mentioned, as well as the intermediary peaks, knowing: starting from the point where the borders of Faucigny, the Duchy of Aoust and the Valais, to the extremity of the glaciers or the Monts-Maudits: first the peaks or plateaus of the Alps, to the rising edge of the Col-Mayor". This act is even more confusing, because it states that the border should be visible from the town of Chamonix and Courmayeur. The summit is not visible from Courmayeur, because part of the mountain lower down obscures it. After Napoleonic Wars and French occupation, with the Congress of Vienna the King of Sardinia was restored in Savoy, Nice and Piedmont, his traditional territories. Already inaccurate at the time the Treaty of Paris was no longer valid. Forty-five years later, after the Austro-Sardinian War, it was replaced by a new legal act. This act was signed in Turin on 24 March 1860 by Napoleon III and Victor Emmanuel II of Savoy, and deals with the annexation of Savoy. For the first time, with the consent of the king of Sardinia, the Mont Blanc is located in the French borders. A demarcation agreement, signed on 7 March 1861, defines the "new border". Currently this act and the maps attached is still legally valid both for the French Government that the Italian one [8]. One of the prints from the Sarde Atlas,[9] made in 1823 and positions the border exactly on the summit edge of the mountain (and measures it to be 4,804 m (15,761 ft) high). The convention of 7 March 1861 recognises this through an attached map, taking into consideration the limits of the massif, and drawing the border on the icecap of the Mont Blanc, and therefore makes it both French and Italian. Watershed analysis of modern topographic mapping not only places the main summit on the border, but also suggests that the border should follow a line northwards from the main summit towards Mont Maudit, leaving the south east ridge to Mont Blanc de Courmayeur wholly within Italy. Despite the fact that the Franco-Italian border was redefined in both 1947 and 1963, the commission made up of both Italians and French ignored the Mont Blanc issue.

The first real scientific investigations on the summit were conducted by the botanist-meteorologist Joseph Vallot at the end of the 19th century. He wanted to stay near the top of the summit, so he had to build his own permanent cabin.

In 1891, Pierre Janssen, a scientific academic, envisaged the construction of an observatory at the summit of Mont Blanc. Gustave Eiffel agreed to take on the project, provided he could find strong foundations. The Swiss surveyor Imfeld dug down 15 m (49 ft) but found nothing solid, so Eiffel gave up.

Despite this, the observatory was built in 1893. During the cold wave of January 1893 a temperature of −43 °C (−45 °F) was recorded on Mont Blanc, being the lowest ever recorded there.

Levers attached to the ice supported the observatory. This worked to some extent until 1906, when the building started leaning heavily. The movement of the levers corrected the lean slightly, but three years later (two years after Janssen’s death) a crevasse started opening under the observatory and it was abandoned. Eventually the building fell, and only the tower could be saved in extremis.

The mountain was the scene of two fatal air crashes of Air India Flight 245 in 1950 [10] and Air India Flight 101 in 1966. Both planes were approaching Geneva airport and the pilots miscalculated their descent; 48 and 117 people, respectively, died.[11] 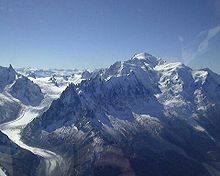 The Mer de Glace glacier can be seen on the left side of the image.

The summit of Mont Blanc is a thick, perennial ice and snow dome whose thickness varies, so no exact and permanent summit elevation can be determined. But accurate measurements have been made. For a long time its official elevation was 4,807 m (15,771 ft). Then in 2002, the IGN and expert surveyors, with the aid of GPS technology, measured it to be 4,810.40 m (15,782 ft 2 in).

Mont Blanc seen in the afternoon from the Rébuffat platform

After the 2003 heatwave in Europe, a team of scientists re-measured the height on 6 and 7 September. The team was made up of the glaciologist Luc Moreau, two surveyors from the GPS Company, three people from the IGN, seven expert surveyors, four mountain guides from Chamonix and Saint-Gervais and four students from various institutes in France. This team noted that the elevation was 4,808.45 m (15,775 ft 9 in), and the peak was 75 centimetres (30 in) away from where it had been in 2002.

After these results were published, more than 500 points were measured, to assess the effects of climate change, and the fluctuations in the height of the mountain at different points. From then on the elevation of the mountain has been measured every two years.

The interpretation that the heatwave had caused this fluctuation is disputed, because the heatwave is known not to have significantly affected the glaciers above 4,000 m (13,000 ft). The height and position of the summit could have been moved by general glacial forces. At this elevation, the temperatures rarely rise above 0 °C (32 °F). During the summer of 2003, the temperature rose to 2 °C (36 °F), and even 3 °C (37 °F), but this would not have been enough for the ice, which stayed at −15 °C (5 °F), to melt.

Blanc Massif averages nearly 100 fatalities a year with published estimate of 6000-8000 alpinist fatalities in total. (The High Mountains of the Alps, Dumler, 1994). There are several classic climbing routes to the summit of Mont Blanc:[13]

From the summit of Mont Blanc on a clear day, the Jura, the Vosges, the Black Forest and the Massif Central mountain ranges can be seen, as well as the principal summits of the Alps. 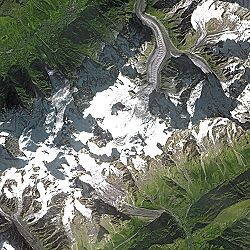 The Mont Blanc massif is being put forward as a potential World Heritage Site because of its uniqueness and its cultural importance, considered the birthplace and symbol of modern mountaineering.[18] It would require the three governments of Italy, France and Switzerland to make a request to UNESCO for it to be listed.

Mont Blanc is one of the most visited tourist destinations in the world, and for this reason, some view it as threatened[citation needed]. Pro-Mont Blanc (an international collective of associations for the protection of Mont Blanc) published in 2002 the book Le versant noir du mont Blanc (The black hillside of Mont Blanc), which exposes current and future problems in conserving the site.[19]

In 2007, Europe's highest outhouses (two) were helicoptered to the top of France's Mont Blanc at a height of 4,260 metres (13,976 feet). The dunny-cans are emptied by helicopter. The facilities will service 30,000 skiers and hikers annually; thus helping to alleviate the deposit of urine and feces that spread down the mountain face with the spring thaw, and turned it into 'Mont Noir'.[20]