The base lies between the two largest windward O'ahu communities of Kailua and Kāne'ohe and the main gate is reached at the eastern end of Interstate H-3. The main access to the base is by either H-3 or by Mokapu Road. MCB Hawaii is located on the windward side of Oahu, approximately 12 miles (19 km) northeast of Honolulu. Marine Corps Base Hawaii, occupies the entire Mokapu Peninsula, of 2,951 acres (11.94 km2). Two areas of the base are classified conservation land which includes the Ulupau Crater area (north east peninsula) and the Nuupia Pond area (at the Mokapu Road). 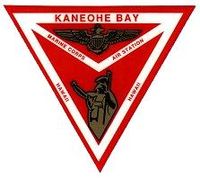 In 1918, President Woodrow Wilson designated 322 acres (1.30 km2) of land on Mokapu Peninsula for the military. The Kuwaahoe Military Reservation, became known later, in 1942 as “Fort Hase”. In 1941, Army artillery units moved into the area. In 1939, the Navy constructed a small seaplane base and upon its completion, Naval Air Station Kaneohe Bay's role was expanded to include the administration of the Kaneohe Bay Naval Defense Sea Area. 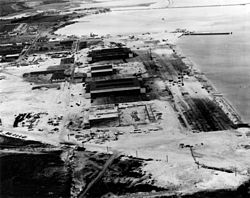 On December 7, 1941, Naval Air Station Kaneohe Bay was attacked approximately 9 minutes prior to the attack on Pearl Harbor.

The base is less than a mile north of Plantation Estate where Barack Obama has set up his Winter White House during Christmas break visits in 2008, 2009 and 2010. During his visits Obama works out at the base and attends various dinners.

A panoramic view of Marine Corps Base Hawaii taken from the top of K-T. 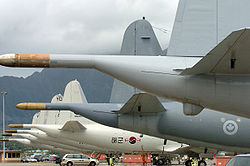 There were 2,332 households out of which 66.7% have children under the age of 18 living with them, 93.0% were married couples living together, 3.7% have a female householder with no husband present, and 2.1% were non-families. 1.5% of all households were made up of individuals and none had someone living alone who was 65 years of age or older. The average household size was 3.21 and the average family size was 3.23.

Since 2004, MCBH has partnered with Ocean Power Technologies, Inc. to test the generation of electric power from ocean waves using a "PowerBuoy" wave energy converter, one of the first wave power projects in the U.S.[3]

Marine Corps Base Hawaii, under current commanding officer Col. Robert Rice, has stopped using plastic shopping bags aboard the installation, installed solar water heaters on all base housing units, and on Dec. 8, 2010, will debut a "Net Zero" sustainable energy home which uses solar power. The base fleet of government vehicles is also being changed over to hybrid and electric vehicles and most other "FlexFuel" vehicles now operate on E85 ethanol-based fuel. MCB Hawaii installed the first E85 pump in the state of Hawaii in November 2010, which is also the first US military installation in the world to do so.