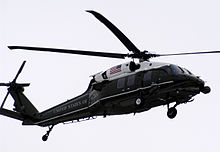 Marine One is the call sign of any United States Marine Corps aircraft carrying the President of the United States.[1] It usually denotes a helicopter operated by the HMX-1 "Nighthawks" squadron, either the large VH-3D Sea King or the newer, smaller VH-60N "WhiteHawk", both due to be replaced by the VXX program. A Marine Corps aircraft carrying the Vice President has the call sign Marine Two. 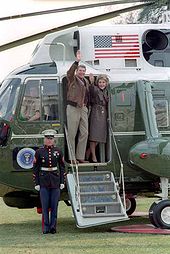 The first use of helicopters for presidential transport was in 1957, when President Dwight D. Eisenhower traveled on a Bell UH-13J Sioux. The president needed a quick way to reach his summer home in Rhode Island. Air Force One was too large for such short trips, while traffic would be disrupted by traveling in a motorcade. Eisenhower instructed his staff to look into alternative modes of transportation and a Sikorsky UH-34 Seahorse helicopter was commissioned.[2] The early aircraft lacked the "creature comforts" found on its modern successors, such as air conditioning and toilets.

In 1958, the H-13 was replaced by the Sikorsky H-34, and in 1961 by the VH-3A. Not long after the mode of presidential transport was introduced, presidential aides asked the Marines to look into the White House South Lawn as a helicopter landing zone.[2] Ample room was present, and the protocol was established.[2]

Until 1976, the Marine Corps shared the responsibility of helicopter transportation for the president with the United States Army. Army helicopters used the call sign Army One while the president was on board. The VH-3D replaced some VH-3As in 1978, and the remaining VH-3As were replaced by the VH-60N beginning in 1989.

The current VH-3 helicopters used by HMX-1 are aging and in 2002 the VXX competition was started to find a replacement. The helicopter selected was the Lockheed Martin VH-71 Kestrel, a derivative of the AgustaWestland AW101. In April 2009, the VH-71 program was cancelled due to cost overruns.[3][4][5] In February 2010, the Navy issued a request for information to the aviation industry. Responses will be used to restart the VXX contest.[6][7][8][9]

On July 16, 2009, Marine One flew with an all-female crew for the first time, as the final flight of the first female to fly the president: Major Jennifer Grieves.[10] To date, Marine One has never had any kind of anomalous accident or terrorist attack.[11]

Marine One is sometimes the preferred alternative to motorcades, which can be expensive and logistically difficult. The controlled environment of a helicopter adds greatly to the safety factor as well. It is also used to transport senior Cabinet staff and foreign dignitaries.

More than 800 Marines supervise the operation of the Marine One fleet, which is based in Quantico, Virginia, but is more often seen in action on the South Lawn of the White House or at Joint Base Andrews Naval Air Facility in Maryland. At Andrews, it is sometimes used to connect to Air Force One for longer journeys. Wherever Marine One flies, it is met on the ground by at least one Marine in full dress uniform (most often two with one acting as an armed guard). According to a story told by Bruce Babbitt, President Clinton, in his final days of office, while flying over and landing in a remote area near the Grand Canyon, found a Marine waiting on the rock ready to salute him.[12] Marine aviators flying Marine One do not wear regular flight suits during flights, but rather the Marine Blue Dress Charlie/Delta uniform.

As a security measure, Marine One always flies in a group with identical helicopters, sometimes as many as five. One helicopter carries the President, while the others serve as decoys for would-be assassins on the ground. Upon take-off these helicopters begin to shift in formation (sometimes referred to as a presidential shell game) regularly to obscure the location of the President. Marine One is also equipped with standard military anti-missile countermeasures such as flares to counter heat-seeking missiles and chaff to counter radar-guided missiles, as well as AN/ALQ-144A infrared countermeasures.[13] To add to the security of Marine One, every member of HMX-1 is required to pass a Yankee White background check before touching any of the helicopters used for presidential travel.[14]

Marine One is always transported (as is the president's limousine) wherever the president travels, within the U.S. as well as overseas.[15] At a presidential inauguration, the Marines offer a flight to the outgoing president from the Capitol to Andrews Air Force Base.