The U.S. Army Coast Artillery Corps (CAC) was a Corps level organization responsible for coastal and harbor defense of the United States between 1901 and 1950.

As early as 1882 the need for heavy fixed artillery for seacoast defense was noted in Chester A. Arthur's Second Annual Message to Congress where he noted:

"I call your attention to the recommendation of the Secretary and the board that authority be given to construct two more cruisers of smaller dimensions and one fleet dispatch vessel, and that appropriations be made for high-power rifled cannon for the torpedo service and for other harbor defenses."[2]

The coast artillery became responsible for the installation and operation of the controlled mine fields that were planted to be under observation, fired electrically and protected by fixed guns.[3] With that responsibility the Corps began to acquire the vessels required to plant and maintain the mine fields and cables connecting the mines to the mine casemate ashore organized as a "Submarine Mine Battery" within the installation command.[3] The larger vessels, Mine Planters, were civilian crewed until the creation of the U.S. Army Mine Planter Service (AMPS) and Warrant Officer Corps to provide officers and engineers for the ships designated as Mine Planters.[4][5] The mine component was considered to be among the principal armament of coastal defense works.[5]

Taft Board and creation of the CAC 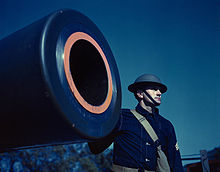 In 1905, after the experiences of the Spanish-American War, President Theodore Roosevelt appointed a new board, under Secretary of War William Howard Taft. They updated some standards and reviewed the progress on the Endicott board's program. Most of the changes recommended by this board were technical; such as adding more searchlights, electrification (lighting, communications, and projectile handling), and more sophisticated optical aiming techniques. The board also recommended fortifications in territories acquired from Spain: Cuba and the Philippines, as well as Hawaii, and a few other sites. Defenses in Panama were authorized by the Spooner Act of 1902. The Taft program fortifications differed slightly in battery construction and had fewer numbers of guns at a given location than those of the Endicott program. By the beginning of World War I, the United States had a coastal defense system that was equal to any other nation.

By the end of the Second World War such fixed coastal defenses were obsolete and the artillery branches were merged back together in 1950[3] with some of the Mine Planter vessels being transferred to Navy and designated Auxiliary Minelayer (ACM / MMA).

In 1901, the regimental organization of the US Army artillery was abolished, more companies were added, and given numerical designations.

In WWII more expansion and reorganization to the Battalion/Brigade system. more than 900 units created with the following titles-