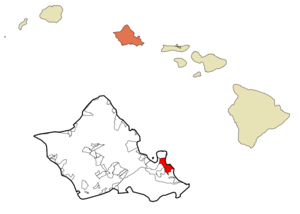 mapsize = 250px
map_caption = Location in Honolulu County and the state of

Kailua is a (CDP) in Honolulu County, , . It lies in the Kookinaolaupoko District of Ookinaahu on the coast at Kailua Bay. It is in the judicial district and the named Ko'olaupoko. It is convert|12|mi|km northeast of Honolulu - over Nu'uanu Pali, the tallest mountain peak in the . The population was 36,513 at the 2000 census.

In the Kailua means "two seas," or "two currents," a contraction of the words kai (meaning sea or sea water) and okinaelua (meaning two); it is so named because of the two s in the district or the two currents which run through Kailua Bay.

Kailua is primarily a residential community, with a centralized commercial district along Kailua Road. It has a compact, easy-to-shop surrounded by mostly single-family homes. By 1992, 50,000 residents encompassed a central urban core with surrounding residential areas. [ [http://www.visitkailua.com/index.php?page_id=26 Kailua Chamber of Commerce ] ]

Places of note in Kailua include Kailua Beach Park (photo at right), , , and Marine Corps Base Hawaiokinai.

It is possible that Kailua was home to Hawaiian families at least 1,500 years ago. The earliest settlers are thought to have lived, fished, and played on the slopes surrounding Ka'wainui Marsh. A report on archaeological excavations of the marshland concluded that when the marsh slopes were first occupied about , agriculture was not possible. [ [http://www.hawaiistateinfo.com/kailua.php Kailua ] ] Early Hawaiian occupants of Kailua apparently lived beside a or bay open to the sea, hundreds of yards shoreside of today's shoreline.

In the , Kailua attracted the . During the reign of King and his successors, , , , and ; Kailua replace as the residential seat of the Many legends were born, including the , who were known for working at night in Kaiwainui Marsh, and mo'o, who took the shape of a large lizard that attracted fish.

Kailua was densely populated before the arrival of , and was the ancient capital of Oahu's kings. The biggest event in Kailua and the entire Windward side was in 1795 when conquered O'ahu in his quest to unite the Hawaiian Islands. The King granted Kaiwainui Marsh and old Kailua, which included large freshwater s and saltwater ponds at Mokapu, to warriors and chiefs who had helped him. The land was used in various forms for agriculture (e.g., , rice, and ), and eventually was used primarily for cattle raising. Many ancient temple ruins, including Ulu Po Heiau State Monument, are in the area. [http://72.14.209.104/search?q=cache:8UXyGLeK_LwJ:www.factmonster.com/ce6/us/A0826885.html+kailua+hawaii+history+oahu&hl=en&gl=us&ct=clnk&cd=5&lr=lang_en]

Kailua was a small town of barely 3,000 in the 1940s. However, the events of changed the appearance of Kailua. Kaneohe Ranch sold portions of land to the government for expansion of the Navy base (now ) and the Army's Fort Hase. Finally, in 1942, Kaneohe Ranch closed down its cattle-raising operations entirely, freeing thousands of acres for post-war development. Harold K.L. Castle, owner of Kaneohe Ranch, donated the land for churches, schools, and a new hospital.

In 1946, a small Liberty House (now Macy's) shop opened with three employees and upgraded to a full-line in 1953, with nearly 50 employees. The first bowling alley, a branch office of the telephone company, and the very first supermarket in Hawaii opened in Kailua in . A new 4-lane highway, tunneling through the Ko'olau Mountains, was completed in the late . By the end of the 1950s, Hawaii had become a state and Kailua became the official postal designation (previously known as ). By 1960 the population was up to 24,400. Castle Hospital (now Castle Medical Center) opened in 1963. Craig's Bakery was also a well recognized bakery that opened in the late 1950's and finally closed soon after the September 11th terrorist attacks in 2001. [ [http://starbulletin.com/2001/12/10/news/story5.html Honolulu Star-Bulletin Hawaii News ] ]

Kailua Beach has been repeatedly ranked among the [http://world-discoverer.com/eng/top10beaches.asp best beaches worldwide] . It was ranked as #1 beach in 1998 by coastal expert Dr. Stephen Leatherman, and then "retired" from subsequent consideration. [ [http://www.drbeach.org/drbeach/best_beach_list.htm DrBeach.Org ] ]

It is a crescent-shaped, about convert|2|mi|km in length and 50-150 feet wide. The ocean bottom fronting the beach slopes gently to overhead depths without any coral heads. Light to medium waves support surfing and body surfing.

The steady s make Kailua Beach one of the world’s preeminent and destinations. Robbie Naish, regarded by most observers as the windsurfing's greatest champion, grew up at Kailua Beach. [ [http://oahu.aloha-hawaii.com/hawaii/kailua,+oahu/ Aloha-Hawaii.com: Kailua, Oahu ] ]

Lanikai is an unincorporated community in Kailua on the windward coast at Kailua Bay. was rated as one of the top ten beaches in the world by Sherman's Travel Magazine. [ [http://www.msnbc.msn.com/id/10300597/ MSNBC] ] It is served by Kailua's zip code 96734.

Kailua has various events throughout the year, from block parties to fireworks. [ [http://www.visitkailua.com/index.php?page_id=14 Kailua Chamber of Commerce ] ]