Jefferson County is a county located in the U.S. state of Kentucky. It is the most populous county in Kentucky and is more than twice as populous as the second most populous, Fayette. It was formed in 1780. The population was 741,096 in the 2010 Census. 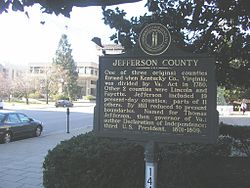 In 2003, its government merged with that of its largest city and county seat, Louisville, forming a new entity, the Louisville-Jefferson County Metro Government (the official long form) or simply Louisville Metro (the official short form).

Prior to this merger, the head of local government was the County Judge/Executive, a post that still exists but now has few powers. The current incumbent is Ken Herndon. Local government is effectively now led by the Mayor of Louisville Metro, Greg Fischer. 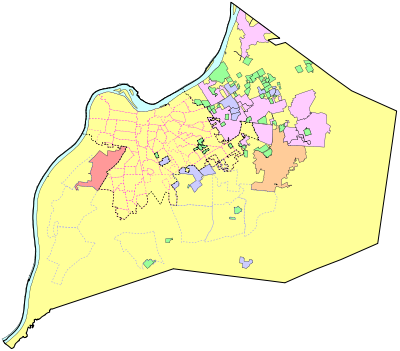 † formerly a Census-designated Place in the county, however, in 2003, these places became neighborhoods within the city limits of Louisville Metro.