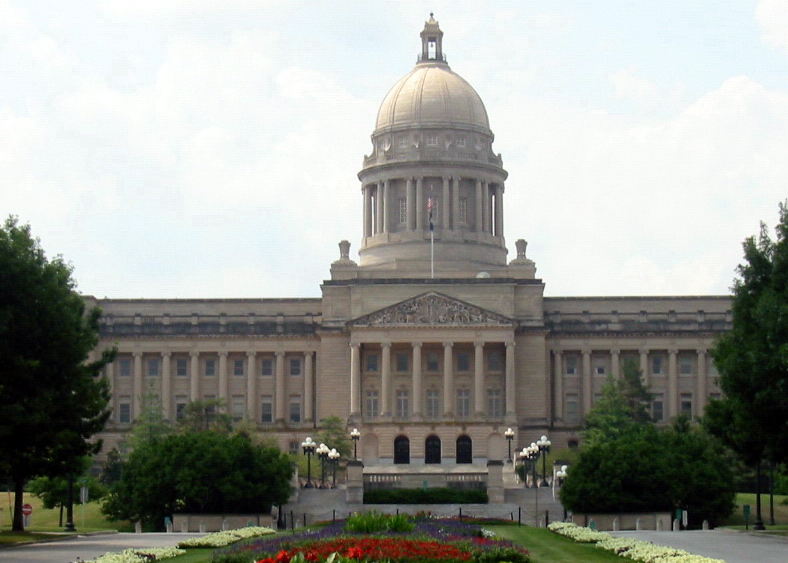 Frankfort is a city in the U.S. commonwealth of that serves as the state and the of Franklin County.GR|6 The population was 27,741 at the 2000 census; by population, it is the 5th smallest state capital in the United States.

Frankfort is the principal city of the Frankfort Micropolitan Statistical Area, which includes all of Franklin and Anderson counties.

In 1786 purchased the convert|260|acre|km2|sing=on tract of land on the north side of the Kentucky River that is now downtown Frankfort. He was an early promoter to make Frankfort the country's capital. Wilkinson is called by some the father of Frankfort.

The town of Frankfort probably received its name from an event that took place in 1780s when Indians attacked a group of pioneers from Bryan’s Station who were making salt at a ford in the Kentucky River. One of the pioneers, Stephen Frank, was killed and the crossing became known as “Frank’s Ford.” Later this name was shortened to Frankfort.

After Kentucky became a state, five commissioners were appointed on , , to choose a location for the state capital. They were John Allen and John Edwards (both from Bourbon County), Henry Lee (Mason County), Thomas Kennedy (Madison County), and Robert Todd (Fayette County). A number of communities competed for this honor, but Frankfort won by perseverance and, according to early histories, the offer of Andrew Holmes' log house as capitol for seven years, a number of town lots, £50 worth of locks and hinges, 10 boxes of glass, 1,500 pounds of nails, and $3,000 in gold. [ [http://kentucky.gov/kyhs/hmdb/MarkerSearch.aspx?mode=Subject&subject=134 Kentucky Historical Society website, Kentucky Historical Marker number 1774] ]

John Brown, a Virginia lawyer and statesman, built a home, now called Liberty Hall, in Frankfort in 1796. Before statehood he represented Virginia in the (1777&ndash;78) and the (1789&ndash;91). While in Congress he introduced the bill granting statehood to Kentucky. Once that was accomplished, he was elected a for Kentucky.

The appropriated funds to provide a house to accommodate the governor in 1796. Construction was completed in 1798. The Old Governor's Mansion is reputed to be the oldest official executive residence still in use in the United States.

In 1829 the Old Capitol, the third Capitol of Kentucky, was built in the style by . The building served the Commonwealth as its Capitol from 1830 until 1910.

During the fortifications overlooking downtown Frankfort were built on what is now called . The occupied Frankfort for a short time.

On , Governor-elect was assassinated in Frankfort while walking to the capitol to be inaugurated. Former Secretary of State was later found guilty in a conspiracy to kill Goebel.

The city has seen considerable growth since the 1960s. A modern addition to the State Office Building was completed in 1967. The original building was completed in the 1930s on the location of the former Kentucky State Penitentiary. Some of the stone from the old prison was used for the walls surrounding the office building. Capitol Plaza was established in the 1960s. The Plaza consists of the Capitol Plaza Office Tower, the Capitol Plaza Hotel (formerly the Holiday Inn, Frankfort), and the Fountain Place Shoppes. The Capital Plaza Office Tower opened in approximately 1968. In August 2008, officials revealed a plan to demolish the Capital Plaza Office Tower and redevelop the area over a period of years, replacing the Tower with a smaller, four- or five-story building. [http://www.kentucky.com/211/story/481397.html]

Frankfort is home to several major of Kentucky Bourbon , including (formerly ).

*Church of the Ascension, Episcopal Church was organized in 1835 and is located at 311 Washington Street in the heart of Frankfort’s historic district and is on the . [http://www.diolex.net/ascension-frankfort/]

*Old Good Shepherd Church was built in 1850 and is located at 310 Wapping Street in the heart of Frankfort’s historic district and is on the .

The city is bisected by the , which makes an s-turn as it passes through the center of town. The river valley widens at this point, which creates four distinct parts of town. The valley within the city limits contains "downtown" and "south" Frankfort districts, which lie opposite one another on the river. A small neighborhood with its own distinct identity, Bellepoint, is located on the west bank of the river to the north of Benson Creek, opposite the river from the "downtown" district. The suburban areas on either side of the valley are referred to as "west" Frankfort and "east" Frankfort, respectively.

Frankfort does not have a commercial airport and all travelers should either fly into (Lexington) or .

Frankfort is located at the northern extreme limit of the of the Southeastern United States. It is proximal to the climatic transition zone where the subtropical Southeast blends with and then eventually changes to a further north (roughly just beyond and ).

Frankfort is the focal point of a micropolitan statistical area consisting of Frankfort and Franklin County as well as adjacent Lawrenceburg and Anderson County. The city has also achieved classification into a with Lexington and Richmond to the east.

Frankfort is the home of the , a historically black university situated near the downtown area. Two s serve the city, with a total of three public high schools located within the city limits: