Châteauneuf-du-Pape is a French wine Appellation d'origine contrôlée (AOC) located around the village of Châteauneuf-du-Pape in the Rhône wine region in southeastern France. It is the most renowned appellation of the southern part of the Rhône Valley. Vineyards are located around Châteauneuf-du-Pape and in the neighboring villages Bédarrides, Courthézon and Sorgues between Avignon and Orange and covers slightly more than 3,200 hectares or 7,900 acres (32 km2). Over 110,000 hectolitres of wine a year are produced here.[1] More wine is made in this one area of southern Rhône than in the entirety of the northern Rhône region.[2]

The wine region of Châteauneuf-du-Pape is located within the Vaucluse department in southeastern France.

Châteauneuf-du-Pape roughly translates to "The Pope's new castle" and, indeed, the history of this appellation is firmly entwined with papal history. In 1308, Pope Clement V, former Archbishop of Bordeaux, relocated the papacy to the town of Avignon. Clement V and subsequent "Avignon Popes" were said to be great lovers of Burgundy wines and did much to promote it during the seventy-year duration of the Avignon Papacy. At the time, wine-growing around the town of Avignon was anything but illustrious. While the Avignon Papacy did much to advance the reputation of Burgundy wines, they were also promoting viticulture of the surrounding area, more specifically the area 5-10 km north of Avignon close to the banks of the Rhône River. Prior to the Avignon Papacy, viticulture of that area had been initiated and maintained by the Bishops of Avignon, largely for local consumption.

Clement V was succeeded by John XXII who, as well as Burgundy wine, regularly drank the wines from the vineyards to the north and did much to improve viticultural practices there. Under John XXII, the wines of this area came to be known as "Vin du Pape", this term later to become Châteauneuf-du-Pape. John XXII is also responsible for erecting the famous castle which stands as a symbol for the appellation.

In the 18th century, the wines were shipped under the name vin d'Avignon. Records from the early 19th century mention wines of the name Châteauneuf-du-Pape-Calcernier which seems to have been a lighter-style wine than the Châteauneuf-du-Pape of today. They seem to have increased in reputation within France until phylloxera hit in the early 1870s, which was earlier than most other French wine regions were affected.[3] Prior to World War I the bulk of Châteauneuf-du-Pape was sold to Burgundy as vin de médecine to be added to Burgundy wine to boost the strength and alcohol levels.[4] 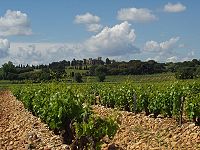 Vineyard with the Châteauneuf-du-Pape appellation borders, with vines trimmed as bushvines.

In the early 20th century, Châteauneuf-du-Pape was plagued by wine fraud; various rules for the production of Châteauneuf-du-Pape, drawn up and promulgated in 1923, were the first Appellation Contrôlée rules in France, and provided the prototype for subsequent AOC rules.[5] The original AOC rules allowed ten varieties, and were amended to thirteen in 1936,[3] and eighteen in 2009.[6] Baron Pierre le Roy of Château Fortia was the principal architect of these regulations, which set the minimum alcohol level of the wines and set limits on yields as well as which types of grapes could be grown in which area.[7] Another one of the Baron's requirements was that no vineyards could be planted on land that wasn't arid enough to support plantings of both lavender and thyme.[1] The producers of Châteauneuf-du-Pape have historically been known to be fiercely protective of their vineyard properties which is said to have led to the 1954 passing of a municipal decree in the village of Châteauneuf-du-Pape that banned the overhead flying, landing or taking off of flying saucers in the commune. As of 2007, this law has yet to be repealed.[4][8]

The appellation stretches from the eastern bank of the Rhône river near Orange in the north-west to Sorgues near Avignon in the south-east. The altitude reaches 120 meters at its highest and is in the northern part of the appellation. It covers 3200 hectares of land with at least three distinct types of soil or terroirs. In the north and north-east the famous galets roulés, round rocks or pebbles covering the clay soil. The rocks are famous for retaining the heat from the plentiful sun, some 2800 hours a year, releasing it at night, ripening the grapes faster than in the eastern part of the appellation, where the soil is mostly sand, as well as to the south where the soil is more gritty. The powerful mistral wind carries away the moisture, intensifying the dry climate.[9]

The characteristic terroir of Châteauneuf-du-Pape comes from a layer of stones called galets ("pebbles"). The rocks are typically quartzite and remnants of Alpine glaciers that have been smoothed over millennia by the Rhône River. The stone retains heat during the day and releases it at night which can have an effect of hastening the ripening of grapes. The stones can also serve as a protective layer to help retain moisture in the soil during the dry summer months.[7] Some of the most prestigious vineyards in the area, like Chateau Rayas, have more traditional looking vineyards without the galets. These are most often vineyards located on south-facing slopes where the night-time radiated heat from the stones would be detrimental to the vines and cause overripening of the grapes.[3]

La Crau is by far Chateauneuf-du-Pape's most famous lieu-dit or vineyard. The vineyard is owned primarily by Domaine du Vieux Télégraphe, one of the most classic Chateauneuf's, but also producer Henri Bonneau maintains a firm position here.[10] The vineyard is very rich in the aforementioned galets roulés, while Domaine du Vieux Lazaret with its over 100 ha owned by Vignobles Jérôme Quiot is the largest.

Vines of Châteauneuf-du-Pape growing in vineyards filled with galets and being trimmed to a bushwine shape.

Châteauneuf-du-Pape exists as red and white wine, with the large majority of the wines produced being red. The appellation rules do not allow rosé wines to be made under the Châteauneuf-du-Pape. The wines are normally packaged in distinctive, heavy dark wine bottles embossed with papal regalia and insignia.

Châteauneuf-du-Pape is traditionally cited as allowing thirteen grape varieties to be used, but the 2009 version of the AOC rules in fact list eighteen varieties, since blanc (white), rose (pink) and noir (black) versions of some grapes are now explicitly listed as separate varieties.[6] Also in the previous version of the appellation rules, Grenache and Picpoul were associated with different pruning regulations in their noir and blanc versions, bringing the number of varieties previously mentioned from thirteen to fifteen.[11][12][4]

With 72% of the total vineyard surface in 2004, Grenache Noir is very dominant, followed by Syrah at 10.5% and Mourvèdre at 7%, both of which have expanded in recent decades.[12] Cinsaut, Clairette, Grenache Blanc, Roussanne and Bourboulenc each cover 1-2.5%, and the remaining seven varieties each account for 0.5% or less.[12]

It is common to grow the vines as gobelets (bushvine), and this is the only vine training system allowed for the first four red varieties. Yields are restricted to two tons per acre.

In most red Châteauneuf-du-Pape, Grenache noir is the most common variety, although some producers use a higher proportion of Mourvèdre. Grenache produces a sweet juice that can have almost a jam-like consistency when very ripe. Syrah is typically blended to provide color and spice, while Mourvèdre can add elegance and structure to the wine.[7] Some estates produce varietal (100%) Grenache noir, while a few producers insist on using at least a token amount of all thirteen permitted varieties in their blend. The only estate to grow all thirteen varieties and use them consistently in a blend is Château de Beaucastel.[3]

Châteauneuf-du-Pape red wines are often described as earthy with gamy flavors that have hints of tar and leather.[4] The wines are considered tough and tannic in their youth but maintain their rich spiciness as they age.[1] The wines often exhibit aromas of dried herbs common in Provence under the name of garrigue. Châteauneuf-du-Pape dominated by Mourvèdre tend to be higher in tannin and requiring longer cellaring before being approachable.[3]

White Châteauneuf-du-Pape is produced by excluding the red varieties and only using the six permitted white varieties. The white varieties account for 7 percent of the total plantation according to 2004 statistics,[12] and a portion of the whites grapes are blended into red wines, which means that white wine production only accounts for around 5 percent of the total. In white Châteauneuf-du-Pape, Grenache blanc and Roussanne provides fruitiness and fatness to the blend while Bourboulenc, Clairette and Picpoul add acidity, floral and mineral notes. The style of these wines range from lean and minerally to oily and rich with a variety of aromas and flavor notes--including almond, star fruit, anise, fennel, honeysuckle and peach.[13] A single varietal, Roussanne, that is matured in an oak aging barrel, is also made by some estates. Most whites are made to be drunk young.[3] Some white Châteauneuf-du-Pape are meant to age and tend to develop exotic aromas and scents of orange peels after 7-8 years.[1] Rosé wines are not allowed within the appellation.

A bottle of red Châteauneuf-du-Pape wine. Most bottles are patterned, in this case with a mitre, but many other motifs of Papal regalia are used, such as the crossed keys.

Châteauneuf-du-Pape wines are often high in alcohol, typically 13-15%, and must be minimum 12.5% under the appellation rules with no chaptalization allowed. Winemaking in the region tends to focus on balancing the high sugar levels in the grape with the tannins, and phenols that are common in red Châteauneuf-du-Pape. Following harvest, the grape clusters are rarely destemmed prior to fermentation. The fermentation temperatures are kept high, with the skins being frequently pumped over and punched down for the benefit of tannin levels and color extraction to get that characteristic dark Châteauneuf color. Beginning in the 1970s, market tendencies to prefer lighter, fruitier wines that can be drunk sooner have prompted some estates to experiment with carbonic maceration.[3] Low yields are considered critical to the success of Châteauneuf-du-Pape with the principal grape varieties tending to make thin and bland wine when produced in higher quantities. The AOC requirements limit yields to 368 gallons per acre, which is nearly half the yields allowed in Bordeaux.[14]

The common technique of using small barrel oak is not widely used in the Châteauneuf-du-Pape area, partly due to the fact that the principal grape Grenache is prone to oxidation in the porous wooden barrels. Instead, Grenache is vinified in large cement tanks, while the other grape varieties are made in large old barrels called foudres that do not impart the same "oaky" characteristics as the smaller oak barrels.[14]