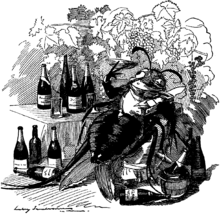 The phylloxera, a true gourmet, finds out the best vineyards and attaches itself to the best wines
Cartoon from Punch, 6 Sep. 1890)

Grape phylloxera (Daktulosphaira vitifoliae Fitch (1855) , family Phylloxeridae); originally described in France as Phylloxera vastatrix; equated to the previously described Daktulosphaira vitifoliae, Phylloxera vitifoliae; commonly just called phylloxera (pronunciation: /fɪˈlɒksərə/; from Greek φύλλο, leaf, and ξερό, dry) is a pest of commercial grapevines worldwide, originally native to eastern North America. These almost microscopic, pale yellow sap-sucking insects, related to aphids, feed on the roots and leaves of grapevines depending on the phylloxera genetic strain. On Vitis vinifera L., the resulting deformations on roots ("nodosities" and "tuberosities") and secondary fungal infections can girdle roots, gradually cutting off the flow of nutrients and water to the vine. Nymphs also form protective galls on the undersides of grapevine leaves of some Vitis species and overwinter under the bark or on the vine roots; these leaf galls are typically only found on leaves of American vines.

The phylloxera louse has a complex life-cycle of up to eighteen stages that is divisible into four principal forms: sexual form, leaf form, root form, and winged form.

The sexual form begins with male and female eggs laid on the underside of young grape leaves. The male and female at this stage lack a digestive system, and once hatched, they mate and then die. Before the female dies, she lays one winter egg in the bark of the vine's trunk. This egg develops into the leaf form. This nymph, the fundatrix (stem mother), climbs onto a leaf and lays eggs (via parthenogenesis) into a leaf gall she creates by injecting saliva into the leaf. The nymphs that hatch from these eggs may move to other leaves, or move to the roots where they begin new infections in the root form. In this form they perforate the root to find nourishment, infecting the root with a poisonous secretion that prevents it from healing. It is this poison which eventually kills the vine. This nymph reproduces four to seven more generations of eggs (which are also capable of parthenogenetic reproduction) each summer. These offspring spread out to other roots of the vine, or to the roots of other vines through cracks in the soil. The generation of nymphs that hatch in the autumn hibernate in the roots and emerge the following spring when the sap begins to rise. In humid areas, the nymphs develop into the winged form (otherwise, they perform the same role without wings). These nymphs start the cycle over again by either remaining on the vine to lay male and female eggs on the bottom side of young grape leaves, or flying to an uninfected vine to do the same.

Many attempts have been made to interrupt this life cycle to eradicate phylloxera, but the louse has proven to be extremely adaptable, as no one stage of the life cycle is solely dependent upon another for the propagation of the species.

In the late 19th century the phylloxera epidemic destroyed most of the vineyards for wine grapes in Europe, most notably in France. Phylloxera was introduced to Europe when avid botanists in Victorian England collected specimens of American vines in the 1850s. Because phylloxera is native to North America, the native grape species there are at least partially resistant. By contrast, the European wine grape Vitis vinifera is very susceptible to the insect. The epidemic devastated vineyards in Britain and then moved to the mainland, destroying most of the European grape growing industry. In 1863, the first vines began to deteriorate inexplicably in the southern Rhône region of France. The problem spread rapidly across the continent. In France alone, total wine production fell from 84.5 million hectolitres in 1875 to only 23.4 million hectolitres in 1889.[1] Some estimates hold that between two-thirds and nine-tenths of all European vineyards were destroyed.

In France, one of the desperate measures of grape growers was to bury a live toad under each vine to draw out the "poison".[1] Areas with soils composed principally of sand or schist were spared, and the spread was slowed in dry climates, but gradually the aphid spread across the continent. A significant amount of research was devoted to finding a solution to the phylloxera problem, and two major solutions gradually emerged: grafting cuttings onto resistant rootstocks and hybridization.

Use of a resistant, or tolerant, rootstock, developed by Charles Valentine Riley in collaboration with J. E. Planchon and promoted by T. V. Munson, involved grafting a Vitis vinifera scion onto the roots of a resistant Vitis aestivalis or other American native species. This is the preferred method today, because the rootstock does not interfere with the development of the wine grapes, and it furthermore allows the customization of the rootstock to soil and weather conditions, as well as desired vigor. Unfortunately not all rootstocks are equally resistant. Between the 1960s and the 1980s in California, many growers used a rootstock called AxR1. Even though it had already failed in many parts of the world by the early twentieth century, it was thought to be resistant by growers in California. Although phylloxera initially did not feed heavily on AxR1 roots, within twenty years, mutation and selective pressures within the phylloxera population began to overcome this rootstock, resulting in the eventual failure of most vineyards planted on AxR1. The replanting of afflicted vineyards continues today. Many have suggested that this failure was predictable, as one parent of AxR1 is in fact a susceptible V. vinifera cultivar. But the transmission of phylloxera tolerance is more complex, as is demonstrated by the continued success of 41B, an F1 hybrid of Vitis berlandieri and Vitis vinifera. The full story of the planting of AxR1 in California, its recommendation, the warnings, financial consequences, and subsequent recriminations remains to be told. Modern phylloxera infestation also occurs when wineries are in need of fruit immediately, and choose to plant ungrafted vines rather than wait for grafted vines to be available.

The use of resistant American rootstock to guard against phylloxera also brought about a debate that remains unsettled to this day: whether self-rooted vines produce better wine than those that are grafted. Of course, the argument is essentially irrelevant wherever phylloxera exists. Had American rootstock not been available and used, there would be no V. vinifera wine industry in Europe or most places other than Chile, Washington State, and most of Australia. Cyprus avoided the phylloxera plague, and thus its wine stock has not been grafted for phylloxera resistant purposes.

By the end of the 19th Century, hybridization became a popular avenue of research for stopping the phylloxera louse. Hybridization is the breeding of Vitis vinifera with resistant species. Most native American grapes are naturally phylloxera resistant (Vitis aestivalis, rupestris, and riparia are particularly so, while Vitis labrusca has a somewhat weak resistance to it) but have aromas that are off-putting to palates accustomed to European grapes. The intent of the cross was to generate a hybrid vine that was resistant to phylloxera but produced wine that did not taste like the American grape. Ironically, the hybrids tend not to be especially resistant to phylloxera, although they are much more hardy with respect to climate and other vine diseases. The new hybrid varieties have never gained the popularity of the traditional ones. In the EU they are generally banned or at least strongly discouraged from use in quality wine, although they are still in widespread use in much of North America, such as Missouri, Ontario, and upstate New York, where they yield commercially acceptable wines.

The only European grape that is natively resistant to phylloxera is the Assyrtiko grape which grows on the volcanic island of Santorini, Greece, although it is not clear whether the resistance is due to the rootstock itself or the volcanic ash on which it grows.

To escape the threat of phylloxera, wines have been produced since 1979 on the sandy beaches of Provence’s Bouches-du-Rhône, which extends from the Gard Coast to the waterfront village of Saintes Maries de la Mer. The sand, sun and wind in this area has been a major deterrent to phylloxera. The wine produced here is called "Vins des Sables" or "wine of the sand".[2]