The Mitsubishi Starion is a two-door, turbocharged four-cylinder rear-wheel drive four-seat sports car that was in production from 1982 to 1989. It was also marketed in North America as the Conquest under the Chrysler, Dodge, and Plymouth names; both the Starion and Conquest came to an end in 1989. Although preceded by earlier turbocharged designs such as the Porsche 930 (1975), Saab 99 (1978) and the Mitsubishi Lancer EX 2000 Turbo (1980), it is considered to be one of the originators of the modern Japanese turbocharged performance automobile genre.[1][2]

The "Starion" name is claimed by Mitsubishi to be a contraction of "Star of Orion", although an urban legend claims that it was intended to be stallion, as a result of an "Engrish" mistranslation.[2][3]

The Starion's appearance in 1982 occurred during a period in which a number of Japanese Grand Tourer (GT) sports cars were increasing in popularity. Nearly every major Japanese manufacture put their hats into the ring. Mitsubishi produced the turbocharged Starion as their entry into the competition. Its most direct competitors were the Nissan Z cars, Mazda RX-7 and Toyota Supra. The car is often compared to the Porsche 924 and 944 turbo models, with which shares many qualities.

Over the run of the vehicle there was constant evolution with nearly every year bringing changes, power increased as well as size and complexity.

In most markets widebody cars where given the label of Starion ESI-r or Conquest TSI. Markets that never received the widebody had the ESI-r label these cars had similar performance as the widebodies, just in a flatty body.

Production ceased entirely by 1989, and its successor, the GTO was fitted with the mechanicals of the recently demonstrated Mitsubishi HSX Sports Coupe concept vehicle.

The Starion used a traditional front-mounted engine with rear-wheel drive layout. Many came with a limited slip differential and anti-lock brakes (single channel, rear wheels only) as standard features. The entire chassis was derived from the previous high performance variant of the Mitsubishi Sapporo or Mitsubishi Galant Lambda sports coupe, with a MacPherson strut suspension and swaybars that were fitted to front and rear.[1]

Engine capacity differed between markets. American customers received the larger SOHC Astron G54B 2.6 L engine. Most markets received the SOHC 2.0 L Sirius 4G63 engine, subsequently featured in DOHC form in later Mitsubishi sport compacts such as the Mitsubishi Lancer Evolution. Both the 2.0 L and the 2.6 L produced roughly the same horsepower, the larger 2.6 L did have a slight torque advantage and the 2.0L had a higher redline. Reporters of the time considered the 2.0l to be peaky and exciting, while the American market 2.6l had plenty of torque, but was less rewarding. Both engines featured computer controlled fuel injection and turbocharging. After 1987, European Starion models were also fitted with the 2.6 L engine, as was the GSR-VR for Japan. The move to the 2.6 L in all markets was spurred by emissions restrictions around the world tightening to meet the American standards for lead in fuels. Reviews during the change were negative as many felt the car was slower, for most of these markets this was the case as the engine change also coincided with a move to the heavier body style.

The last of the leaded petrol Starion EX's sold in New Zealand had 8 Valves, an Intercooler and 225 Hp (168 kW.)

A naturally aspirated version known as the GX was also built for the Japanese market, however production ceased in 1983 due to low sales figures. The Starion GX had no power windows, no air conditioning, no independent rear suspension, no fuel injection and did not have power-assisted steering.

The Starion was produced in two distinct body styles; A narrowbody and widebody often referred to as "Flatty" and "Fatty". Only the narrow body was offered until the 1985.5 model year in the US. Mechanically both body styles were similar, but many parts are not interchangeable. The introduction of the widebody also split the car into to distinct ranges. One a non-intercooled lower horsepower car using the narrow body style and a high performance intercooled widebody. It should be noted some markets never received the widebody cars, but had flatties with most of the wide body upgrades as their top of the line model.

Seating was a 2+2 arrangement, although the rear seats are not too suitable for large adults. The front seats were adjustable for lumbar, angle, knee support, position and featured variable-angle side-braces.

One of the more unusual features was that the seat belts were located in the doors for the driver and front passenger. '87 and later American models featured electrically operated seat belts. The cars were also some of the first to use automatic climate control. Newer models also featured power windows that remained powered up to 30 second after the engine was turned off.

Constant upgrades to the model included the addition of an intercooler, 5 lug wheels replacing the four-bolt wheels it had inherited from the rear wheel drive Mitsubishi Galant Lambda, rear power train changes from 4 to 6 bolt axles, various fuel management upgrades and upgrades to the transmission. The "best" year is often debated, For US market cars the debate is most often between the '86 and '89 models. 89's have more developed fuel management and stronger running gear. 86's are lighter, somewhat simpler to modify and have non-motorized seatbelts. 87-88s are similar to 89 in most respects and can be easy upgraded to 89 specs.

Towards the end of the models US run a widebody could be bought with a "Sports Handling Package" or SHP equipped. This was made up of adjustable front and rear struts and 1 inch wider wheels (up from 7/8 the 8/9 fronts and rear). The SHP was only offered during the 88 and 89 model years. The package can be retro fitted to earlier widebody cars.

The drag coefficient was around 0.32;[1][2] although quite angular, the aerodynamics were quite efficient for the era and around the average for a modern hatchback. It outperformed the Mazda RX-7 and the Nissan 300ZX upon its release.[1]

Turbo upgrades are very popular as a wide variety of higher performance, Mitsubishi turbos can be mated with the TD05 hotside.

Upgrading the cars to later, more powerful, {DOHC} versions of the 4G63 is also popular and can be done with little work as the {SOHC} version of that engine was offered in non-US market cars.

A number of models existed throughout the world during 1982 to 1990.

The Japanese domestic market had a large range of Starions to choose from.

The Roman numeral after 'GSR' denotes the vehicle specification. Some examples can be found below:

Australian vehicles were mostly similar to the European Turbo specification. The J codes below denote the model version, and are found on the Australian Vehicle Information Plates.

It was marketed in North America by Mitsubishi as the Starion from 1983 until 1989 and by Chrysler as the Conquest under both the Dodge and Plymouth names from 1984 to 1986 and under the Chrysler name from 1987 until 1989.

With the exception of Australia, many models were available as either narrowbody or widebody shell styles. 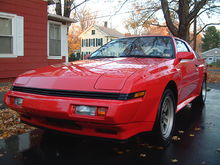 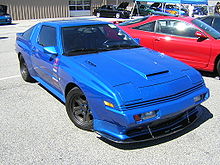 The Starion was a prominent competitor in motorsports up to International level during the 1980s and performed well on the circuit in Group A and Group N races of the era. Andy McLennan driving a Simmons drums sponsored Starion was very successful, picking up many race wins and a Monroe championship, this against the semi works car of Colin Blower.[4] In Holland, John Hugenholtz won the over 2L class in the Dutch Championship, with the Colin Blower-prepared Mitsubishi Dealers car. In the United States, the Starion became best known for successes in endurance racing. Starions from Dave Wolin's Team Mitsubishi, with turbocharged 2.6 L G54B engines built by noted Lotus engine guru Dave Vegher, captured the prestigious "Longest Day of Nelson Ledges" 24 hour endurance race four years running from 1984 through 1987.[5] Team Mitsubishi Starions also won the Sports Car Club of America (SCCA) U.S. Endurance Championships three of those four years, competing against the fully factory-backed (Wolin's team was only partially sponsored by Mitsubishi) efforts from Chrysler, Audi, Nissan and Mazda. Although not commonly seen in modern motorsports, a number are still raced on both circuit and in special stage rally events, usually by privateers.

The Starion was not very successful off-road, but found victory in Group A World Rally Championships and Asia Pacific Rally Championships during 1987 and 1988. An all wheel drive version of the Starion was also produced for Group B specifications (one of the few Japanese automobile manufacturers to enter this class), but after an encouraging start as a prototype, it was not homologated before the FIA banned Group B cars for safety reasons. The Starion was converted to all wheel drive by adding a strengthened transfer case from a Pajero behind the transmission. This configuration allowed the engine to be situated well back in the chassis, for improved front/rear weight distribution compared to the Audi Quattro, whose configuration required the engine to be far forward in the car. Although the wheelbase did not change, the use of regular headlights rather than the production model's pop-up headlights allowed the nose to be six inches shorter, as well as saving several pounds in weight. Further weight was saved by the use of carbon fiber for the driveshafts, sumpguard, and lower arms of the suspension, and fiberglass for the hood (bonnet), tailgate, door skins, fenders, bumpers and spoilers, resulting in a final weight of less than 1,000 kg (2,200 lb), lighter than the Audi Quattro. The car was developed with a turbocharged and intercooled version of Mitsubishi's 2.0 L fuel injected engine, but the final goal was to use a turbocharged and intercooled 261 kW (355 PS; 350 hp) version of the Sirius Dash engine that Mitsubishi announced at the 1983 Tokyo Motor Show, which switched electronically at 2500 rpm from one inlet valve per cylinder to two. The car was campaigned for Mitsubishi by Team Ralliart in Essex, Great Britain, under rally veteran Andrew Cowan and engineer Alan Wilkinson, who had developed the Audi Quattro for Audi Sport UK. 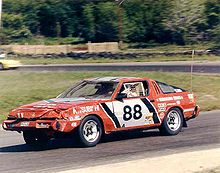