The Pacifica was the first jointly engineered product of the 1998 Chrysler-DaimlerBenz "merger of equals." [1] Chrysler developed the vehicle in 30 months at a cost below $1 billion.[2] The CUV was inspired by the 1999 Chrysler Pacifica and 2000 Chrysler Citadel concept cars. Chrysler marketed the Pacifica as a “sports-tourer,"[3] building the vehicle at the Windsor Assembly Plant, alongside the long-wheelbase minivans from early 2003 [2] through November 2007. 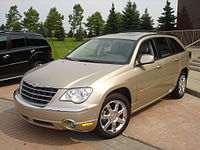 The Pacifica's exterior was slightly restyled for 2007, including its headlights, hood, fenders, grille, front fascia and wheels. The brand new 4.0 L SOHC V6 engine was added, to complement the standard 3.8 L EGH V6. With the addition of the new engine and transmission, Dual Exhaust was added. New options included a rearview camera incorporated into the navigation system, stain, odor, and static-resistant seat fabric and new wheel options.

The Pacifica was the first jointly engineered product of the 1998 Chrysler-DaimlerBenz "merger of equals." [1] Chrysler developed the vehicle in 30 months at a cost below $1 billion.[2] [6] Parent DaimlerChrysler's other entry in the luxury SUV market, the M-Class (badged as the ML) appeared to be a rushed engineering job from the Mercedes-Benz truck division yet it was a great success (the second-generation M-Class would move from a light truck to a crossover platform).[7]

Despite the Mercedes-like interior and other Mercedes-derived technologies, however, the Pacifica may have been overpriced for its marque, as general public perception did not consider Chrysler a luxury brand like that of BMW, Lexus, Lincoln, and Mercedes-Benz. A three year, multi-million dollar contract was signed with singer Celine Dion in 2003, with advertisements designed to reposition Chrysler as a premium marque. However, the promotional campaign was widely considered a flop and so DaimlerChrysler ended it just one year later.[8] Indeed DaimlerChrysler was reluctant to heavily promote the fact that the Pacifica (as well as several other jointly-engineered vehicles such as the Crossfire and 300) featured technologies from its Mercedes division due to fear of cannibalization, as Benz vehicles had much higher prices and profits than their Chrysler equivalents.[6]

The Pacifica was widely praised for its carlike ride and handling. [9] However the 2004-06 model years of the Pacifica were fuel thirsty and vastly underpowered considering its hefty weight, with its weak 250hp 3.5-liter V6 and aging four-speed automatic transmission, which gave poor performance considering the price of this vehicle.[4] This was only rectified in 2007 with a new V6 engine and a new six-speed automatic which was nonetheless too late to salvage sales. Throughout its lifetime there were few engine options, yet despite client requests there was never an available Hemi or SRT version like the 2005 Chrysler 300.[6] The first Pacifica models were equipped lavishly and were expensive as a result, as they included costly but mostly unnecessary features such as a navigation system, DVD entertainment system, and a load-leveling suspension.[10] For the 2005 model year Chrysler released a de-contented LX trim that deleted the third row seats and had cloth upholstery.[6]

The initial production models of the Pacifica gave the nameplate a bad reputation, due to poor mechanical reliability of the transmission and engine, liner and interior flaws, electrical glitches, and low build quality.[4] Furthermore, Chrysler was slow to react in fixing these problems. [6][11]

DaimlerChrysler heavily touted the Pacifica as the next "big thing" in the fledgling crossover market, forecasting sales of 100,000 per year. These estimations proved to be wildly optimistic, as sales never came close to expectations. There was stiff competition from other luxury crossovers like the Lexus RX and BMW X5; the RX was the volume leader and widely considered the benchmark for the class.[6] Furthermore the company lost money on every Pacifica sold, as it used a modified minivan platform, but it didn’t have any interior commonality with other Chrysler, Dodge or Jeep vehicles.[11]

Positioned as a large crossover wagon, the Pacifica was designed to combine the convenience of a minivan, the elevated position of an SUV, and the handling of a sedan. Compared to traditional (light-truck based) luxury SUVs such the Lincoln Navigator, the Pacifica had less heavy cargo-hauling and towing capacity but otherwise it was superior in handling, comfort, interior, and amenities. Crossovers with three-row seating tend to be inferior to minivans in passenger room; the Pacifica was no exception as its third-row seats were considered too small compared to that of the Chrysler Town & Country which was less expensive and more fuel-efficient. However other luxury automakers have no minivans in most of their lineups which avoids cannibalization of the sales of their large crossovers, so it didn't help that the Pacifica inevitably drew comparisons to the Town & Country.[9] Furthermore DaimlerChrysler was unable to convince the public that the Pacifica was a pioneer of new category of vehicle, as consumers preferred more traditional SUV-style crossovers, and they faced the same problem with the release of the 2006 Mercedes-Benz R-Class in 2005. Like the Pacifica the R-Class is supposed to share the attributes of the minivan, SUV, and a wagon, and despite the R-Class being more upscale and sophisticated (based on a rear-wheel drive platform) with a better executed launch (while the Pacifica was plagued with production and marketing flaws),[12] it has sold poorly compared to the GLK and M-Classes.[13]

At first, Pacifica was powered by a 3.8-liter V6 with 210 horsepower and 240 pound-feet (330 N·m) of torque. Reviewers faulted the gruff engine, which was barely up to the task of battling the Pacifica's formidable mass, especially on fully loaded all-wheel-drive models. A new 3.5-liter V6 with 250 hp (186 kW) and 250 lb·ft (340 N·m) became standard on all but the base front-wheel-drive model in 2005, and the 3.8-liter V6 was eliminated for 2006, leaving the 3.5-liter unit as the sole available engine. For 2007, the 3.8-liter mill returned (an example of Chrysler's poor judgment) in the base front-wheel-drive model, this time rated even lower at 200 hp (149 kW), and a 4.0-liter V6 replaced the 3.5-liter V6 in all other models. The 4.0-liter engine cranked out only 255 hp (190 kW) and 265 lb·ft (359 N·m), but mated with a new six-speed automatic transmission (the base engine continued with the old four-speed unit), gave more impressive 0-60 mph times of 7.4 seconds.[14] Until the 2007 introduction of the 4.0-liter V6, engines were always a poor choice from Chrysler with underpowered inefficient engines. The Pacifica was the bottom of the chart in its category with regards to fuel economy.[11]

In 2006 the Chrysler Pacifica won an award from the Insurance Institute for Highway Safety as the “best pick frontal”. In 2007, the Pacifica won a five star front and side crash test rating. The Pacifica received this award for being equipped with traction control, four wheel disc brakes with anti-lock braking system, all-row side curtain air bags, Electronic Stability Program, and tire pressure monitoring system.[citation needed].

NHTSA is currently investigating a propensity toward engine bay fires in the 2007 Chrysler Pacificas equipped with the 4.0-liter V6.[15]

Third row seating was standard on all but the base Pacifica. Front row seats featured an eight-way power driver seat and four-way power passenger seat on all standard Pacificas. The Limited and Touring included a ten-way power seat for the driver. The Pacifica could be optioned with a seating preference memory system that also controlled mirrors and pedals. Seats were available with stain and odor resistant fabric or leather on all seats and six different fabric designs.