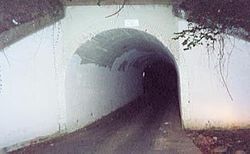 The "Bunny Man Bridge", an example of legend tripping.

An urban legend, urban myth, urban tale, or contemporary legend, is a form of modern folklore consisting of stories that may or may not have been believed by their tellers to be true.[1] As with all folklore and mythology, the designation suggests nothing about the story's veracity, but merely that it is in circulation, exhibits variation over time, and carries some significance that motivates the community in preserving and propagating it.

Despite its name, an urban legend does not necessarily originate in an urban area. Rather, the term is used to differentiate modern legend from traditional folklore in pre-industrial times. For this reason, sociologists and folklorists prefer the term contemporary legend.

Urban legends are sometimes repeated in news stories and, in recent years, distributed by e-mail. People frequently allege that such tales happened to a "friend of a friend"; so often, in fact, that "friend of a friend," ("FOAF") has become a commonly used term when recounting this type of story.

Some urban legends have passed through the years with only minor changes to suit regional variations. One example is the story of a woman killed by spiders nesting in her elaborate hairdo. More recent legends tend to reflect modern circumstances, like the story of people ambushed, anesthetized, and waking up minus one kidney, which was surgically removed for transplantation (a story which folklorists refer to as "The Kidney Heist").[2]

The term “urban legend,” as used by folklorists, has appeared in print since at least 1968.[3] Jan Harold Brunvand, professor of English at the University of Utah, introduced the term to the general public in a series of popular books published beginning in 1981. Brunvand used his collection of legends, The Vanishing Hitchhiker: American Urban Legends & Their Meanings (1981) to make two points: first, that legends and folklore do not occur exclusively in so-called primitive or traditional societies, and second, that one could learn much about urban and modern culture by studying such tales.

Many urban legends are framed as complete stories with plot and characters. The compelling appeal of a typical urban legend is its elements of mystery, horror, fear or humor. Often they serve as cautionary tales.[4] Some urban legends are morality tales that depict someone, usually a child, acting in a disagreeable manner, only to wind up in trouble, hurt, or dead.[4] 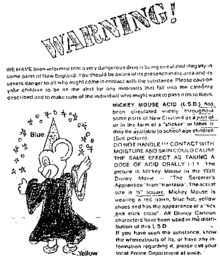 Like older legends and myths, these narratives can rarely be traced to an original source. Moreover, as Jan Brunvand pointed out[6] antecedent legends including some of the motifs, themes and symbolism of these urtexts can readily be identified. Cases in which there is some likelihood that at least a partial inspiration has been located include "The Death Car," traced by Richard Dorson to Michigan, United States;[6] "the Solid Cement Cadillac"[7] and the possible origin of "The Hook" in the 1946 series of Lovers' Lane murders in Texarkana, Texas, USA.[8][9] The urban legend that Coca-Cola developed the drink Fanta to sell in Nazi Germany without public backlash originated as the actual tale of German Max Keith, who invented the drink and ran Coca-Cola's operations in Germany during World War II.[10]

The teller of an urban legend may claim it happened to a friend, which serves to personalize, authenticate and enhance the power of the narrative.[1] Many urban legends depict horrific crimes, contaminated foods or other situations which would affect many people. Anyone believing such stories might feel compelled to warn loved ones. Not seldom, news organizations, school officials and even police departments have issued warnings concerning the latest threat.[11] In the "Lights Out" rumor, street gang members would drive without headlights until a compassionate motorist responded with the traditional flashing of headlights, whereupon a new gang member would be required to murder the citizen as a requirement of initiation.[12] A fax received at the Nassau County, Florida fire department was forwarded to police, and from there to all city departments. Even the Minister of Defence for Canada was taken in by the same legend; he forwarded an urgent security warning to all Ontario Members of Parliament.[12]

Many urban legends are essentially extended jokes, told as if they were true events.[13] Urban legends typically include one or more common elements: the legend is retold on behalf of the original witness or participant; dire warnings are often given for those who might not heed the advice or lesson contained therein (this is a typical element of many e-mail phishing scams); and it is often touted as "something a friend told me," while the friend is identified by first name only or not identified at all.[14] One of the classic hallmarks of false urban legends is a lack of specific information regarding the incident, such as names, dates, locations, or similar information.

Persistent urban legends, however unlikely, often maintain at least a degree of plausibility, for instance a serial killer deliberately hiding in the back seat of a car. One such example since the 1970s has been the recurring rumor that the Procter and Gamble Company was associated with Satan worshippers because of details within its nineteenth-century trademark.[15] The legend interrupted the company's business to the point it stopped using the trademark.[16]

Belief and relation to mythology

The earliest term by which these narratives were known, “urban belief tales,” highlights what was then thought to be a key property: they were held, by their tellers, to be true accounts, and the device of the FOAF was a spurious but significant effort at authentication.[17] The coinage leads in turn to the terms "FOAFlore" and "FOAFtale". While at least one classic legend, the “Death Car”, has been shown to have some basis in fact,[18] folklorists as such are interested in debunking these narratives only to the degree that establishing non-factuality warrants the assumption that there must be some other reason why the tales are told and believed.[19] As in the case of myth, these narratives are believed because they construct and reinforce the worldview of the group within which they are told, or “because they provide us with coherent and convincing explanations of complex events”.[20] Recently social scientists have started to draw on urban legends in order to help explain complex socio-psychological beliefs, such as attitudes to crime, childcare, fast food, SUVs and other "family" choices.[21] Here the authors make an explicit connection between urban legends and popular folklore, such as Grimm's Fairy Tales where similar themes and motifs arise. For this reason, it is characteristic of groups within which a given narrative circulates to react very negatively to claims or demonstrations of non-factuality; an example would be the expressions of outrage by police officers who are told that adulteration of Halloween treats by strangers (the subject of periodic moral panics) is extremely rare, if it has occurred at all.[19][22]

The term urban myth is also used. Brunvand feels that urban legend is less stigmatizing because myth is commonly used to describe things that are widely accepted as untrue. The more academic definitions of myth usually refer to a supernatural tale involving gods, spirits, the origin of the world, and other symbols that are usually capable of multiple meanings (cf. the works of Claude Lévi-Strauss, Ernst Cassirer, Mircea Eliade, Joseph Campbell, Carl Jung, and Northrop Frye for various interpretations). However, the usage may simply reflect the idiom.

The term urban myth is preferred in some languages such as Mexican Spanish, where conventional coinage is "mito urbano" rather than "leyenda urbana." In French, urban legends are usually called légendes urbaines; the terms légendes contemporaines are still preferable because "légendes urbaines" is an improper and meaningless verbatim translation, though used by some French sociologists or journalists. But neither expression is commonly used: for ordinary French people, the more genuine terms rumeur or canular, not to mention more colloquial and expressive words, describe this phenomenon of "viral spread tall story" properly enough. The term hoax (in "Frenglish") is known in the Web community.

Some scholars prefer the term contemporary legend to highlight those tales with relatively recent or modern origins. An eighteenth-century pamphlet alleging that a woman was tricked into eating the ashes of her lover's heart could be described as a contemporary legend with respect to the eighteenth century.

The Internet makes it easier to spread urban legends, and also to debunk them.[23] Discussing, tracking, and analyzing urban legends is the topic of the Usenet newsgroup, alt.folklore.urban, and several web sites, most notably snopes.com. The United States Department of Energy had a service, now discontinued, called Hoaxbusters that dealt with computer-distributed hoaxes and legends.

Television shows such as Urban Legends, Beyond Belief: Fact or Fiction, and later Mostly True Stories: Urban Legends Revealed feature re-enactments of urban legends detailing the accounts of the tales and (typically) later in the show, these programs reveal any factual basis they may have. Since 2004 the Discovery Channel TV show MythBusters tries to prove or disprove urban legends by attempting to reproduce them using the scientific method. The 1998 film Urban Legend featured students extensively discussing popular urban legends while at the same time falling victim to them.