Together with its nameplate variants, the Chrysler minivans have ranked as the 13th bestselling automotive nameplate worldwide, with over 12 million sold.[1]

The European Chrysler Voyager was first released in 1988, nearly identical to its American counterpart, the Plymouth Voyager; the only visual differences between the two were the head/taillights and grille. Besides the slightly different appearance, the European Voyagers were sold with different engines, including diesel engines, which are popular in Europe; and the trim was different. They were also available with manual transmission & a foot operated emergency brake.

The current European Chrysler Grand Voyagers are very similar to the 2008 and later Chrysler Town & Country cars, and are sold only in the long-wheelbase version (as in North America).

Although now produced solely in Ontario, Canada, the Grand Voyagers are still available with diesel engines as standard. These diesel engines are based on a modern double overhead cam common rail design from VM Motori of Italy.

Starting in 2011, the Voyager will be sold under the Lancia badge in Europe to strengthen the Chrysler-Lancia integration. However, it will remain branded as the Chrysler Voyager in the UK only.

1991-1995 models in Europe are rebadged Dodge Caravans, although the Caravan in the USA was sold alongside the Chrysler Voyager in counterparts. For 1991, the Chrysler Voyager in Europe was identical to the Plymouth Voyager in the United States except that the 3.8 L V6 was not available for the Chrysler Voyager. Base models of the Voyager were offered in most states with either a 2.4 L four-cylinder or a 3.0 L Mitsubishi V6 engine, except in California and several northeastern states, where the Mitsubishi V6 didn't meet emissions standards. In those locales, the 3.3 L engine was offered instead. Starting from 1994 was offered for European market 2.5 L turbo diesel produced by VM motori. The 1991-1995 Chrysler Voyager's mesh grille is related to a Dodge Caravan in the United States. It was also the final generation with manual transmission.

1996-1999 models in Mexico are rebadged Dodge Caravans, although the Caravan was sold alongside the Voyager. For 2000, the Chrysler Voyager was identical to the Plymouth Voyager except that the 3.8 L V6 was not available for the Chrysler Voyager. Base models of the Voyager were offered in most states with either a 2.4 L four-cylinder or a 3.0 L Mitsubishi V6 engine, except in California and several northeastern states, where the Mitsubishi V6 didn't meet emissions standards. In those locales, the 3.3 L engine was offered instead. For European market were offered also 2.0 L Straight-4 SOHC and DOHC engines and 2.5 L turbo diesel produced by VM motori.

US pricing and trim levels for both generations

According to EuroNCAP crash test results, the 1996 model Chrysler Voyager 'did so badly in the frontal impact that it earned no points,[2] making it the worst of the group. The body structure became unstable and the steering column was driven back into the driver's chest and head'. The 2006 model Chrysler Voyager fared little better, achieving just 19% in the frontal impact test, with an overall score of 2 stars out of a possible 5.[3] However, chest compression measurements on the test dummy 'indicated an unacceptably high risk of serious or fatal injury. As a result, the final star in the adult occupant rating is struck-through'.

Despite the bad results in the Euro NCAP crash tests, statistics from the real world indicate that this is not the whole picture. Folksam is a Swedish insurance company that in May 2009 published a report on injuries and survivability of 172 car models. The 88-96 generation got a real world rating of "Average", and the 96-00 generation got a rating called "Safest" (at least 30% safer than the average car.) 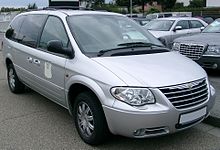 In Europe Chrysler began offering the Voyager with Generation I, followed by a Generation II model in 2001 with a new engine range — including larger, more economical diesel engines (2.5 L and for 2005 - the 2.8 L 4 cyl. from VM Motori) and more fuel-efficient petrol engines (4 cyl. and V-6).

The Generation II model continues to be produced in China for that market.

Chrysler introduced the new Grand Voyager for 2008 and successfully positioned it in the automotive market as a luxury MPV suited for large families. The Grand Voyager is visually identical to the Chrysler Town & Country which is sold in the North American market. In similar fashion to the other large multi-purpose vehicles (MPVs) on the market the Grand Voyager is sold with a standard diesel engine in Europe.

However, the seating is arranged in the 2-2-3 (front to rear) layout common in North America, rather than the 2-3-2 layout often seen in SUVs and MPVs in Europe. On right hand drive (RHD) models the gear shift lever is placed on a floor mounted console between the seats, in contrast to the instrument panel positioning found on LHD models.

Optional engine on top of the range Limited models:

The Lancia version is offered with two engines both compliant with Euro5 emission standards.

The Chrysler Voyager has incorporated various seating systems for their minivans to enhance interior flexibility.

In 1992, Chrysler introduced a second row bench seat integrating two child booster seats. These seats continued as an available option through Generation V until they were discontinued in 2010.

In 1996, Chrysler had introduced a system of seats to simplify installation, removal, and re-positioning— marketed as Easy-Out Roller Seats. The system remained in use throughout the life of the Chrysler Voyager.

When installed, the seats are latched to floor-mounted strikers. When unlatched, eight rollers lift each seat, allowing it to be rolled fore and aft. Tracks have locator depressions for rollers, thus enabling simple installation. Ergonomic levers at the seatbacks release the floor latches single handedly without tools and raise the seats onto the rollers in a single motion. Additionally, seatbacks were designed to fold forward. Seat roller tracks are permanently attached to the floor and seat stanchions are aligned, facilitating the longitiudinal rolling of the seats. Bench seat stanchions were moved inboard to reduce bending stress in the seat frames, allowing them to be lighter.

When configured as two and three person benches, the Easy Out Roller Seats could be unwieldy. Beginning in 2001, second and third row seats became available in a 'quad' configuration — bucket or captain chairs in the second row and a third row three-person 50/50 split "bench" — with each section weighing under 50 lb (23 kg).

Several European automotive magazines and websites have praised the Grand Voyager for its torquey engine, smooth highway ride and comfortable seats for long distance journeys. However, in some cases the diesel engine's fuel consumption and road noise are not considered up to par with the best of the competition.[7][8]

In 2010 Fiat announced that the Chrysler Grand Voyager will undergo a Minor Model Change (MMC) for the 2011 model year, following which it will also be sold under the Lancia brand name in several European markets.

The system is noted for its high strength.[citation needed] The entire load of the seat in the event of a crash is transferred through the swivel mechanism, which is almost twice as strong as the minimum government requirement.[citation needed]

The swivel mechanism includes bumpers that stabilize the seat while in the lock position. When rotated the seat comes off these bumpers to allow easy rotation.

The seat is not meant to be left in an unlocked position or swiveled with the occupant in it, although this will not damage the swivel mechanism.

In the early years of the European Voyager the cars were produced in North America and were exported to Europe (1988–1991).
In 1991 the first "made-in-Austria" Voyagers were produced in Austria at the Eurostar plant nearby Graz. Eurostar was a Joint Venture between Chrysler and the Austrian company Steyr-Daimler-Puch.[9] It was later acquired by Daimler-Chrysler and finally the plant was sold to Magna Steyr in 2002.[10] The minivan production ended there at the end of 2007.[11] Units produced in Austria were marketed in Europe, Asia, and Africa. They were built with Gasoline and diesel engines, with manual transmission version, in short-wheelbase (SWB) and long-wheelbase versions and in right- and left-hand drive versions (all sold as Chrysler Voyager cars).

The current European Voyagers (2008 model) are now produced in Windsor, Ontario, Canada and exported to the European market.