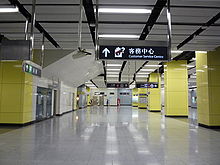 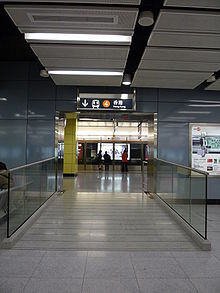 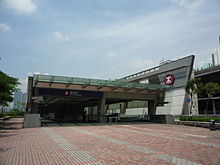 Nam Cheong Station Exit C, right next to it is a subway

Nam Cheong Station was originally the southern terminus of West Rail Line before the opening of Kowloon Southern Link on August 16, 2009. The Airport Express line passes between the tracks of Tung Chung Line without stopping at this station. A public transport interchange, located to the east of the station, allows for transfers to other modes of public transport.

Although this station is on ground level, platform screen doors are still fitted.

Works for Nam Cheong Station started on October 5, 2000, and was built by a joint venture formed by Balfour Beatty and Zen Pacific.[1] The station was opened for public use on December 16, 2003, coinciding with the pre-opening charity trial run day of the KCR West Rail (now West Rail Line), and the Tung Chung Line part of the station started operation. On December 20, the KCR West Rail officially commenced operation, and Nam Cheong became the southern terminus of the rail line.

Upon its completion, the station was a share-used integrated station between MTR and KCR. The station concourse was divided into 2 parts (managed by the 2 rail operators respectively) , Special transfer turnstiles were located between the 2 parts, enabling passengers paying with Octopus card to interchange between the 2 systems with just tapping the card once.

The operations of MTR and KCR merged on December 2, 2007, and the management of the station unified under MTR. Following the network-wide fare zone merger of the former MTR and KCR networks on September 28, 2009, the transfer turnstiles along with the barriers separating the two fare zones were removed, and cross-platform interchange is now provided between platform 1 (West Rail Line to Tuen Mun) and platform 4 (Tung Chung Line to Hong Kong) thanks to the new passageways opened between the 2 platforms. One of the wider passages is aligned with the fifth and sixth carriages of the Hong Kong bound trains on the Tung Chung Line side.

The Kowloon Southern Link (extension of West Rail Line) opened on August 16, 2009, and the West Rail Line was extended to Hung Hom on that day. Nam Cheong lost its status as the southern terminus of West Rail Line, and became an intermediate station for both Tung Chung and West Rail lines.

All four platforms are located at ground level. The platforms are curved because they were built around existing railways. However, the gaps are not very large.

Before the merge of fare systems on 28 September 2008, Octopus Card users transferring between the West Rail Line and Tung Chung Line had to use the transfer gates separating fare areas the MTR and KCR systems. Once the card is placed on the reader, the first section of journey fare will be deducted and passenger can walk over to the other fare area. Passengers who accidentally walk to the wrong area by mistake exit through the exit gates of current area (not the transfer gates) within 15 minutes or an extra fare was charged.