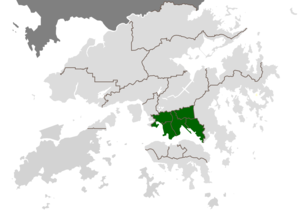 Kowloon refers to an urban area in made up of and , bordered by the strait in the east, and Stonecutter's Island in the west, and in the north, and in the south. It had a of 2,019,533 and its population density was 43,033/km² in 2006. Kowloon is located north of and south of the mainland part of the . The peninsula's area is approximately 47 km² or 18.1 mi². Together with , it contains 48% of Hong Kong's total population.

The more accurate transcription Kau Lung or Kau-lung was often used in derived place names before , for example "Kau-lung Bay" instead of .

The part of Kowloon south of , together with , was ceded by to the under the of 1860. For many years the area remained largely undeveloped, used by the British mainly for -hunting expeditions.

The part of Kowloon north of Boundary Street () was leased by the British as part of the "" in 1898 for 99 years. Within New Kowloon is the Kowloon City, which refers to an area, where the used to be located. The Kowloon Walled City itself was demolished in 1993. The same area was called 官富場 (Pinyin: "Guanfuchang") during the .

In modern day conversations, however, is often not regarded as part of the , but as an integral part of the Kowloon urban area on both sides of Boundary Street. For rates tax purposes, New Kowloon is not considered part of Kowloon. Properties in New Kowloon are subjected to pay the land leases as those in the New Territories.

Large-scale development of Kowloon began in the early 20th century, with the construction of the Kowloon-Canton Railway and the .

Due to Kowloon's close proximity to , building constructions were limited by flight paths. Compared to Hong Kong Island, Kowloon resulted architecturally in much lower skyline. After Kowloon became extremely congested when s for s from the newly established gave way to s, mixed with private residential, commercial and industrial areas.

West Kowloon was once home to a dockyard for the and is now used as a typhoon shelter.It is usually reached by boat; namely the Star Ferry. On , , both parts of Kowloon were transferred to the along with the rest of Hong Kong.