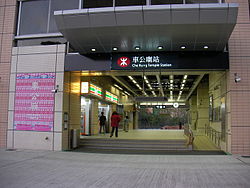 Che Kung Temple Station is a station on Hong Kong's Ma On Shan Line. It is located on Che Kung Miu Road, Sha Tin. Its position was Sha Tin Tau Temporary Housing Area, so it was originally named as "Sha Tin Tau Station" before the Ma On Shan Line operated.

Che Kung Temple station is one of the only 2 stations using side platforms in Ma On Shan Line. So, passengers have to choose the right escalator according to which platform they want to go to.

The Hong Kong Heritage Museum can be seen on the left on a northbound Ma On Shan Rail train as it approaches the station. The museum itself can be reached by leaving Che Kung Temple station through Exit A and turning left and crossing the bridge over the Shing Mun River.