The concept and characters were initially introduced in a two-part episode of the CBS series JAG (JAG episodes 8.20 and 8.21). The show, a spin-off from JAG, premiered on September 23, 2003 on CBS and, to date, has aired eight full seasons and has gone into syndicated reruns on USA Network, Cloo (formerly Sleuth) and Ion Television. Donald Bellisario, who created JAG as well as the well-known series Airwolf, Magnum, P.I. and Quantum Leap, is co-creator and executive producer of NCIS.

NCIS was originally referred to as Navy NCIS during Season 1; however, "Navy" was later dropped from the title as it was redundant. NCIS was joined in its seventh season by a spin-off series, NCIS: Los Angeles, starring Chris O'Donnell and LL Cool J.

On February 3, 2011, NCIS was renewed by CBS for a ninth season after receiving series-high ratings the night before.[1][2] That same year, NCIS was voted as America’s favorite television show.[3] NCIS has had positive reviews, including a user rating of 8.1/10 on Metacritic, indicating universal acclaim.

NCIS follows a fictional team of Naval Criminal Investigative Service Major Case Response Team (MCRT)[4] special agents headquartered at the Washington Navy Yard in Washington, D.C. It is described by the actors and producers (on special features on DVD releases in the United States) as being distinguished by its comic elements, ensemble acting and character-driven plots.

NCIS is the primary law enforcement and counter-intelligence arm of the United States Department of the Navy, which includes the United States Marine Corps. NCIS investigates all major criminal offenses (felonies)—crimes punishable under the Uniform Code of Military Justice by confinement of more than one year—within the Department of the Navy. The MCRT is frequently assigned to high profile cases such as the death of the U.S. president's military aide, a bomb situation on a U.S. Navy warship, the death of a celebrity on a reality show set on a USMC base, terrorist threats, and kidnappings.

It has been revealed through flashbacks that the 'original' head of the MCRT was Special Agent Mike Franks (Muse Watson), who led the unit when it was part of the Naval Investigative Service (NIS), the predecessor agency of the NCIS. He recruited Gibbs shortly after Gibbs' retirement from the Marine Corps, eventually retiring himself some years later. After Franks' departure, Gibbs recruited DiNozzo from the Baltimore Police Department's Homicide Section. The two were briefly joined by Vivian Blackadder (Robyn Lively), whom Gibbs recruited from the FBI. In the second part of the NCIS pilot, Blackadder allowed her emotions to nearly derail an anti-terror operation in Spain. Gibbs is noticeably disappointed; Blackadder is not present in the series' first regular episode, replaced by Caitlin Todd, a Secret Service agent who joins Gibbs' team after resigning from the Secret Service. McGee first appears as a Field Agent assigned to the Norfolk Field Office. He uses his computer skills to aid the MCRT in subsequent investigations through the rest of the first season, until he is officially promoted with his own desk at the Navy Yard in the beginning of the second season.

NCIS is currently led by Director Leon Vance (Rocky Carroll). The first director seen in the series, Thomas Morrow (Alan Dale), left after being promoted to Deputy Director of the Department of Homeland Security. Jenny Shepard (Lauren Holly) was appointed director after Morrow in the first episode of season three. After Shepard was killed in a shootout at the end of the fifth season Vance, who was Assistant Director of NCIS before her death, was seen as Acting Director after her death and was promoted to take her place. 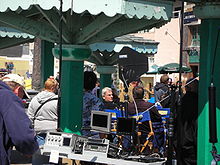 Prior to the launch of the first season, advertisements on CBS identified the show as "Naval CIS". By the time of the launch of the first episode, NCIS was airing under the name Navy NCIS, the name it held for the entire first season. Since the "N" in NCIS stands for "Naval", the name Navy NCIS was technically redundant. The decision to use this name was reportedly made by CBS, over the objections of Bellisario, in order to:

After its successful first season, the name of the series was shortened to NCIS.

It was reported in May 2007 that Donald Bellisario would be stepping down from the show.[11] Due to a disagreement with series star Mark Harmon, Bellisario's duties as show runner/head writer were to be tasked to long-time show collaborators, including co-executive producer Chas. Floyd Johnson and Shane Brennan, with Bellisario retaining his title as executive producer.[12]

NCIS has had crossovers with two other CBS shows:

Seasonal rankings (based on average total viewers per episode) of NCIS.

Note: Each U.S. network television season starts in late September and ends in late May, which coincides with the completion of May sweeps.

The first six seasons of NCIS have been released as full-season boxed sets in Regions 1, 2 and 4. In Germany (which belongs to Region 2), each of season 1 – 4 was released in two DVD-boxes. The first season DVD release omits the two part introductory episode that aired as part of the eighth season of JAG.

CBS Records released the show's first soundtrack on February 10, 2009.[60] The Official TV Soundtrack is a two-disc, 22-track set that includes brand new songs from top artists featured prominently in upcoming episodes of the series as well as the show’s original theme by Numeriklab[61] (available commercially for the first time) and a remix of the theme by Ministry. The set also includes songs performed by series regulars Pauley Perrette and Cote de Pablo.

A sequel to the soundtrack was released on November 3, 2009. NCIS: The Official TV Soundtrack; Vol. 2 is a single disc, 12 track set that covers songs (many previously unreleased) featured throughout the seventh season of the show, including one recording titled "Bitter and Blue" by Weatherly, as well as two songs used in previous seasons.

Chris O'Donnell plays the lead character, G. Callen.[68] LL Cool J, plays the role of Special Agent Sam Hanna, a former Navy SEAL, who works in the undercover unit of NCIS in Los Angeles, and is also fluent in Arabic and an expert on Middle Eastern culture."[64] Peter Cambor and Daniela Ruah were confirmed to be cast as leads of the new spin-off, playing a psychologist (called "Nate") and forensic investigator (called "Kensi") respectively.[66]

Following the shows official pick up Louise Lombard was not signed for the role of Special Agent Lara Macy, that she had played in the pilot, Linda Hunt and Adam Jamal Craig were confirmed to replace her, playing OSP Manager Henrietta Lange and Special Agent Dom Vail, both starring roles. Craig left the series in episode 21 of Season 1, and has been replaced by Eric Christian Olsen playing Marty Deeks,[69] the LAPD/NCIS Liaison. The series started its second season with a 2-hour premiere on September 21, 2010.