O'Donnell, the youngest of seven children (with four sisters and two brothers), was born in Winnetka, Illinois. He is the son of Julie Ann Rohs von Brecht and William Charles O'Donnell, Sr., a general manager of WBBM-AM, a CBS radio station.[1][2] O'Donnell is of paternal Irish and maternal German descent;[3][4] he was raised in a devout Roman Catholic family and attended Roman Catholic schools,[5] including Loyola Academy in Willmette, Illinois for high school, graduating in 1988. O'Donnell attended Boston College and graduated with a Bachelor of Science in marketing.

O'Donnell began modeling at the age of thirteen and was featured in several commercials.

O'Donnell was discovered when he was cast in a McDonald's commercial, in which he served Michael Jordan. His first television role was an appearance on the series Jack and Mike in 1986. At the age of 17, he was offered a chance to audition for a part in the movie Men Don't Leave, with Jessica Lange, and he won the role. In the early 1990s, O'Donnell was a featured player in many successful movies such as Fried Green Tomatoes (1991), School Ties (1992), and Scent of a Woman (1992) with Al Pacino (receiving a nomination for the Golden Globe Award for Best Supporting Actor, which he lost to Gene Hackman for Unforgiven). He was named one of the 12 Promising New Actors of 1992 in John Willis' Screen World, Vol. 44.

O'Donnell as Robin in Batman Forever, 1995

After the success of Blue Sky (1994) and Circle of Friends (1995), O'Donnell played Dick Grayson/Robin in Batman Forever. He reportedly was part of a field of candidates that included Leonardo DiCaprio, Matt Damon, Jude Law, Ewan McGregor, Corey Haim, Corey Feldman, Toby Stephens, and Scott Speedman. Producers narrowed their choices to DiCaprio and O'Donnell. At a comic book convention, they asked a group of 11-year-old boys, the target audience, which actor could win a fistfight. After the boys overwhelmingly declared O'Donnell the winner, he was ultimately given the role. By coincidence, O'Donnell was said to be 20th Century Fox's favorite choice to play Jack Dawson in Titanic, but DiCaprio ended up with the role.

O'Donnell followed with a starring role in 1996's The Chamber, based on the John Grisham novel. He subsequently reprised his role in the Batman sequel, Batman & Robin, in 1997. Although a box office success, the movie was critically panned and O'Donnell himself has called it a low point in his career.[6] He was considered for the lead role in Spider-Man, when the project was in development with James Cameron directing in 1996. Tobey Maguire was ultimately cast.

O'Donnell did not appear in another movie for two years. He was the producers' original choice for the role of James Edwards in Men in Black (1997), but, after he turned it down, the role went to Will Smith.[7] The Robert Altman film Cookie's Fortune, The Bachelor (1999) and Vertical Limit (2000) were only moderately successful. Following Vertical Limit, a four-year hiatus led some to believe Batman & Robin had damaged his career. However, he came back in 2004 with the widely praised Kinsey. O'Donnell also appeared in the 2004 episode of Two and a Half Men entitled "An Old Flame With A New Wick." He played Charlie Sheen's former girlfriend, Jill, who had a sex change and resurfaced in Charlie's life as Bill.

O'Donnell took a lead role in the Fox Network television series Head Cases in 2005. The show was the first show of the fall 2005 season to be canceled, and only two episodes were aired. He was subsequently cast as veterinarian Finn Dandridge on the ABC drama Grey's Anatomy.

O'Donnell stars in NCIS: Los Angeles, a spin-off of NCIS, as G. Callen,[8] an NCIS Special Agent in charge of the Office of Special Projects Team stationed in Los Angeles. CBS describes Callen as "a chameleon who transforms himself into whomever he needs to be to infiltrate the criminal underworld."[9] 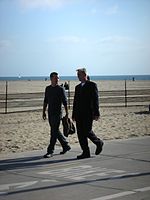 Was once in a relationship with the actress Reese Witherspoon. In 1996, O’Donnell proposed to girlfriend Caroline Fentress. He met her while in college and they married in 1997. The couple have five children – three sons and two daughters:

He has a home in Islesboro, Maine.