Following World War II, the city of Königsberg was transferred to the Soviet Union according to the 1945 Potsdam Agreement, and renamed Kaliningrad. The Albertina was closed and the remaining German population expelled. Today, the Immanuel Kant Baltic Federal University in Kaliningrad claims to maintain the traditions of the Albertina.

Albert, former Grand Master of the Teutonic Knights and first Duke of Prussia since 1525, had purchased a piece of land behind Königsberg Cathedral on the Kneiphof island of the Pregel River from the Samland chapter, where he had an academic gymnasium (school) erected in 1542. He issued the deed of foundation of the Collegium Albertinum on 20 July 1544, after which the university was inaugurated on August 17.

The newly established Protestant duchy was a fiefdom of Poland and the university served as a Lutheran counterpart to the Catholic Cracow Academy. Its first rector was the poet Georg Sabinus, son-in-law of Philipp Melanchthon. All professors had to take an oath on the Augsburg Confession. As the Prussian lands laid beyond the borders of the Holy Roman Empire, both Emperor Charles V and Pope Paul III withheld their approval, nevertheless the Königsberg academy received the royal privilege by King Sigismund II Augustus of Poland on 28 March 1560.

From 1618 the Prussian duchy was ruled in personal union by the Margraves of Brandenburg and in 1657 the "Great Elector" Frederick William of Brandenburg finally acquired full sovereignty over Prussia from Poland by the Treaty of Wehlau. The Albertina was the second oldest university (after the University of Frankfurt (Oder)) and intellectual centre of Protestant Brandenburg-Prussia. Initially it comprised four colleges: Theology, Medicine, Philosophy and Law, later also natural sciences. Subsequent rectors included numerous Hohenzollern Prussian royals (at last Crown Prince William 1908–1918), who had never been to the university, usually represented by a prorector in charge of academy affairs. 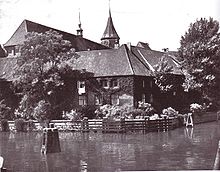 Backside of the Collegium Albertinum on Kneiphof island, where Kant taught. The quarter was destroyed in World War II.

The Prussian lands remained unharmed by the disastrous Thirty Years' War, which gained the Königsber university an increasing popularity among students. In the 17th century, it was known as a home to Simon Dach, serving as rector in 1656/57, and his fellow poets. Tsar Peter I of Russia visited the Albertina in 1697, leading to increased contacts between Prussia and the Russian Empire. Notable Russian students at Königbserg were Kirill Razumovsky, later president of the Russian Academy of Sciences and General Mikhail Andreyevich Miloradovich. The university and the city had profound impact on the development of Lithuanian culture. The first book in Lithuanian language was printed here in 1547 and several important Lithuanian writers attended the Albertina. The university was also the preferred educational institution of the Baltic German nobility.

The 18th century went down in cultural history as the "Königsberg Century" of Enlightenment, a heyday initiated by the Albertina student Johann Christoph Gottsched and continued by the philosopher Johann Georg Hamann and writer Theodor Gottlieb von Hippel the Elder. Notable alumni were Johann Gottfried Herder, Zacharias Werner, Johann Friedrich Reichardt, E. T. A. Hoffmann, and foremost the philosopher Immanuel Kant, rector in 1786 and 1788. These scholars laid the foundations of the later Weimar Classicism and German Romanticism movements.

The Albertina's magnificent botanical garden was inaugurated in 1811 during the Napoleonic Wars. Two years later, Friedrich Bessel established his outstanding observatory next door to the garden. Other university professors included such giants of the science world as the philosopher Johann Gottlieb Fichte (1806–07), the biologist Karl Ernst von Baer (1817–34), the mathematician Carl Gustav Jacobi (1829–42), the mineralogist Franz Ernst Neumann (1828–76) and the physicist Hermann von Helmholtz (1849–55).

In the 19th and 20th centuries, the university was most famous for its school of Mathematics, founded by Carl Gustav Jacob Jacobi, and continued by his pupils Ludwig Otto Hesse, Friedrich Richelot, Johann G. Rosenhain and Ludwig Seidel. It was later associated with the names of Hermann Minkowski (Albert Einstein's teacher), Adolf Hurwitz, Ferdinand von Lindemann and David Hilbert, who was one of the greatest modern mathematicians. The mathematicians Alfred Clebsch and Carl Gottfried Neumann (both born in Königsberg and educated under Ludwig Otto Hesse) founded the Mathematische Annalen in 1868, which soon became the most influential mathematical journal of the time.

Postcard (c. 1900) of the new main building, with Paradeplatz in front

Celebrating the university's 300 years jubilee 0n 31 August 1844, King Frederick William IV of Prussia laid the foundation for the new main building of the Albertina, which was inaugurated in 1862 by Crown Prince Frederick and Prorector Johann Karl Friedrich Rosenkranz. The building on central Paradeplatz was erected in a neo-Renaissance style according to plans designed by Friedrich August Stüler. The facade was adorned by an equestrian figure in relief of Albert of Prussia. Below it were niches containing statues of the Protestant reformers Martin Luther and Philipp Melanchthon. Inside was a handsome staircase, borne by marble columns. The Senate Hall contained a portrait of Emperor Frederick III by Lauchert and a bust of Immanuel Kant by Hagemann and Schadow. The adjacent hall ("Aula") was adorned with frescoes painted in 1870. 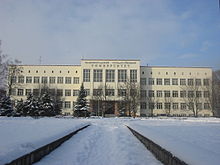 The rebuilt main building of the Albertina is now part of the Immanuel Kant University. Its facade is very different from what it was in German times.

The Albertina library, which contained the municipal library in 1900, was situated on Dritte Fliess Strasse and contained over 230,000 volumes. Also on Dritte Fliess Strasse was the Palaestra Albertina, established in 1898 for the encouragement of the higher forms of sport among the students and citizens. Nearby were the government offices, adorned with mural paintings by Knorr and Schmidt. In 1900, the university had 900 students.

During the university's last years, the Albertina faculty and the German Student Union after the territorial separation of the Province of East Prussia by the Treaty of Versailles stressed its affiliation with the Reich, pushing the intellectual life towards German nationalism. On 10 July 1944, the university celebrated its 400th anniversary in presence of Reich Minister Walther Funk. A few weeks later, during the nights of 26/27 and 29/30 August, Königsberg was extensively bombed by the Royal Air Force. From January to April 1945 the city was further devastated by the East Prussian Offensive of the Red Army and the final Battle of Königsberg. When General Otto Lasch signed the capitulation on April 9, the historic inner city was destroyed by the attacks, and 80% of the university campus laid in ruins. The faculty had fled, many of them were received at the University of Göttingen. 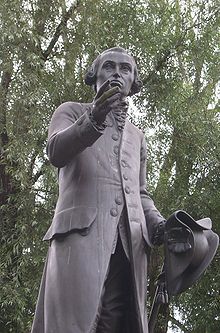 Statue of Immanuel Kant, first exhibited by Christian Daniel Rauch in 1864. Removed in 1945, a replica was restored to the former Paradeplatz area in 1992. 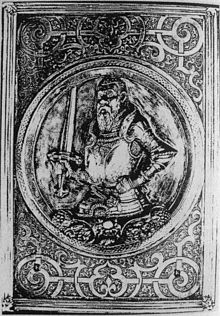 Albert of Prussia on the book cover on one of the books of the famous Silberbibliothek ("silver library") which was part of the university library. Like the equally famous Wallenrodt library it is lost since 1945.