The Russian Academy of Sciences (Russian: Росси́йская акаде́мия нау́к, Rossi'iskaya akade'miya nau'k, shortened to РАН, RAN) consists of the national academy of Russia and a network of scientific research institutes from across the Russian Federation as well as auxiliary scientific and social units like libraries, publishers and hospitals.

Headquartered in Moscow, the Academy is incorporated as a civil, self-governed, non-commercial organization[1] chartered by the Government of Russia. It combines members of RAS (see below) and scientists employed by institutions.

Academy of Sciences headquarters in Saint Petersburg on Universitetskaya Embankment.

The Russian Academy of Sciences consists of a large number of research institutions, including:

Member institutions are linked by a dedicated Russian Space Science Internet (RSSI). The RSSI, starting with just 3 members, now has 3100 members, including 57 of the largest research institutions.

Russian universities and technical institutes are not under the purview of the RAS (they are subordinated to the Ministry of Education of Russian Federation), but a number of leading universities, such as Moscow State University, St. Petersburg State University, Novosibirsk State University and the Moscow Institute of Physics and Technology, make use of the staff and facilities of many institutes of RAS (as well as of other research institutions); the MIPT faculty refers to this arrangement as the "Phystech System".

The Academy is also increasing its presence in the educational area. In 1990 the Higher Chemical College of the Russian Academy of Sciences was founded, a specialized university intended to provide extensive opportunities for students to choose an academic path.

The Academy gives a number of different prizes, medals and awards among which:[7] 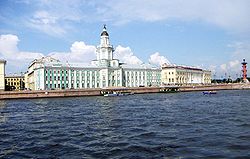 Expeditions to explore remote parts of the country had Academy scientists as their leaders or most active participants. These included Vitus Bering's Second Kamchatka Expedition of 1733–43, expeditions to observe the 1769 transit of Venus from eight locations in Russian Empire, and Peter Simon Pallas's expeditions to Siberia.

In December 1917, Sergey Fedorovich Oldenburg, a leading ethnographer and political activist in the Kadet party, met with Lenin to discuss the future of the Academy. They agreed that the expertise of the Academy would be applied to addressing questions of state construction, while in return the Soviet regime would give the Academy financial and political support. By early 1918 it was agreed that the Academy would report to the Department of the Mobilisation of Scientific Forces of the People's Commissariat for Education which replaced the Provisional Government's Ministry of Education.

In 1925 the Soviet government recognized the Russian Academy of Sciences as the "highest all-Union scientific institution" and renamed it the Academy of Sciences of the USSR. However starting in 1928 the Politburo started to interfere in the affairs of the Academy. By the summer of 1929, Yuri Petrovich Figatner headed a special government commission to investigate the academy and purge it of "counter-revolutionaries," turning it into a Stalinist organization. Figatner's commission originally included Sergey Oldenburg, but he was sacked for "obstructing the reconstruction of the Academy of Sciences". By the end of 1929 its had sacked 128 members of staff out of 960 with a further 520 supernumeraries from 830 also being dismissed. In the following year over 100 people (mainly scholars and humanists, including many historians) were charged in what is called the Academics' Case. Former Academicians such as G.S. Gabaev, A.A. Arnoldi, Nikolai Antsiferov, had already been exiled or imprisoned, but were also put on trial. On 8 August 1931 the Collegium of Joint State Political Administration Board condemned 29 people, including S.V. Bakhrushin, V.N. Beneshevich, D.N. Egorov, Y.V. Gautier, N.V. Izmaylov, Nikolai Likhachev, M.K. Lyubavsky, A.M. Mervart, Sergey Platonov, S.V. Rozhdestvensky, Yevgeny Tarle. In 1931 the Joint State Political Administration Board imposed another wave of punishments on research officers of various establishments of the Academy of Sciences, Russian Museum, Central Archives and others. This included A.A. Byalynitsky-Birulya, A.A. Dostoevsky, B.M. Engelgardt, N.S. Platonova, M.D. Priselkov, A.A. Putilov, S.V. Sigrist, F.F. Skribanovich, S.I. Tkhorzhevsky and A.I. Zaozersky). Some former Guards officers, who worked for the Academy of Sciences such as A.A. Kovanko and Y. A. Verzhbitsky, were executed by shooting. N.V. Raevsky, P.V. Wittenburg and D.N. Khalturin who had organized various expeditions, the priests A.V. Mitrotsky, M.V. Mitrotsky, and M.M. Girs (the church group), Professor E.B. Furman, Pastor A.F. Frishfeld (the German group) and F.I. Vityazev-Sedenko, S.S. Baranov-Galperson and E.G. Baranov-Galperson (the publishers group) were also punished.[9]

Smaller commissions investigated institutions, thus the Commission for the Reorganisation of KIPS and the Museum of Anthropology and Ethnography subjected these organisations to "socialist criticism".[10]

In 1934 the Academy headquarters moved from Leningrad (formerly Saint Petersburg) to the Russian capital, Moscow, together with a number of academic institutes.

At the end of and first year after World War II the Academy consisted of 8 divisions (Physico-Mathematical Science, Chemical Sciences, Geological-Geographical Sciences, Biological Science, Technical Science, History and Philosophy, Economics and Law, Literature and Languages); 3 committees (one for coordinating the scientific work of the Academies of the Republics, one for scientific and technical propaganda, and one for editorial and publications), two commissions (for publishing popular scientific literature, and for museums and archives), a laboratory for scientific photography and cinematography and Academy of Science Press departments external to the divisions; 7 filials (Azerbaijan, Kazakhstan, Kirghizia, Tadzhikistan, Turkmenistan, Urals, and West Siberian), and 8 independent of central Academies in Ukraine, Belorussia, Armenia, Georgia, Lithuania, Uzbekistan, Latvia, and Estonia.[11]

The USSR Academy of Sciences helped to establish national Academies of Sciences in all Soviet republics (with the exception of the Russian SFSR and the Ukrainian State), in many cases delegating prominent scientists to live and work in other republics. In case of Ukraine, its academy was formed by local Ukrainian scientists and prior to the occupation of the Ukrainian People's Republic by Bolsheviks. These academies were:

After the dissolution of the Soviet Union, by decree of the President of Russia of December 2, 1991, the institute once again became the Russian Academy of Sciences,[1] inheriting all facilities of the USSR Academy of Sciences in the territory of Russia.

near the academy building there the central monument of Yuri Gagarin in the square by his name.

Presidents of the Saint Petersburg, USSR, and Russian Academies of Sciences

The following persons occupied the position of the Academy's President (or, sometimes, Director):[12][13]