Frederick William Victor Augustus Ernest (German: Friedrich Wilhelm Victor August Ernst) (6 May 1882 – 20 July 1951) of the House of Hohenzollern was the last Crown Prince of the Kingdom of Prussia and the German Empire. He was colloquially known as William or Wilhelm throughout Europe.

William was born in the Marmorpalais of Potsdam in the Province of Brandenburg. He was the eldest son of Wilhelm II, German Emperor (1859–1941) and his first wife Princess Augusta Viktoria of Schleswig-Holstein (1858–1921). When he was born, he was third in line for the throne, behind his grandfather and father, as the reigning emperor was his great-grandfather, William I. He was the eldest of the Kaiser's seven children, and his birth sparked an argument between his parents and grandmother. Before William was born, his grandmother had expected to be asked to help find a nurse, but since her son did everything he could to snub her, Wilhelm asked his aunt Helena to help. His mother was hurt and his grandmother furious.[1] When his great-grandfather and grandfather died in 1888, he became the heir to the German throne.

William was a supporter of football, then a relatively new sport in the country, donating a cup to the German Football Association in 1908 and thereby initiating the Kronprinzenpokal, the oldest cup competition in German football.[2]

Despite being raised within militaristic circles, the Crown Prince had little command experience when he was named commander of the 5th Army in August 1914, shortly after the outbreak of World War I. In November 1914 William gave his first interview to a foreign correspondent and the first statement to the press made by a German noble since the outbreak of war.[3][4] He said this in English:

"Undoubtedly this is the most stupid, senseless and unnecessary war of modern times. It is a war not wanted by Germany, I can assure you, but it was forced on us, and the fact that we were so effectually prepared to defend ourselves is now being used as an argument to convince the world that we desired conflict."
—Crown Prince Wilhelm, Wiegand[3][4]

He led the 5th Army until November 1916, a two-year period which included the battle of attrition known as the Verdun Offensive. From April 1916 onward, he tried in vain to convince the supreme command that the Verdun offensive no longer made any sense, but the campaign continued until 2 September of that year.

After the German revolution 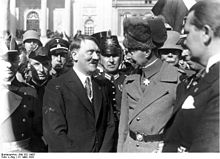 After the outbreak of the German Revolution in 1918, both Emperor William II and the Crown Prince signed the document of abdication. The Crown Prince went into exile on the island of Wieringen, in the Netherlands. In 1923, he returned to Germany after giving assurances that he would no longer engage in politics. The former Crown Prince held some political ambitions, and was reportedly interested in the idea of running for Reichspräsident as the right-wing candidate opposed to Paul von Hindenburg in 1932, until his father forbade him from acting on the idea.[citation needed]

The Crown Prince supported Hitler for some time, hoping and announcing in public that this man would do for Germany what Mussolini had done for Italy - make an end to all Bolshevist/Marxist influence. He had connections with some organisations more than loosely connected with the Nazi Party and allowed himself to be used by the Nazi government in various symbolic actions.[citation needed] After the murder of his friend, the former Chancellor Kurt von Schleicher, in the Night of the Long Knives (1934), he retreated from all political activities. Most of his efforts from 1919 until 1934 had been directed to making a return of the Hohenzollerns to the throne a viable option, and he had assumed that Hitler would give this idea his support.[citation needed]

William lived as a private citizen on his family's estates throughout World War II. Upon his father's death in 1941, he succeeded him as head of the House of Hohenzollern, the former German imperial dynasty. In 1951, the former Crown Prince died of a heart attack in Hechingen, in the ancestral lands of his family in Swabia, as the family's estates in Brandenburg had been occupied by the Soviet Union.[citation needed] William and his wife are buried at Hohenzollern Castle.[5] 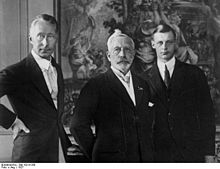 With his father and his son Prince Wilhelm in 1927 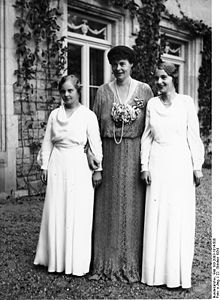 His wife and daughters in 1934

William married Duchess Cecilie of Mecklenburg-Schwerin (20 September 1886 – 6 May 1954) in Berlin on 6 June 1905. Cecilie was the daughter of Grand Duke Frederick Francis III of Mecklenburg-Schwerin (1851–1897) and his wife, Grand Duchess Anastasia Mikhailovna of Russia (1860–1922). Their eldest son, Prince Wilhelm of Prussia, was killed fighting for the German Army in France in 1940. However, during the early stages of his marriage the crown prince had a brief affair with the American opera singer Geraldine Farrar, and he later had a relationship with the dancer Mata Hari.[citation needed]

Their children and male-line grandchildren are:

Their surviving descendants are also in the Line of British succession.