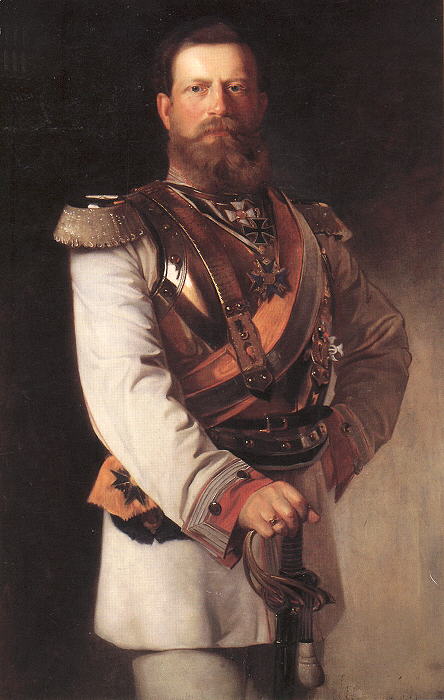 He was married to Princess Victoria, the daughter of British Queen Victoria. Frederick, despite following his family's militaristic tradition, had liberal tendencies due to his ties with Britain and his time growing up during the . Frederick III's reign was anticipated by liberal Germans and British alike in the hopes of liberalizing the German Empire. He opposed often and spoke out against his policy of unifying Germany through military might. Frederick also wrote of limiting the power of Bismarck's Chancellor position, however his illness prevented him from enacting most policies about which he spoke. After his largely ineffectual reign, his successor, William II, abandoned any path toward liberalization that Frederick III previously leaned towards.

The timing of his death and the length of his reign have remained important topics among historians today. Many historians feel that Frederick would have enacted the liberal policies of which he dreamed and would have liberalized Germany earlier. Their argument is that an earlier, more liberal Germany with a more liberal leader could have potentially prevented . On the other hand, contrasting historians argue that Frederick either would not have enacted his promised policies due to his obedience to his father and Bismarck, or could not because of the German political climate being unfavorable to liberalism at the time.

Frederick William, as he was known before he assumed the throne, was born in the New Palace at , a scion of the . His father, Prince William of Prussia was a younger brother of King . Prussia, at the time, was recovering militarily and otherwise from the aftermath of the Napoleonic Wars.

The Hohenzollern family traditionally valued a military education. It was Frederick's mother that insisted that her son be educated according to liberal ideas. Therefore his education was closely supervised and extremely thorough. He was a talented student and was particularly good at foreign languages. He became fluent in English and French and also studied Latin as well as History, Geography, Physics, Music and Religion. Frederick was also good at gymnastics and became a very good rider as required of a Prussian Prince.

As early as 1851, there were plans to marry Frederick to of Great Britain and Ireland, the eldest daughter of Queen Victoria and Prince Albert of Saxe-Coburg and Gotha. At the christening of the future King Edward VII, Frederick's uncle, King , was godfather and had also dandled the Princess Royal on his knee. The Royal dynasty in Britain was predominantly German; there was little British blood in Queen Victoria and none in her husband.

* [http://books.google.com/books?id=16apGAAACAAJ "The War Diary of the Emperor Frederick III, (1870-1871)"] By Frederick III, translated and edited by Alfred Richard Allinson. New York, Frederick A. Stokes Company, 1927. - This is the translated collection of the then Crown Prince Frederick's war diaries that he kept during the Franco-Prussian War.