Daniel Klein (grammarian)
This article is about a grammarian of the Lithuanian language. For other uses, see Daniel Klein. 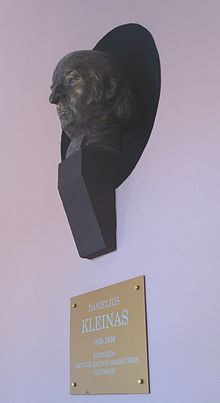 A sculpture of Klein in the Vilnius University

Daniel Klein (Lithuanian: Danielius Kleinas) (1609–1666) was a Lutheran pastor and scholar from Tilsit, Duchy of Prussia, who is best known for writing the first grammar book of the Lithuanian language.

Klein studied philosophy, theology, Greek and Hebrew in the University of Königsberg. In 1637 he became a Lutheran pastor.

In 1653 Klein published the first grammar book of the Lithuanian language (Gammatica Litvanica), written in Latin. Klein coined the distinctive Lithuanian letter Ė.[1] He also wrote a Lithuanian dictionary, but it was left unpublished.

Klein published collections of Lithuanian hymns (Lit. giesmes), some of which he wrote himself.