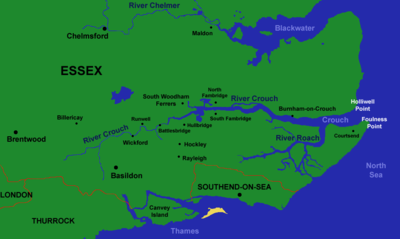 The course of the River Crouch

The River Crouch is a river that flows entirely through the English county of Essex.

The distance of the Navigation between Holliwell Point which is north of Foulness Island and Battlesbridge is 17.5 Miles, i.e. 15.21 Nautical Miles.

The Crouch rises in Little Burstead [1]. It runs parallel with the A176 (Noak Hill Road) for approximately 1.3 miles (2.1 km) and then follows a generally easterly course, passing by, near or through:

The river flows into the North Sea between Holliwell Point (grid reference TR026963) and Foulness Point (TR048954) on its north and south banks respectively.[3]

A major tributary of the River Crouch is the River Roach.

The River Crouch Conservation Trust was set up in July 2009 by a group of concerned local people, mainly fisherman, after a stretch of the river around Memorial Park, Wickford was badly polluted. Its aim is to clear the river of rubbish and to bring the river back to a quality which will benefit all forms of wildlife, from water voles, fish to invertebrates and for the benefit of the public.[4]

The Crouch Harbour Authority is the statutory harbour and navigation authority for the Rivers Crouch and Roach, controlling both pleasure and commercial use of the rivers. The authority passes bylaws that regulate use of the river and employ staff that enforce the bylaws. They also provide weather forecasts, tide tables and other important sailing information.

The Harbourmaster's Office is on the Quay at Burnham on Crouch.