Mount Auburn Cemetery was founded in 1831 as "America's first garden cemetery", or the first "rural cemetery", with classical monuments set in a rolling landscaped terrain.[2] The appearance of this type of landscape coincides with the rising popularity of the term "cemetery," which etymologically traces its roots back to the Greek for "a sleeping place." This language and outlook eclipsed the previous harsh view of death and the afterlife, pictorialized in old graveyards and church burial plots.[3] The 174-acre (70 ha) cemetery is important both for its historical aspects and for its role as an arboretum. Most of the cemetery is located in Watertown, Massachusetts, though the 1843 granite Egyptian revival entrance lies in neighboring Cambridge, adjacent to the Cambridge City and Sand Banks Cemeteries.

Bigelow came up with the idea for Mount Auburn as early as 1825, though a site was not acquired until five years later.[5] Bigelow, a medical doctor, was concerned about the unhealthiness of burials under churches as well as the possibility of running out of space.[6] With help from the Massachusetts Horticultural Society, Mount Auburn Cemetery was founded on 70 acres (280,000 m2) of land authorized by the Massachusetts Legislature for use as a garden or rural cemetery.[7] The purchase of the original land cost $6,000; it later extended to 170 acres (0.69 km2). The main gate was built in the Egyptian Revival style and cost $10,000.[8] The first president of the Mount Auburn Association, Joseph Story, dedicated the cemetery in 1831.[6] 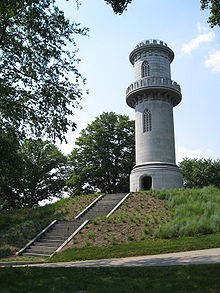 The main tower in the Cemetery

Mount Auburn was established at a time when Americans had a sentimental interest in rural cemeteries.[9] It is still well known for its tranquil atmosphere and accepting attitude toward death. Many of the more traditional monuments feature poppy flowers, symbols of blissful sleep. In the late 1830s, its first unofficial guide, Picturesque Pocket Companion and Visitor's Guide Through Mt. Auburn, was published and featured descriptions of some of the more interesting monuments as well as a collection of prose and poetry about death by writers including Nathaniel Hawthorne and Willis Gaylord Clark.[9] Because of the number of visitors, the cemetery's developers carefully regulated the grounds: They had a policy to remove "offensive and improper" monuments and only "proprietors" (i.e., plot owners) could have vehicles on the grounds and were allowed within the gates on Sundays and holidays.[9]

More than 93,000 people are buried in the cemetery as of 2003.[8] A number of historically significant people have been interred there since its inception, particularly members of the Boston Brahmins and the Boston elite associated with Harvard University as well as a number of prominent Unitarians.

The cemetery is nondenominational and continues to make space available for new plots. The area is well known for its beautiful environs and is a favorite location for Cambridge bird-watchers. Guided tours of the cemetery's historic, artistic, and horticultural points of interest are available.

Mount Auburn's collection of over 5,500 trees includes nearly 700 species and varieties. Thousands of very well-kept shrubs and herbaceous plants weave through the cemetery's hills, ponds, woodlands, and clearings. The cemetery contains more than 10 miles (17 km) of roads and many paths. Landscaping styles range from Victorian-era plantings to contemporary gardens, from natural woodlands to formal ornamental gardens, and from sweeping vistas through majestic trees to small enclosed spaces. Many trees, shrubs, and herbaceous plants are tagged with botanic labels containing their scientific and common names.

The cemetery was among those profiled in the 2005 PBS documentary A Cemetery Special.

A panoramic view of the Boston Skyline as seen from the Washington Tower at Mt. Auburn. 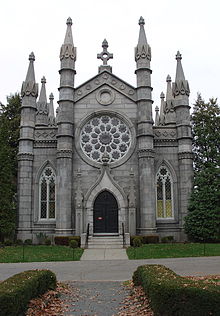